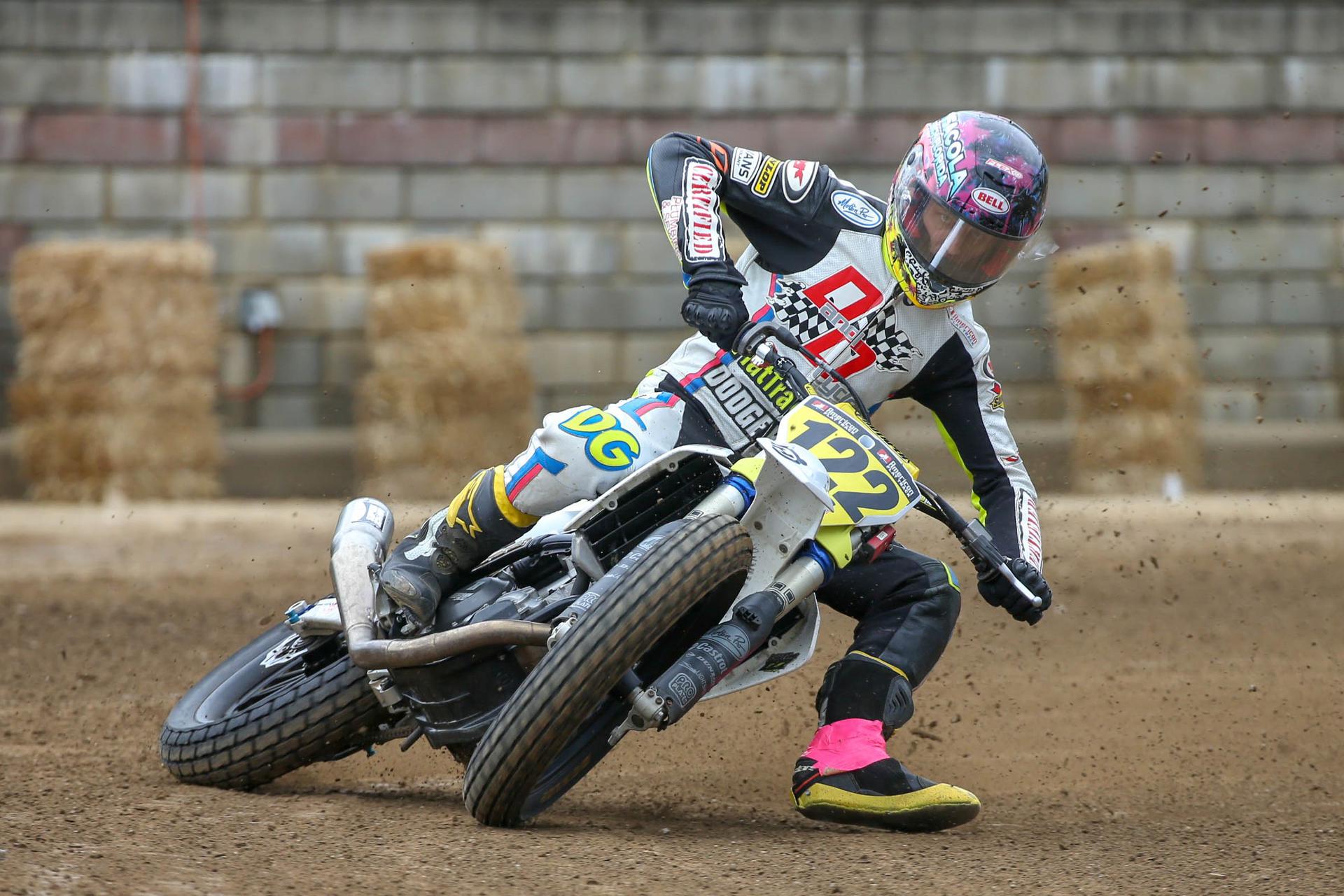 The action at the Illinois State Fairgrounds was every bit as tense and frenetic as one would expect an Roof Systems AFT Singles Short Track showdown to be. In the midst of a tight title fight with just three additional races remaining on the 2019 American Flat Track calendar, and serving as a microcosm of the season to date, while a handful of riders enjoyed their moments in the spotlight. Ultimately it all came down to Gauthier and reigning class champion Dan Bromley (No. 1 Red Bull KTM Factory Racing 450 SX-F).

Former AFT Twins presented by Vance & Hines standout Chad Cose (No. 49 Ritchie Reynolds/American Suzuki RM-Z450) stormed to the holeshot and threatened to break free of the chaos before anyone else had an opportunity to react. However, Gauthier rolled forward on the momentum he had built up all day long when he ran quickest in both qualifying sessions and ripped to heat and semi victories.

Gauthier first slashed ahead of Spanish dirt track hero Ferran Cardús (No. 377 Bullet Strong Racing/Vanilla Cycles Honda CRF450R) to move into third and then ran up the inside of Bromley to take over second on lap 7. By lap 10, he was hounding Cose inside and outside, applying heavy pressure wherever possible in hopes of prompting a mistake.

That mistake came on lap 13. Gauthier squared up Cose and the two very nearly came together on the short straight as Gauthier slid ahead into first. Once clear, the new leader was able to call on his superior pace to pull open just enough of a gap to negate the possibility of a potential last-lap Hail Mary.

Title rival Bromley was going in the opposite direction, dropping down to fourth after he was also overhauled by Peoria TT winner Dallas Daniels (No. 163 Estenson Racing Yamaha YZ450F).

16-year-old prodigy Daniels had earned the pole but was shuffled back to seventh early. Undeterred, he clawed his way through the fray, not only edging ahead of Bromley but lining up Cose for the runner-up position.

Desperate to minimize the championship damage done by another Gauthier victory, Bromley turned in a clutch sequence of his own. With time running out, the defending champ dove up the inside of Daniels and Cose in two consecutive corners to leap up from fourth to second in one short lap. From there he held on to the checkered flag to remain within five points of Gauthier for the Roof Systems AFT Singles championship lead (241-236).

The victory was Gauthier’s third of the season. After the race, he said, “It’s huge. Coming into these last few races, it’s anyone’s game. I’m trying to get in front of Dan as much as I can, but he’s running strong. We’re having fun.

“Chad rode a really great race. It took me a few laps to catch him, but he was riding defensively. I just waited. I knew I had a few laps to go so I just waited for the mistake. He made one, and we got pretty close, but it was clean racing.”

Of his two-in-one-lap maneuver, runner-up Bromley said, “I just used my size to my advantage. It was a heck of a race. Chad got out front, and whether he’s behind you or you’re behind him, you never know what he’s going to do. He ran a good race. He, Dalton, and Dallas were out front for most of the race.

“It’s a little bittersweet to be in second, but I’m happy to be back up here on the podium.”

Daniels secured his second consecutive podium, in third, in what was just his sixth-career AFT outing, while Cose ended up one spot off the box after leading the majority of the laps.

Meanwhile, Mikey Rush (No. 15 RMR Honda/Red Riders Rewards Honda CRF450R) kept his championship aspirations alive in fifth. While the bulk of the focus is understandably on Gauthier and Bromley, Rush remains very much in contention. He’s within striking distance — just 25 points back of the lead (216) — with a Half-Mile and two Miles left to decide the 2019 crown.

Catch the extended feature broadcast of the Springfield weekend on NBCSN with a special 90-minute telecast. As usual, there will be flag-to-flag coverage of the Main Events, enhanced by exclusive features and cutting-edge aerial drone and onboard footage. The broadcast will debut on Sunday, September 8, at 1:30 p.m. ET/10:30 p.m. PT and will re-air on Thursday, September 19, at 1:00 p.m. ET/10:00 a.m. PT.

MXGP’s new one-day format presented its challenges at the 12th round of the series with the event taking place at an unfamiliar track in Madrid, Spain. Monster Energy Yamaha Factory MXGP’s Jeremy Seewer and Gautier […]