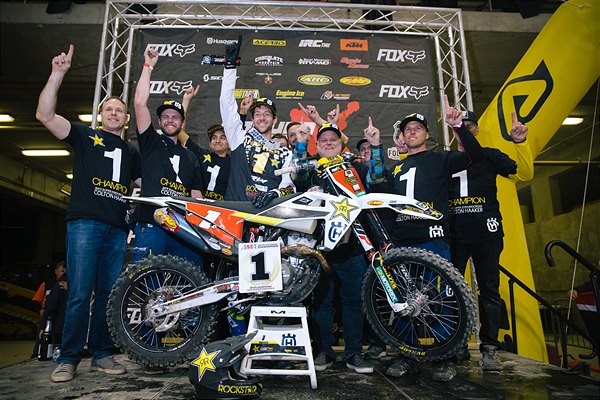 Rockstar Energy Husqvarna Factory Racing’s Colton Haaker was crowned 2019 AMA Super EnduroCross Champion on Saturday night after coming out victorious with a 1-1-2 overall finish from the season finale in Nampa, Idaho.
The now three-time Super EnduroCross Champion (2016, ‘18, ‘19) powered his way to the front of the pack in Moto 1 but he ran into an issue that dropped him outside the top-five by the second lap. He quickly battled his way through the pack to bring himself back up to second by the halfway point and he moved into first with two laps to go to claim the first win of the night.
In the second moto, riders were inverted from the race one results, which placed Haaker in the second row off the start. He battled his way into the top-five despite the unfavorable start position and he continued to work his way up to first by lap three. Haaker maintained a steady pace for the remainder of the nine-lap race to go on to claim the Moto 2 victory.
Haaker knew he was sitting in a favorable position heading into the third and final race of the night but he still had to be smart about his performance. Off the start, he immediately jumped into the front position and led the first three laps of the race. He engaged I a head-to-head battle with Taddy Blazusiak in the second half of the race and with a championship in mind, Haaker played it safe and finished second in the final moto to claim his second-consecutive championship in the series.
Haaker: “It feels good to win my third championship in the series. Although it was a shortened series this year, the competition was still fierce and the new three-moto format kept things exciting and allowed us to showcase some intense racing for the fans. I can’t thank everyone who supports me enough!”

Honda Racing focused on the Isle of Man TT races

May 23, 2019 Michael Le Pard News Comments Off on Honda Racing focused on the Isle of Man TT races

Fresh from the International North West 200, the Honda Racing team is preparing to head to the Isle of Man for the legendary TT races, where Ian Hutchinson and David Johnson will contest the […]

World Superbike took to the track again today after the long summer break, which has lasted since the previous round in the USA in mid-July. The mid-season appointment was two days of collective testing at […]