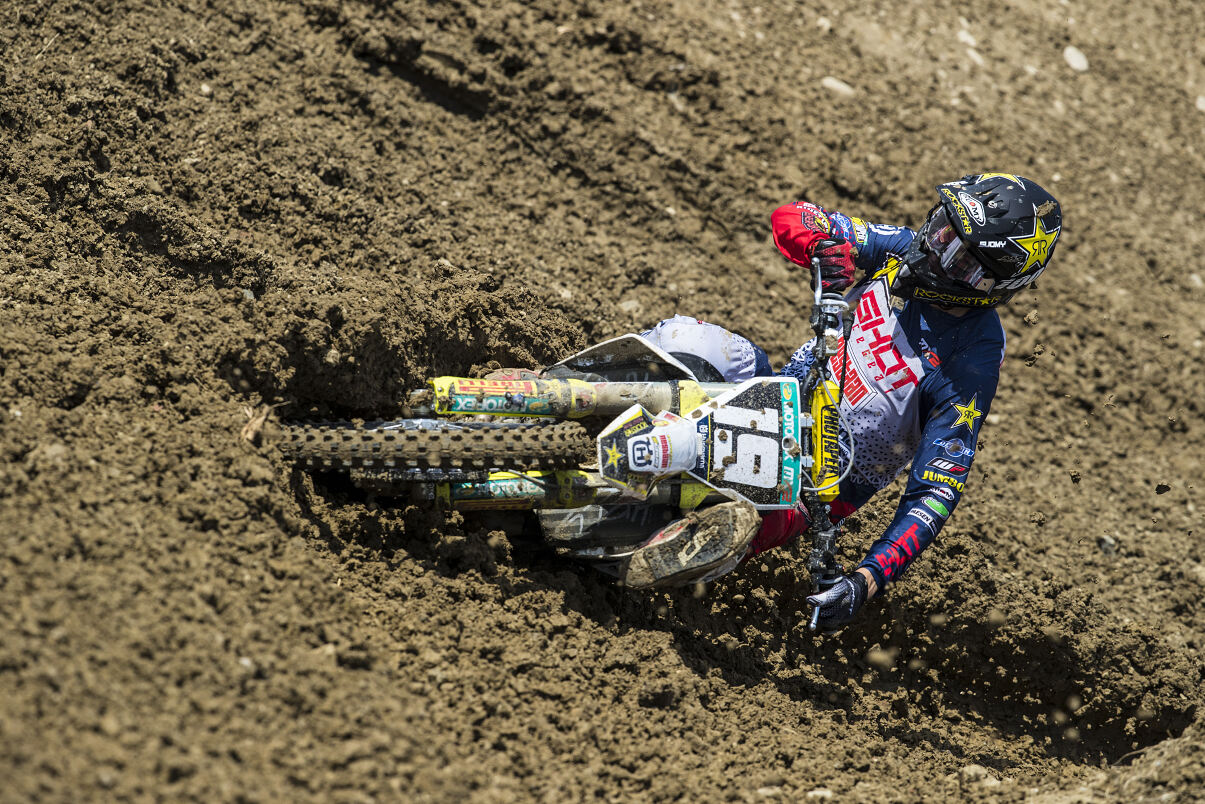 A third-place result in Saturday’s qualifying race gave Thomas Kjer Olsen an advantageous gate pick for Sunday’s motos. A strong start in MX2 race one took the FC 250 rider into fourth place on the hard pack Imola track, where he immediately set about chasing down the top three. With third-placed Tom Vialle going down, Kjer Olsen moved up a place before claiming second by the end of lap four. Riding consistently for the remainder of the moto, slowly increasing the gap over the riders behind, TKO completed the 19-lap race as runner-up and less than 10 seconds from the win.

Race two unfolded similarly to the first with Kjer Olsen again getting another strong start by charging through to third from the gate-drop. Pushing hard, the Dane moved into second where he was unchallenged for the rest of the gruelling 19-lap race. In claiming second overall, Thomas further increases his advantage over the third-placed rider in the MX2 championship standings.

In the MXGP class, both Rockstar Energy Husqvarna Factory Racing riders put in strong performances with Pauls Jonass ending the day in fifth overall. Race one saw the former MX2 World Champion sixth from the start and with the front runners all fighting for position, riders swapped places for the first few laps before settling down to a solid rhythm. Pauls, locked in a battle for the final podium position, unfortunately made a small mistake that dropped him down to seventh and into the clutches of his hard-charging teammate. The two Rockstar Energy Husqvarna riders enjoyed a strong pace for the remainder of the race, swapping places several times. At the flag, it was the Latvian who had the upper hand, crossing the line to finish sixth, with Jasikonis one place behind in seventh.

Jonass made a better start in the second moto, placing fourth on lap one. The battle for the podium spots was intense over the first few laps with riders jostling for position on the technically demanding track. Spending over half of the 20-lap race in fourth, Pauls was passed with just five laps to go but successfully defended his fifth place to the line to secure fifth place overall. Jasikonis, who was racing at Imola for the first time, held on to a top-10 position for the majority of the race but unfortunately dropped to 13th at the finish after a mistake in the closing stages caused him to leave the track and re-join.

The Rockstar Energy Husqvarna Factory Racing team will next be in action at round 16 of the FIM Motocross World Championship, the MXGP of Sweden, on August 25.

Thomas Kjer Olsen: “It feels amazing to be back on the podium, Lommel was a really tough race for me so to be able to come back here for second is great. We made some changes to the bike for the race here and they really seem to have worked out well. The team have done a great job to get me feeling comfortable on the bike and I think it shows today, even on such a demanding track like this one. I gave it my all out there today, had some great battles and I’m happy to finish on the podium.”

Pauls Jonass: “Overall the weekend went well for me, I’m happy with fifth but felt we could have gone a little better. I got good starts in both races so that is really positive and then I was able to run near the front too. We were able to identify a few places where I was losing a little time and I know I still need to work on my strength for riding the 450, especially on a technical surface like today. The track was heavy going and quite slippery in places, like on the take off to the jumps – a lot of the time you had to fire out the corners really hard to clear them and that was pretty tricky. We had good pace today and a good set up – just need to work on bringing it all together and keeping smooth for the whole race. It’s Sweden next, which is one of my favourite circuits, so I’m looking forward to that.”

Arminas Jasikonis: “It’s been a tough meeting for me, I had some issues in practice and qualifying didn’t go too well, but I knew I had a good pace for today’s races. In race one I didn’t get the best start but was able to push and fought my way through to Pauls. We had a good battle but he got me right before the end. Race two was the same from the start, I was lying inside the top 10 for most of the race but began to get really tired towards the end. I made a mistake over one of the jumps and had to loop around off track to get back on – I lost a few places there. Overall I’m happy but need to work on a few things before Sweden.”

Championship Standings – After Round 15

Monster Energy Yamaha MotoGP Travel to Texas for Round 3

The Monster Energy Yamaha MotoGP Team have made their way to Austin, Texas in the United States of America for the final fly-away race before the European leg. After the highs and lows at the […]

PETRONAS Yamaha Sepang Racing Team claimed a remarkable first podium in only its seventh MotoGP after a fabulous performance from Fabio Quartararo in the Catalan GP. Quartararo made his debut appearance on the premier class […]