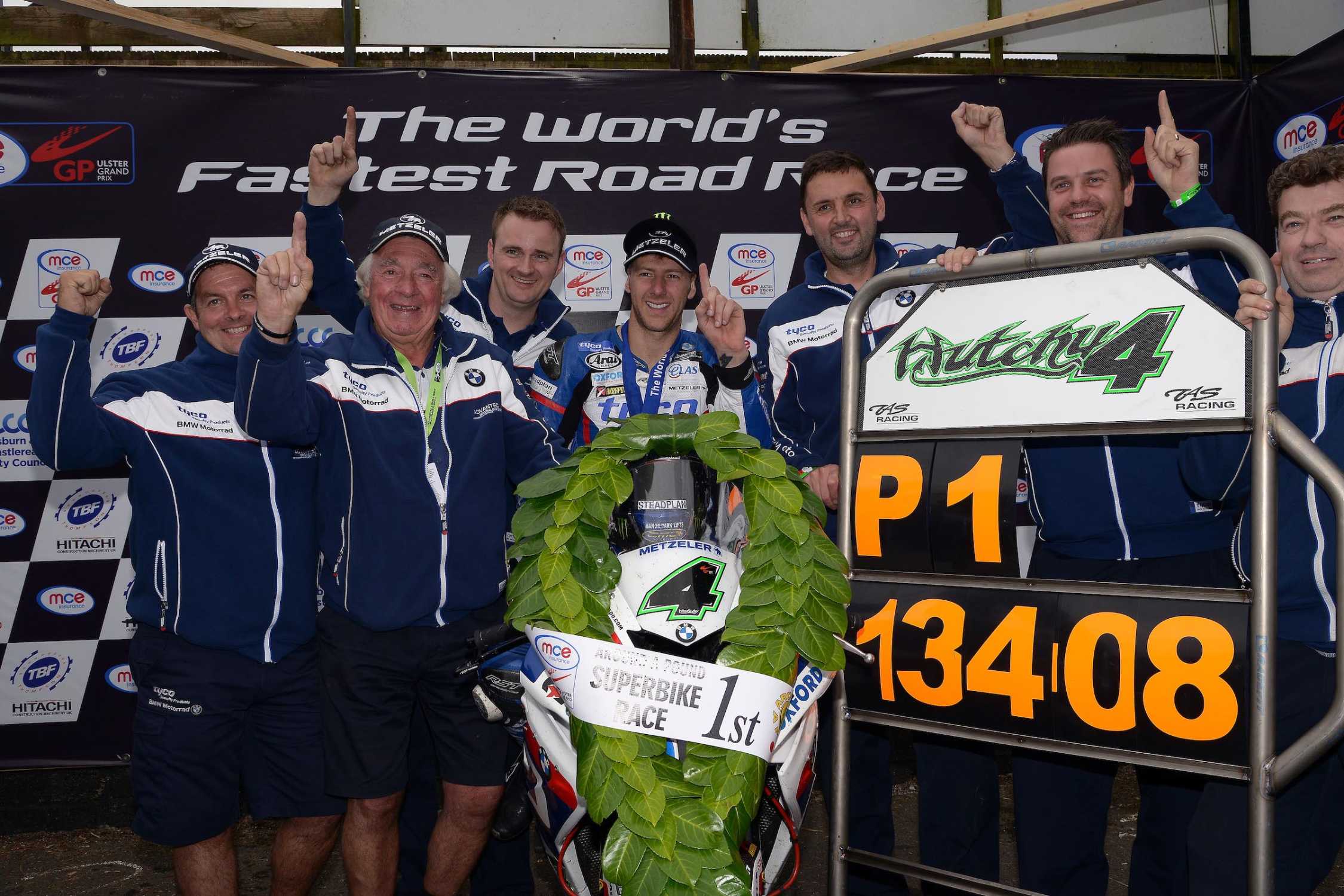 Munich. When the motor racing season resumes, a familiar face will make his comeback on the BMW S 1000 RR: Ian ‘Hutchy’ Hutchinson (GBR). The 16-time TT winner returns to the TAS Racing team, with Team Principal Philip Neill, with whom he will compete in international road races and the British championship under the new banner of SYNETIQ BMW Motorrad. The project is being supported by BMW Motorrad Motorsport.

Hutchinson, BMW Motorrad Motorsport, BMW S 1000 RR and TAS Racing proved to be a successful combination back in 2016 and 2017. “I am delighted to have Ian back in the family,” said BMW Motorrad Motorsport Director, Marc Bongers. “He has enjoyed great success with us in the past. We would obviously have liked this announcement to have been a little more spectacular, and to have had Ian in his leathers on the bike and competing in the North West 200 and the Isle of Man TT. However, we will have to put that on hold for now.”

“I enjoyed my previous spell with TAS Racing on the BMW S 1000 RR,” said Hutchinson. “Now that I’ve secured a deal to return to the TAS team with Philip Neill at SYNETIQ BMW, I’m really looking forward to getting going again.” Team Principal Neill added, “I honestly thought our racing days with Ian had come to an end after our successful partnership through 2016/17. However, we are clearly delighted that Ian was not only available but extremely keen on a return to TAS Racing. People may differ in their opinions on the various riders but one thing everyone can agree on is the utter determination shown by Hutchy time and time again. It never ceases to amaze me the amount of dedication and effort the man puts into his preparation for racing, and for that reason he is the perfect man to lead SYNETIQ BMW into this new chapter of our racing journey.”

Hutchinson enjoys legendary status on the international road racing scene. He laid the foundation for this in 2010 when he became the first rider ever to win all five individual races at the Isle of Man Tourist Trophy – the first time in the history of the classic event, which stretches back over 100 years, that anybody had achieved the feat. However, fate turned against him just a few days later when ‘Hutchy’ severely injured his left leg in a crash in the British championship. It looked as though his career was over. Hutchinson bounced back, returned to racing, and overcame yet more setbacks. Although he broke his left leg again in 2012, he fought his way back into the sport’s elite. He made a much-acclaimed comeback at the Macau Grand Prix in 2013. Hutchinson’s first race back after another injury lay-off was at the infamous ‘Guia Circuit’ – and he promptly marked his comeback with a victory.

“He is a legend,” Bongers confirmed. “I experienced that for myself for the first time in Macau in 2013. The award ceremony took place on the Sunday evening. First to receive their trophies were all the car drivers. They all came up to the podium in their smart-casual outfits and were politely applauded. Then came the motorcyclists, and so on, until Ian Hutchinson was called up to receive his trophy. He was sitting relatively far back in that big hall, and still was not particularly quick on his feet. He was given a standing ovation – all the way, as he slowly made his way to the podium and back – from every person, every team, whether automobile or motorbike, and regardless of brand. Even when I tell the story now, so many years later, it still gives me goosebumps.”

Hutchinson joined the BMW Motorrad Motorsport family in 2016 and competed for TAS Racing in road races and the Superstock class of the British Superbike Championship. Right at the start of the season, Hutchinson won the Superstock race at the North West 200 on his BMW S 1000 RR. Next was the Isle of Man TT, at which he not only won the Superstock TT, but also set a new Superstock lap record.

Hutchinson claimed no fewer than three victories on the RR at the 2016 Ulster Grand Prix and set a new world record when he topped the 134-mph mark in the event’s second Superbike race. In setting an average speed of 134.089 mph, he was crowned the ‘World’s Fastest Road Racer’. ‘Hutchy’ was no less successful at the racetrack that year. He won two races and claimed a total of nine podium finishes in the Superstock class of the BSB. Hutchinson was one of the favourites for the title, despite missing a round that clashed with his road racing commitments.

“For a road racer the TT is the main goal and we won there,” Hutchinson explained looking back. “But we did the same at the North West 200 and also took three wins in a day at the Ulster Grand Prix. That day at Dundrod included earning the accolade of world’s fastest road racers with a 134mph lap. We took Superstock wins on the TAS Racing prepared BMW S 1000 RR at all three major internationals in 2016 and we also got that all-important Superbike win to finish the season on a high.”

As well as those successes, another thing stands out in BMW Motorrad Motorsport Director Bongers’ memories of that 2016 season: “It was in the Superstock race on the Isle of Man, when he set the lap record. Back then, his lap – from a standing start – was only a few seconds slower than Peter Hickman when he subsequently set his new Superbike lap record on a flying lap. That was extremely impressive – a highlight.”

At the 2017 Isle of Man TT, Hutchinson first won the Superbike race, before claiming a dominant victory in the Superstock race. He was also one of the hot favourites in the Senior TT, and was looking to get his third win of the week. Unfortunately, however, he crashed and fractured his left femur. That resulted in another break from racing, but ‘Hutchy’ once again fought back. “It is remarkable how determined and motivated he is, not just to come back and compete, but to challenge for victories,” said Bongers.

A strong future together.

Hutchinson was back in action on the BMW S 1000 RR last November, when he appeared at the 2019 Macau Grand prix for Shaun Muir’s Milwaukee with SMT team. “The preparation time was extremely short, and you only have a very limited amount of riding time in practice in Macau. For that reason, we did not have particularly good results,” said Bongers.

Hutchinson now returns to the BMW Motorrad Motorsport family as a rider for SYNETIQ BMW Motorrad, and Bongers is certain that they can add to the success story together. “He feels right at home on our package. We have also modified our BMW S 1000 RR so that we have the gears on the right side. He has already ridden at a few tests and is still extremely quick. I am confident that he is a podium contender at the road races. And if we have enough time to test – which will hopefully be the case – then he can certainly challenge for the top step of the podium in Macau.”

And what expectations does Hutchinson have? “I enjoyed working with the whole team. It was a good relationship. The same core people are still there, so I see no reason why we cannot pick up from where we left off,” he said. “Having prepared so well in January and February I’m ready to race as soon as it is possible again.”

May 13, 2019 Michael Le Pard News Comments Off on Honda Racing raring to get roads campaign underway at the International North West 200

Honda is ready to get its 2019 road racing campaign underway as Ian Hutchinson and new recruit, David Johnson, have arrived at the International North West 200 ready to kick off proceedings tomorrow.Wrapping up pre-season […]