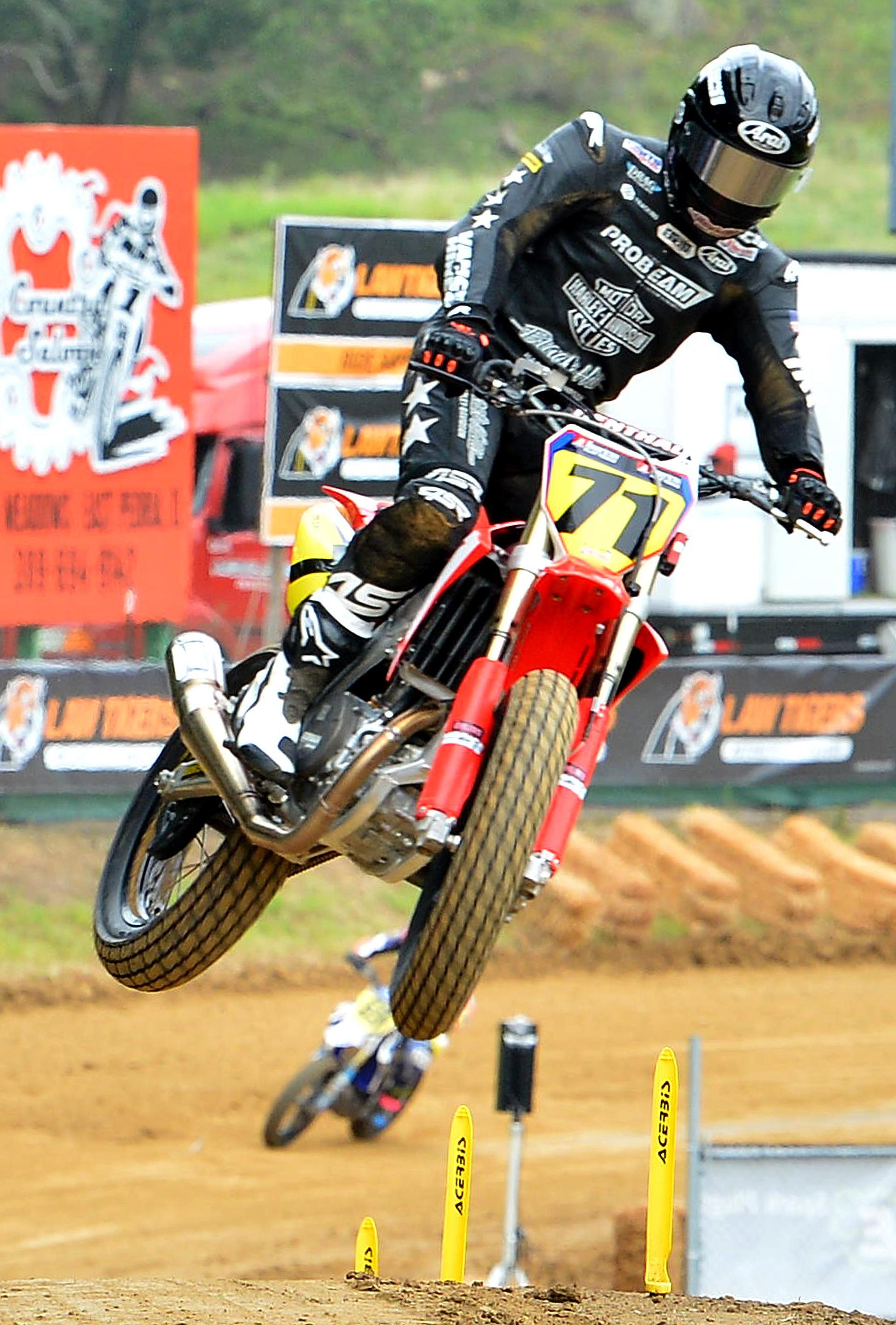 DAYTONA BEACH, Fla. (January 13, 2020) – Latus Motors Racing is set to return to the American Flat Track scene in a major way with the announcement the team has signed James “The Rocket” Rispoli to contest the 2020 AFT Production Twins championship aboard a Harley-Davidson XG750R.

The development represents a dream pairing of a versatile rider with a versatile team who have independently enjoyed monumental success across multiple disciplines of two-wheeled sport.

28-year-old Rispoli is coming off an impressive 2019 season in which he seamlessly returned to his dirt track roots following a decade chasing roadracing wins and championships on both sides of the Atlantic.

Last season, Rispoli scored four podiums in AFT Production Twins action, ultimately finishing sixth in the championship, despite missing the opening round of the title fight. The performance served as a strong reminder of the fan favorite’s natural flat track skills, which he’d previously leveraged to take second overall in the 2009 AFT Singles standings.

Gladstone, Oregon-based Latus Motors Racing has a long association with American Flat Track racing. In the mid-2000s, Latus Motors garnered numerous race wins and top-three championship finishes while serving as the title sponsor for the 2000 Grand National Champion Joe Kopp. Subsequently, Latus and Kopp formed an inhouse Triumph-based effort that finished on the podium in the premier class of American Flat Track racing as recently as 2015.

Like Rispoli, Latus Motors Racing branched out into other forms of motorcycle sport to remarkable results. The team established itself a serious contender on multiple makes and in multiple series, including taking a dramatic triumph in the prestigious DAYTONA 200 in 2011.

Team owner George Latus, said, “I was involved in flat track for a lot of years, and more recently we were heavily involved in roadracing. We kind of put a hold on things for a couple of years, but we saw the direction American Flat Track was going, and it’s moving forward in a very positive way. We were looking to get back into it and recognized the potential of the Harley-Davidson XG750R and the Production Twins class as the perfect way to do that.

“I’ve raced against James for many years. He’s got a great attitude, and he’s a terrific competitor. I’m excited to have the opportunity to work with him.”

Team Manager Kopp said, “One of the big benefits James brings to our program is the electronics knowledge he gained last year helping Vance & Hines to tune the bikes. The way the sport is going, you have to some comfort playing with that stuff, and he’s definitely on top of that more than just about any rider that I know out there. That’s going to be huge.

“We’re excited. We’re going to come out swinging, and I think we’re going to surprise some people for sure with the Harley out there.”

Rispoli said, “I couldn’t be happier with the opportunity to race the XG750R for Latus Motors Racing. My relationship with Mr. Latus goes back a decade when we first discussed the possibility of me riding for his road race team. I’ve raced against his teams for a long time, so I’m very familiar with exactly how well prepared his team is and how serious they are about winning. I’m also thrilled to be working with Joe. I have a huge amount of respect for him, and I was extremely excited when he gave me a call and told me he was looking forward to working with me too.

“Last year’s experience riding and developing the XG750R makes me confident we can fight for wins and the title the 2020. I’ve reunited with personal trainer Richie Perperian — who helped me win two AMA Pro SuperSport championships — to make sure I take maximum advantage of this awesome opportunity. We’re already off and rolling.”

September 27, 2020 Michael Le Pard News Comments Off on No luck for the BMW Motorrad World Endurance Team at 12 Hours of Estoril

Estoril. One year ago, the BMW Motorrad World Endurance Team started its debut season in the FIM Endurance World Championship (FIM EWC) at the Bol d’Or at Le Castellet (FRA). This weekend, the team’s first […]

The five-rider strong Monster Energy Yamaha Rally Official Team has completed the first full day of competition at the 2020 Andalucia Rally, a 309-kilometre stage one that took riders on the first of four looped […]