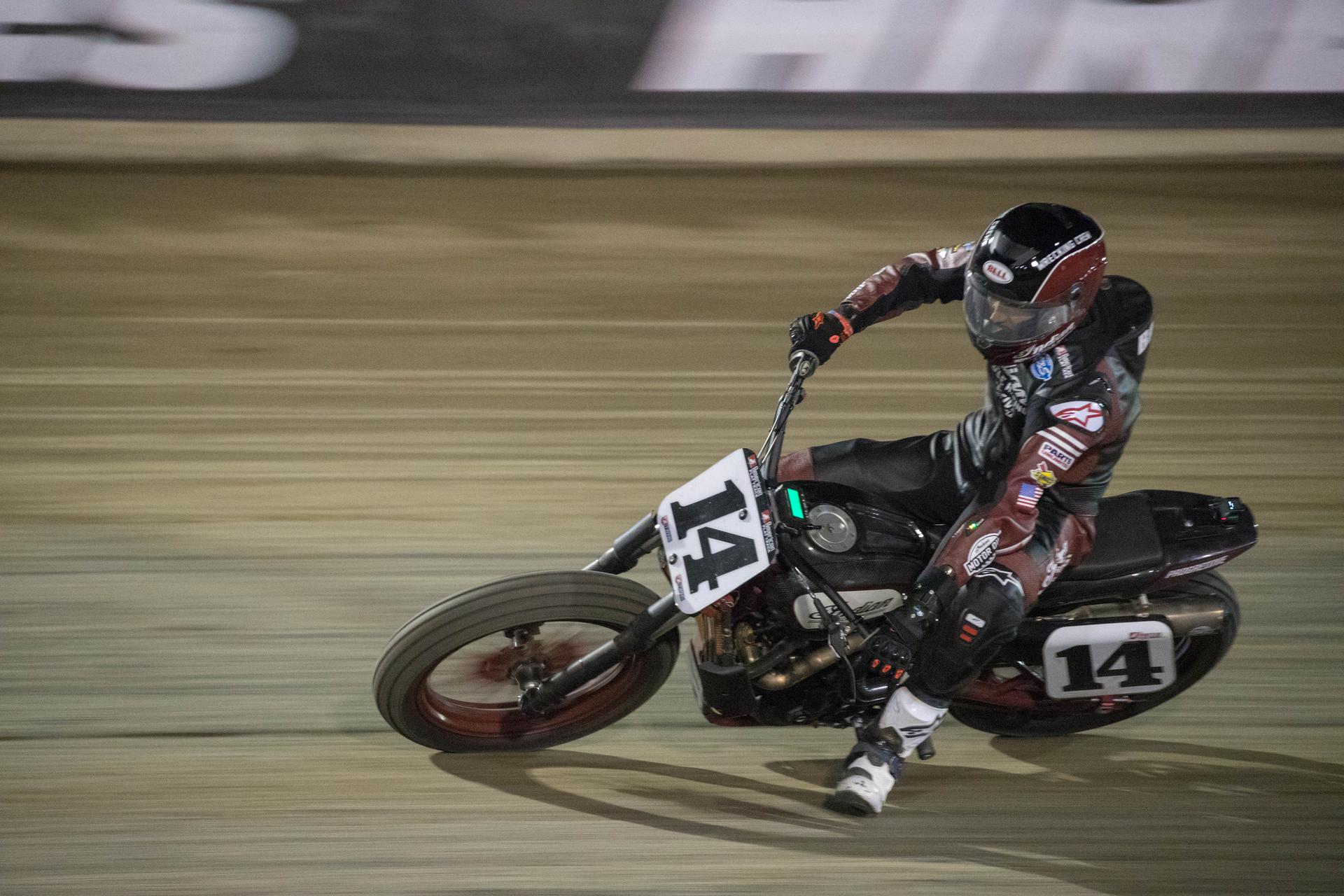 Two rounds ago, the AFT Twins presented by Vance & Hines title leader bounced back from a season’s worst 16th-place result with a blowout win in the New York Short Track. The factory Indian ace replicated that trick at Black Hills Speedway, following up a second 16th-place disappointment in Sunday’s Buffalo Chip TT with yet another convincing triumph.

Bauman led the way practically throughout the once red-flagged and restarted Main, despite being kept honest by Jeffrey Carver Jr. (No. 23 Roof-Systems of Dallas/Indian of Metro Milwaukee FTR750) and brother Bronson Bauman (No. 37 Indian Motorcycle/Progressive Insurance FTR750).

Reigning Champion Jared Mees (No. 1 Indian Motorcycle/Progressive Insurance FTR750) had looked to join that fight up front as well but slid out in Turn 1 while running in fifth position.

Davis Fisher (No. 67 Bob Lanphere Beaverton Motorcycles/Dick Wall 60 Indian FTR750), who was in sixth at the time, was forced to intentionally slam into the airfence in order to avoid striking the fallen Mees. Moments later, Robert Pearson (No. 27 R/J Performance/Hite Trucking Indian FTR750) rode over top of Fisher’s downed machine while taking evasive action himself to avoid hitting both men.

All three eventually returned to their feet, although Fisher’s and Pearson’s bikes were too heavily damaged to take part in the restart. Meanwhile, Mees only narrowly managed to rejoin the fray, returning to the track just before the field had completed the opening lap of the restarted race.

Up front, Bauman fought off an immediate advance from Carver and held strong to the flag, securing his third win of the season by 1.136 seconds. Carver finished second with Bronson Bauman another 0.157 seconds back in third.

“I threw the thing on the ground twice the other night,” race-winner Bauman said. “I owed my team this win times ten. I can’t thank them enough. The motorcycles for me and Bronson were incredible, and we work together so well as a team.

“You dream of this when you’re a kid, but you don’t think it’s ever going to become a reality because you just race because you love it. To be on a team with my brother, and win here in front of some incredible fans, it means a lot.”

Second-ranked Mees managed to pick up 14th-place points for his efforts. However, his championship deficit stretched back out to a rather daunting 32 points (198-166) with seven races remaining on the season.

Cose was seriously hooked up in the return of his still-developing American Suzuki RMZ 450; he was able to exploit multiple lines and had an answer for everything Mischler and Texter threw at him late, including when Texter rode up the inside and alongside him in an attempt to steal away the win in the race’s final several corners.

Cose held it open around the outside and edged Texter to the flag by 0.062 seconds with Mischler just over a half-second back in third.

Cose said, “I don’t know if I want to call it lucky or good or somewhere in between, but the racecraft comes into play. I know she has so much experience at this, and it was a game of cat and mouse. Luckily I crossed the finish line first.”

Gauthier’s race ended in disappointment as he suffered a mechanical DNF while still in contention for the win with just a handful of laps remaining. Meanwhile, his primary title rival, reigning champ Dan Bromley (No. 1 Red Bull KTM Factory Racing 450 SX-F) clawed his way up from 16th on the grid to finish in sixth. As a result, the two are now separated by just 10 points (191-181) following 12 of 18 races.

Ryan Varnes (No. 68 Varnes Racing/RoyBuilt Kawasaki Ninja 650) had been knocking on the door for years, and he finally smashed through it with a lopsided win in Tuesday night’s 15-lap AFT Production Twins Main Event.

Varnes worked the low line to perfection, which, when combined with the R5 Dunlop Motorcycle Tire (Varnes was the only AFT Production Twins rider to ride the softer compound), helped him to power underneath early leader J.R. Addison (No. 24 Smith/Addison Racing Kawasaki Ninja 650) on lap 3. From that point on, Varnes continually stretched out his advantage before easing off and coasting to a 1.471-second margin of victory in what was his maiden American Flat Track triumph.

“The bike was just working,” Varnes said. “I didn’t get the best start and I ran it in the bottom and just went for it. It seemed to work out. It chugged through the bottom no problem. I ducked into second and made another pass down low and then rode my own race. I was charging the whole time and didn’t look back until the last corner. It was just awesome. Getting my first win ever… I feel like it’s long overdue, but I can’t thank all my sponsors enough.”

Earlier in the evening, Rispoli and Gauthier looked capable of defending Black Hills Harley-Davidson’s home turf with a potential 1-2 after sweeping the Semis, but both riders struggled off the line in the Main. Together, they steamrolled up the order and traded third back and forth multiple times late before pulling Addison into that battle to make it a fight for second.

Addison ultimately held on to claim the runner-up result by just 0.044 seconds over Rispoli, with Gauthier another 0.030 seconds back in fourth.

May 4, 2018 Michael Le Pard News Comments Off on Strong Start For Suzuki In Sunny Spain – Updated

Munich. The FIM Endurance World Championship (EWC) was in action at the Slovakiaring (SVK) at the weekend. The race ended with another podium finish for the BMW S 1000RR: the GERT56 by rs speedbikes secured […]