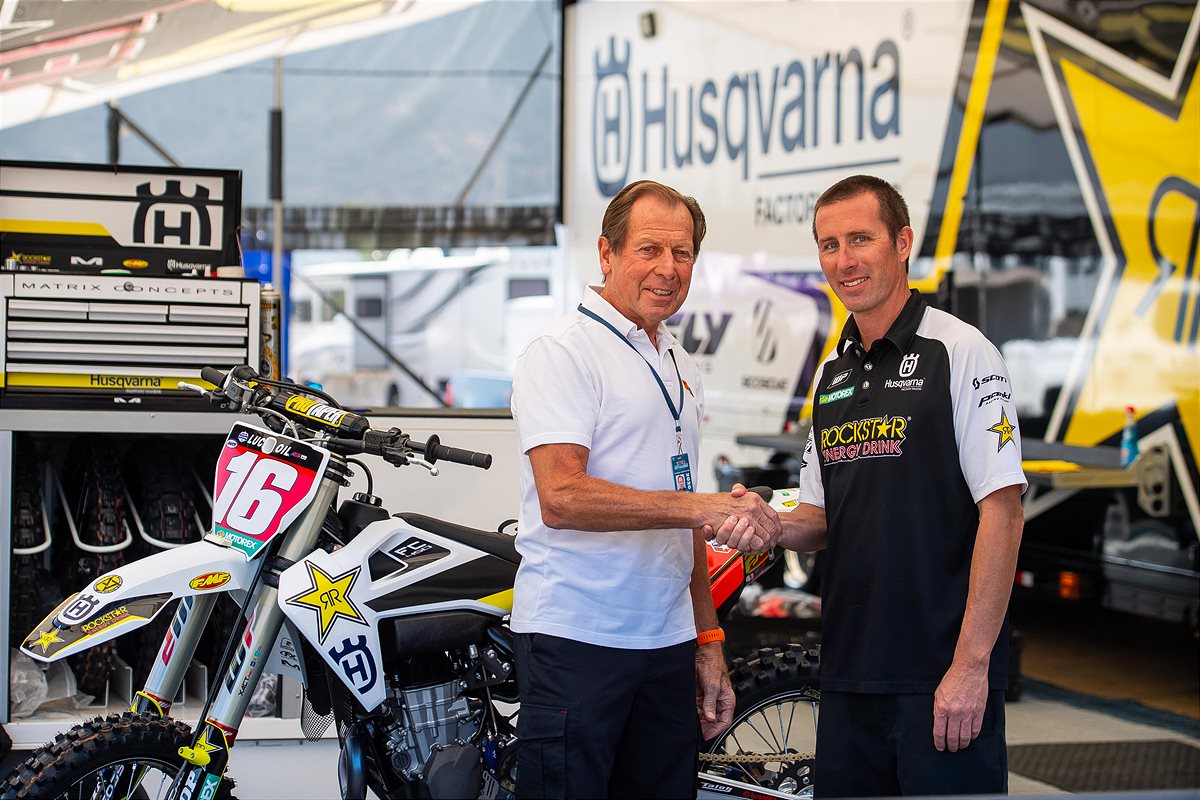 THE HIGHLY-RESPECTED CREW CHIEF ACCEPTS NEW ROLE AT AMA PRO MOTOCROSS FINALE IN SOUTHERN CALIFORNIA
The Rockstar Energy Husqvarna Factory Racing Team announced today that long-time race team technician and current Crew Chief, Stephen Westfall, has officially been named Team Manager of the SX/MX squad in the United States.
Westfall, also known as “Scuba,” began his time with the team in 2008 and spent six years as a highly-respected technician working with many of the sport’s top riders. He was promoted to Crew Chief in 2014, where he oversees all technical and logistical aspects of the team’s operations in addition to serving as an instrumental force in the team’s overall chemistry.
Roger De Coster: “We are really pleased to offer “Scuba” the opportunity to move into a management role with the Rockstar Energy Husqvarna Factory Racing Team. He has been an integral part of the team’s evolution over the years – from their early days at Suzuki, to aligning with KTM in 2014 before transitioning to Husqvarna in 2016 to become the official factory effort in the USA. Obviously 2020 has been a testing year for everyone and Scuba has done a tremendous job navigating the circumstances while demonstrating the leadership skills needed to bring the factory team into championship contention this season.”
Stephen Westfall: “I’m very excited and grateful for this opportunity. I’m looking forward to moving into the role of officially leading the team and excited to continue working with the great group of crew members and riders that I’ve had the pleasure of working alongside for many years now. It would be a great way to finish the 2020 race season with Zach [Osborne] on top.”
With Westfall officially at the helm, Zach Osborne and the Rockstar Energy Husqvarna Factory Racing Team will look to clinch their first-ever AMA Pro Motocross 450MX Championship on Saturday in Pala, California for the final round of racing in 2020. For more information on Husqvarna Motorcycles and its athletes, visit www.husqvarna-motorcycles.com.
About Michael Le Pard 4940 Articles
"Mr. Totalmotorcycle". Owner and Founder of Total Motorcycle. Supporting over Motorcyclists and Motorcycling for 21 great years. Total Motorcycle is my pride and joy and being able to reach out 330 million people has been incredible but I could not have done it without the support of my visitors, readers and members, thank you so much! You are making a difference to millions of riders worldwide. Thank you.
Website Facebook Instagram Twitter YouTube LinkedIn

When Tony Cairoli crossed the finish line at the Dutch Grand Prix earlier this month he completed the set for the KTM 450 SX-F: AMA Supercross, Motocross and now the MXGP title. We asked one […]

Loïc Larrieu Climbs To Second In The Enduro 2 World Championship

Securing a strong runner-up class result at the GP of Trentino, Outsiders Yamaha Official Enduro Team rider Loïc Larrieu has moved up to second in the provisional Enduro 2 World Championship standings. Putting together a […]