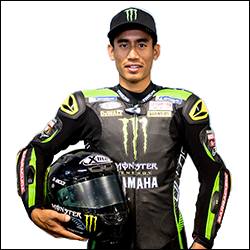 For the first time ever, the MotoGP World Championship went to the Chang International Circuit this week, where Monster Yamaha Tech3’s Johann Zarco immediately found a fast way around the 4.554km long track and Hafizh Syahrin got his first taste of the Yamaha YZR-M1.

Following a first inspection on Thursday, Zarco was rapidly amongst the fastest riders at the new venue. The French star concluded the first hot day in Buriram merely half a second behind the fastest rider, in 12th position. Meanwhile, Syahrin had the hard mission to adapt to the MotoGP machine and the new circuit at the same time, but mastered his task impressively and completed his debut with a best lap time of 1’33.165 minutes. “I’m really happy about the new track. The layout is nice and better than I expected. The position doesn’t look perfect in the end, but it’s only five tenths from the top guys. The gap between all of us where incredibly tight. I didn’t give my all to do in a fast lap time, because I know I have five days to do that. With a used tyre on the last outing I had a good feeling and we already found a comfortable base. We worked truly well today and I know that I can still improve.”

“Today was my first day in MotoGP and we did an amazing job together with the team. I feel really good, with the bike, with my guys, who they work. I have an absolutely positive first impression. Which each time, we went out on track, we were able to improve the lap time, which is very important to me. I try to keep going like this, gaining more confidence with the bike. Today we did many laps and some start practices. Thereby, it was interesting to find out how the launch control and the traction control works, but for sure I still need more confidence with it.”