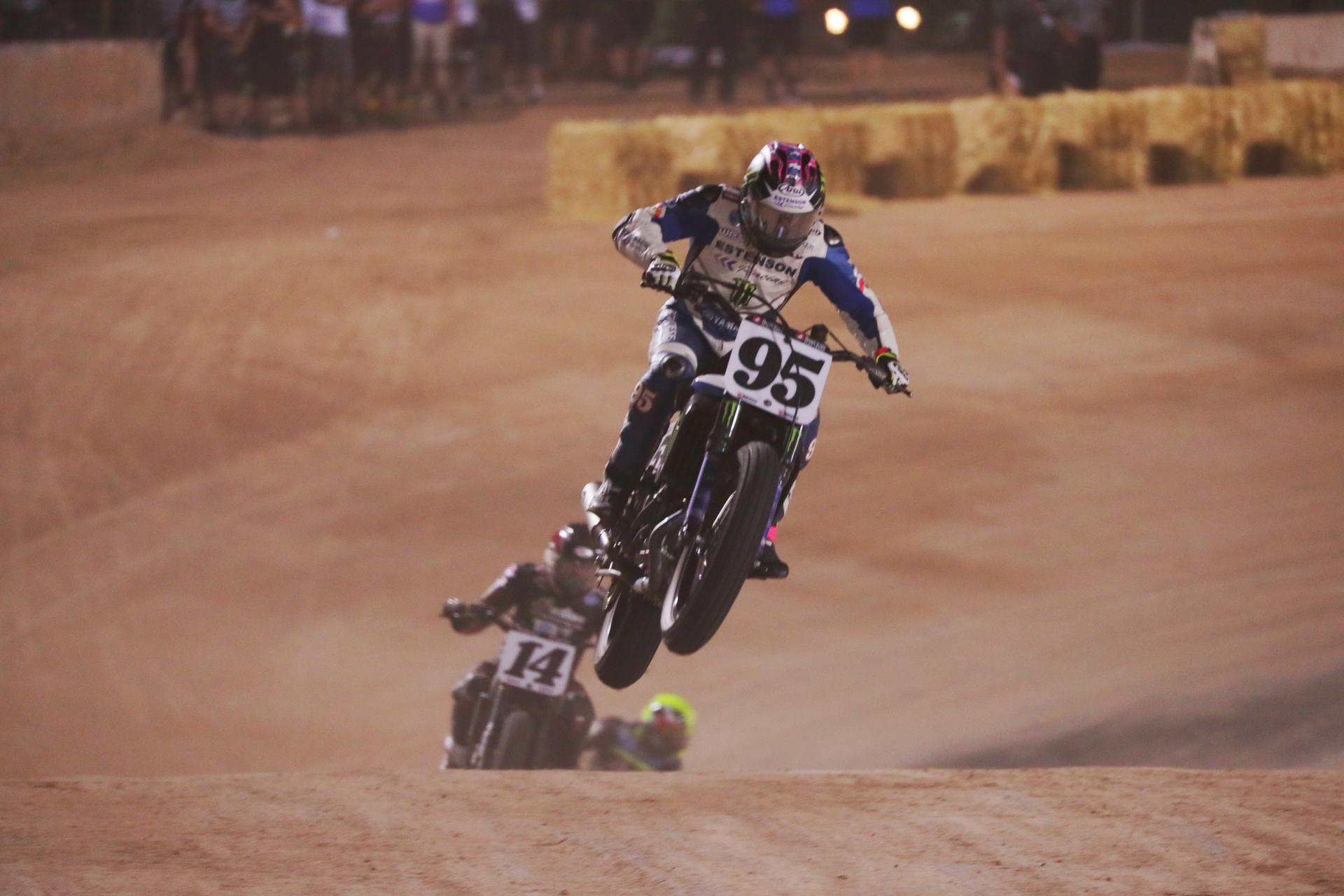 AFT Twins presented by Vance & Hines title leader Briar Bauman (No. 14 Indian Motorcycle/Progressive Insurance FTR750) appeared well on his way to a seemingly effortless victory deep into the 25-lap Main Event. Bauman was firmly in control — not just in the Main Event, but all day long. He railed around the flowing Super TT circuit, through right- and left-hand corners, and up and down the many elevation changes.

However, Beach simply would not be denied. The determined Beach refused to concede the race despite Bauman’s daunting advantage and finally started making headway after half-distance. He slowly reeled his quarry in and finally positioned himself to attack with just two laps remaining.

The multi-time national roadracing champion made his move up the inside entering Turn 2 and pulled clear from there to at last complete the long-awaited breakthrough achievement.

Making the win even sweeter was the fact that it took place in Estenson Racing’s backyard and represented the first premier class AFT win for a Yamaha twin since Scott Pearson won the Peoria TT in 1981.

After the race, Beach said, “It’s amazing. This is something I’ve wanted to do since I was a kid. We’ve been close before but never quite got it. To ride the race that I did — to be back from Briar like that and catch him and pass him with two to go — was awesome.

“I’ve just got to thank the whole team. We’ve definitely had our highs and lows this year so far. They’ve worked so hard. It’s a great feeling, but we’ve still got a lot of rounds to go and a lot of work to do. We’ll have some fun tonight and get back to work tomorrow.”

Runner-up Bauman admitted, “I had nothing for him. He came by me like I was tied to a tree… The bike was great all night. I thought I was in a pretty good position. I got the start and did everything right. The only problem is JD Beach came, so here were are in second.”

Bauman could take solace in the fact that he continued his perfect podium record on the season and extended his title lead to 18 points after four rounds.

Janisch added Saturday’s win to his season-opening triumph in the DAYTONA TT and last year’s dominant run at the Peoria TT to further his reputation as the category’s preeminent rider in the discipline.

The win did not come easily, however. Janisch found himself under heavy pressure throughout the Main Event courtesy of points leader Dalton Gauthier (No. 122 D&D Cycles/Gobert Smash Husqvarna FC450).

Gauthier threw everything he had into one final strike at the checkered flag, pulling alongside Janisch as the two exited the race’s last corner and powered up the decisive jump. Despite Gauthier’s Herculean last-ditch effort, Janisch held on by a scant 0.105 seconds at the line.

“This race was so much about the start,” Janisch said. “These guys were flying all day… I just tried running clean laps. Roof Systems Dallas TX got me off to a great start, and I was trying to watch the monitor and I saw Dalton right on me. But they kept going to a different battle, and I wanted to see where Dalton was at! He was really coming on that last lap.”

2016 AFT Singles champion Ryan Wells (No. 94 Estenson Racing Yamaha YZ450F) took full advantage of Estenson Racing’s home-track advantage to execute an inspired mid-race push. He somehow managed to track down Janisch and Gauthier and transform the Main into a three-way fight for the win — at least for a time.

While Wells’ challenge ultimately faded down the stretch, he still came up big to score a hugely encouraging third — his first podium of the season after opening 2019 without a top-ten finish in the year’s first three events.

Mikey Rush (No. 15 RMR Honda/Red Riders Rewards Honda CRF450R) backed up his Texas Half-Mile runner-up with a fourth-place run in Arizona. He had to fend off a charging Dan Bromley (No. 1 Red Bull KTM Factory Racing 450 SX-F) to do so after the defending class champ carved his way up from outside the top ten to round out the top five.

Catch the feature broadcast of the Law Tigers Arizona Super TT presented by RideNow Powersports on NBCSN with flag-to-flag coverage of both Main Events, enhanced by exclusive features and cutting-edge aerial drone and onboard footage. It will debut on Sunday, May 12, at 3:00 p.m. ET/12:00 p.m. PT and will re-air the following day, Monday, May 13, at 12:00 p.m. ET/9:00 a.m. PT.

Round 5 of the 2019 American Flat Track season will take place in two weeks with the So-Cal Half-Mile presented by Russ Brown Motorcycle Attorneys at the Southern California Fairgrounds in Perris, Calif., on Saturday, May 11.

Milan, 18 December 2019 – In New Delhi today, the Piaggio Group (PIA.MI) presented the new Ape E-City, the full-electric version of its iconic three-wheeler, which marks the Group’s entry on to the Indian electric […]

July 15, 2019 Michael Le Pard News Comments Off on Next podium with the new BMW S 1000 RR for the BMW Motorrad WorldSBK Team