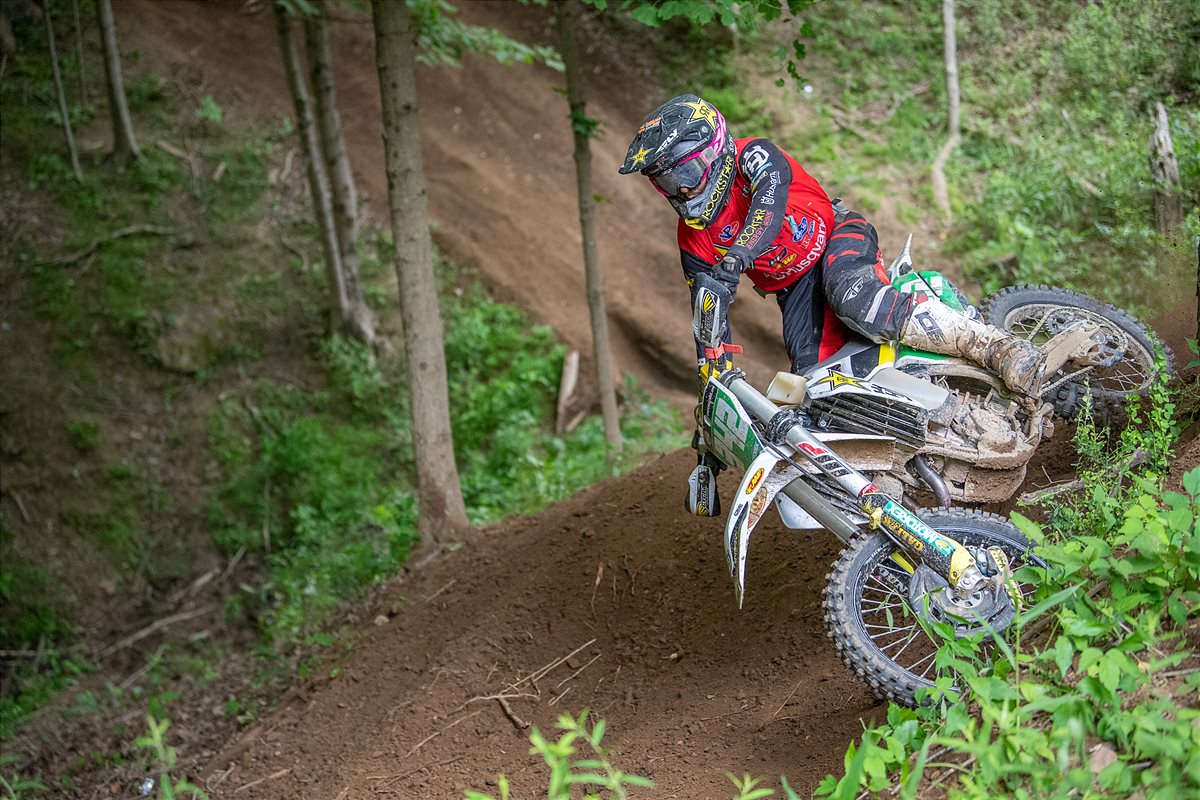 Rockstar Energy Husqvarna Factory Racing Team’s Craig DeLong fought his way to a runner-up finish in the XC2 250 Pro class on Sunday at Round 6 of the 2020 Grand National Cross Country (GNCC) Series in Mt. Morris, Pennsylvania.
DeLong got off to a mid-pack start aboard his FC 250 and he worked his way up to fourth by the second lap. He raced just outside the podium battle for the first hour and a half before putting on a charge to reach the third-place spot by lap five. From there, DeLong worked hard in the final three laps to continue cutting down the gap to second-place and on the final lap he made the pass to ultimately secure second on the day.
“I had to play some catchup today, I got a little too far back in the beginning of the race and I lost some time in the pits,” DeLong said. “I put in a good charge with two laps to go and I’m happy with it. I got some good points and now I need to work on some stuff to get the charge a little sooner in the race so I’m not coming from the back.”
Husqvarna Motorcycles-supported, Rockstar Energy athlete, Tayla Jones, earned her first victory of the season in the WXC class where she currently sits second overall in the championship standings.
Next Event: TBA – June 28, 2020
High Point GNCC Results
XC2 250 Pro Class Results
1. Mike Witkowski (YAM)
2. Craig DeLong – Rockstar Energy Factory Racing Team
3. Jonathan Girroir (KTM)
XC2 250 Pro Championship Standings
1. Mike Witkowski, 152 points
2. Craig DeLong – Rockstar Energy Factory Racing Team, 148
3. Jonathan Girroir, 143
About Michael Le Pard 4471 Articles
"Mr. Totalmotorcycle". Owner and Founder of Total Motorcycle. Supporting over Motorcyclists and Motorcycling for 21 great years. Total Motorcycle is my pride and joy and being able to reach out 330 million people has been incredible but I could not have done it without the support of my visitors, readers and members, thank you so much! You are making a difference to millions of riders worldwide. Thank you.
Website Facebook Instagram Twitter YouTube LinkedIn

After its long-awaited return, the Pata Yamaha WorldSBK Official Team with Rizla heads directly to Autódromo Internacional do Algarve for the third round in the restarted FIM Superbike World Championship, held back-to-back following round two […]

The new 2020 Harley-Davidson Softail Standard – The Bargain Big Boy Bike is raw, minimalistic and best of all comes with the Milwaukee-Eight 107 V-Twin engine! How much? The new Softail Standard is $13599 USD/$15699 […]