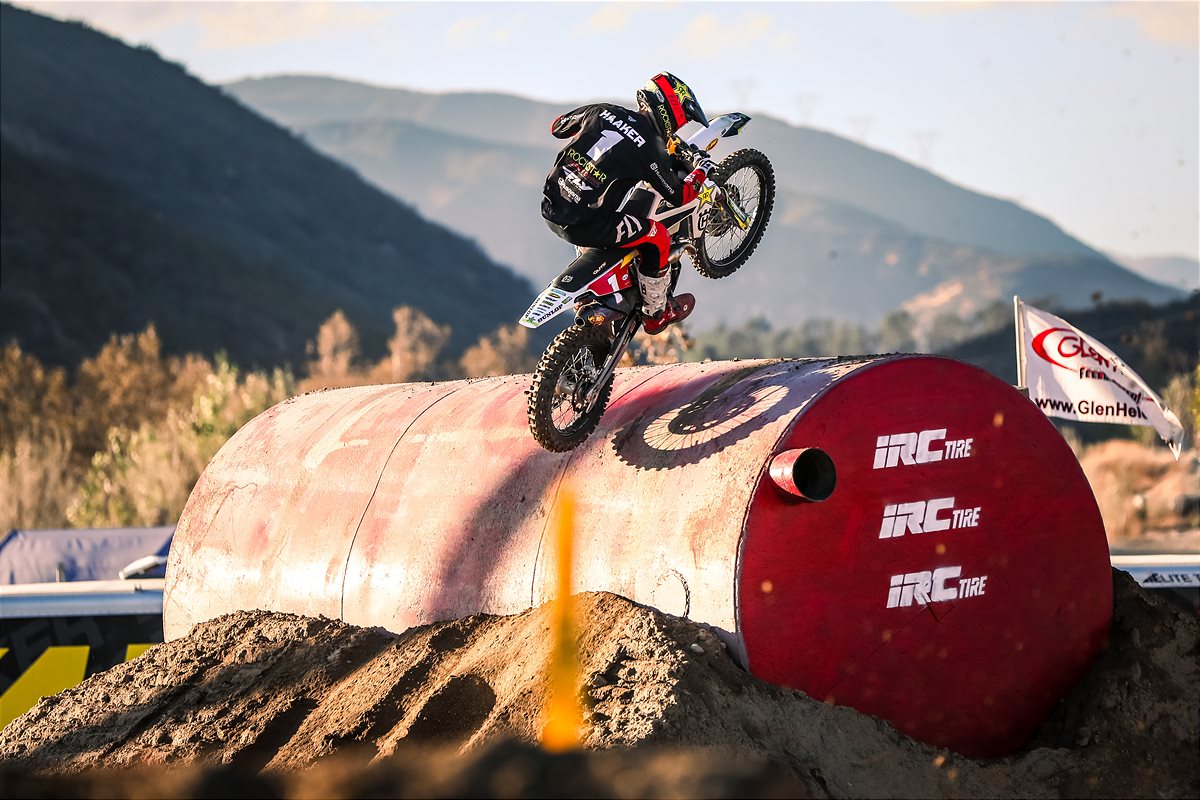 With only two days off since the last double-header, the 2020 AMA EnduroCross Championship jumped right back into racing on Monday for the penultimate round of the six-race series at Glen Helen Raceway. Rockstar Energy Husqvarna Factory Racing’s Colton Haaker emerged with two significant race-wins and a second overall on the night despite a less-than-favorable sixth-place finish in Moto 2. The three-time AMA EnduroCross Champion carries a 10-point lead into tomorrow’s series finale as he looks to put a stamp on the season with title number four.
Haaker started the day off on a positive note as he claimed the fastest hot lap to carry pole position into the first moto. With that, he got off to a solid second-place start and set himself up to make a pass through the K Rail section as he overtook the lead on lap three. The series points leader put together a string of solid laps to extend his lead to almost 11 seconds by lap seven. On the final lap, Haaker made a mistake and went down in the log section, bringing his lead down to only 3.4 seconds but he was able to maintain his position out front to secure the race-win.
In race two, Haaker powered his way through the inverted start to secure a mid-pack position early on. He had a great line through the rocks that moved him into third on the opening lap and he was on his way to passing for second until he dropped his front wheel on the back side of a steep jump and launched over the bars. He was able to re-mount quickly but he lost additional time having to maneuver his front brake that was wedged from the crash and keeping him from being able to move. He eventually figured it out and put his head down to charge from 12th up to sixth before running out of time in the seven-lap race.
In race three, Haaker grabbed the holeshot and early lead but he made a mistake in the rocks on lap one, which allowed Cody Webb to get past. Haaker followed Webb for three laps before powering his way back into the lead in the rock section. Haaker finished strong to secure another race-win in Moto 3 and he was able to score second overall to maintain his lead in the overall championship.
“When you win two of the three races on the night, it’s a little frustrating but that’s kind of how the season has been for me,” Haaker said. “There’s not too much I can complain about, though. Perfectionist champions beat themselves up and that’s just the way it is. I’m not super bummed but I’m not overly happy with myself.”
The 2020 AMA EnduroCross Series is set to conclude tomorrow, November 3, at Glen Helen Raceway.
Super Pro Class Results – Round 5
1. Cody Webb, 3-1-2, Sherco
2. Colton Haaker, 1-6-1, Rockstar Energy Husqvarna Factory Racing
3. Trystan Hart, 2-3-4, KTM
…
6. Noah Kepple, 5-5-8, Husqvarna
Super Pro Class Championship Standings
1. Colton Haaker, 119 points
2. Cody Webb, 109 points
3. Trystan Hart, 105 points
…
6. Noah Kepple, 72 points
About Michael Le Pard 5053 Articles
"Mr. Totalmotorcycle". Owner and Founder of Total Motorcycle. Supporting over Motorcyclists and Motorcycling for 21 great years. Total Motorcycle is my pride and joy and being able to reach out 330 million people has been incredible but I could not have done it without the support of my visitors, readers and members, thank you so much! You are making a difference to millions of riders worldwide. Thank you.
Website Facebook Instagram Twitter YouTube LinkedIn

Yamaha has been appointed as one of the new official suppliers of La Vuelta, Spain’s largest cycling event Since its first edition in 1935, La Vuelta has become the top race in Spain’s national cycling […]

October 11, 2020 Michael Le Pard News Comments Off on Ducati happy to be back on the front row at Le Mans MotoGP