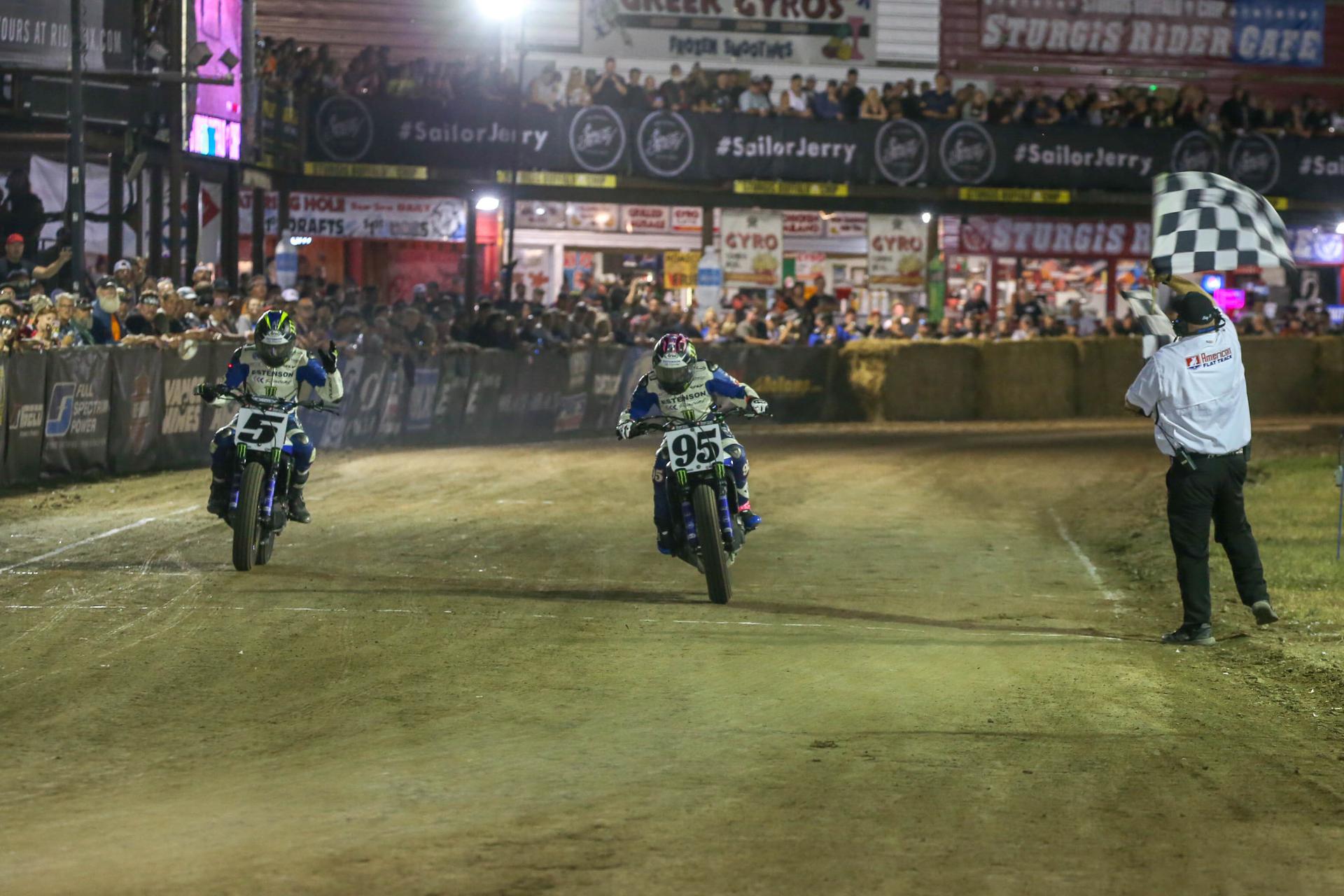 Passing opportunities proved few and far between as the riders negotiated the purpose-built TT circuit on the Sturgis Buffalo Chip Campground that encircled “The Bar” and was pressed tight by thousands of fans on the fences. As a result, the top five could have easily been set from the opening lap if not for repeated drama.

First, Vanderkooi ran wide and quickly gave up three positions. An aggressive Beach then made his way by Bauman as well and immediately went about applying intense pressure on Mees for second.

That pressure was so great, in fact, that Mees ultimately decided it was better to just hand the position over to Beach than invite trouble in an attempt to defend it, especially once he saw that championship rival Briar Bauman (No. 14 Indian Motorcycle/Progressive Insurance FTR750) was destined to DNF after crashing further back in the field.

At that point, Mees’ calculated decision appeared likely only to open the door for an eventual Estenson 1-2, but Beach still wasn’t satisfied. He somehow reeled in teammate Johnson, arriving on his rear wheel just in time to take the white flag. However, Beach simply couldn’t find a way through and was all but ready to follow Johnson to the checkered flag when Johnson’s bike suffered a mechanical issue exiting the race’s very final corner.

Beach promptly powered past, officially claiming the victory by 0.201 seconds. The win was the second of Beach’s AFT Twins career and his second straight on the tour’s run of TTs, having also won at the Arizona Super TT earlier this season.

As excited as he was, Beach couldn’t help but feel for Johnson. He said, “I’m heartbroken for Jake. He rode an amazing race. I came from like fifth and caught him, but we only had a lap to go. I was trying to find a way by him but there just wasn’t any room. Coming out of the last turn, I heard his bike blubber, so I knew I was hooked up and going. It’s awesome to get a win, but to get a win like that — especially with Jake because he’s such a good guy — it feels good but it doesn’t.

“I have to thank the whole crowd for coming out. This event is awesome. And I’ve got to thank the whole Estenson racing team. They’ve been working really hard. We’ve got a bike that can go right, and I think we’ve proved it. And we have another chance at the Peoria TT, so we’ll see what happens.”

For the second consecutive year, Ryan Sipes (No. 264 Red Bull/Leatt/KTM 450 SX-F) put on a masterclass of all-around riding ability at the Buffalo Chip TT with a convincing victory in the once-stopped and restarted Roof Systems AFT Singles presented by Russ Brown Motorcycle Attorneys Main Event.

With right- and left-handers of varying radii and jumps to navigate, the TTs demand a somewhat different, expanded skillset compared to the other three AFT disciplines. It should be no surprise that the supremely versatile Sipes once again shone under the lights at the Buffalo Chip, as he showcased the talents that also made him a Supercross race winner and America’s first-ever ISDE overall winner.

Sipes was in dominant form all day long, and effectively secured the win at the critically important start when he hammered into the lead off the line. His combination of superior speed and inch-perfect lines provided his opponents with precious little hope of defeating the Kentucky native on this night.

“I wanted this one really bad,” Sipes said. “All I’ve thought about since I crashed at Springfield was I should have won there, and now I have to win here. And I did it, so I feel really good about it.”

Defending champ Dan Bromley (No. 1 Red Bull KTM Factory Racing 450 SX-F) took over second in the championship chase with his sixth podium result of the season by finishing third.

‘16 class champ Ryan Wells (No. 94 Estenson Racing Yamaha YZ450F) made an impressive charge on a track that was nearly impossible to pass on to arrive in fourth while top qualifier Chad Cose (No. 49 Parkinson Bros Racing/Rod Lake Honda CRF450R) rounded out the top five.

Be sure to catch the feature broadcast of the Buffalo Chip TT presented by Indian Motorcycle with flag-to-flag coverage of both Main Events, enhanced by exclusive features and cutting-edge aerial drone and onboard footage. The broadcast will debut on Saturday, August 10, at 1:00 p.m. ET/10:00 a.m. PT and re-air on Wednesday, August 14, starting at 3:00 p.m. ET/12:00 p.m. PT.

DAYTONA BEACH, Fla. (March 28, 2019) – In the weeks leading up to the highly-anticipated third round of its 2019 season, American Flat Track announced today that Al Lamb’s Dallas Honda will be the Entitlement Sponsor […]