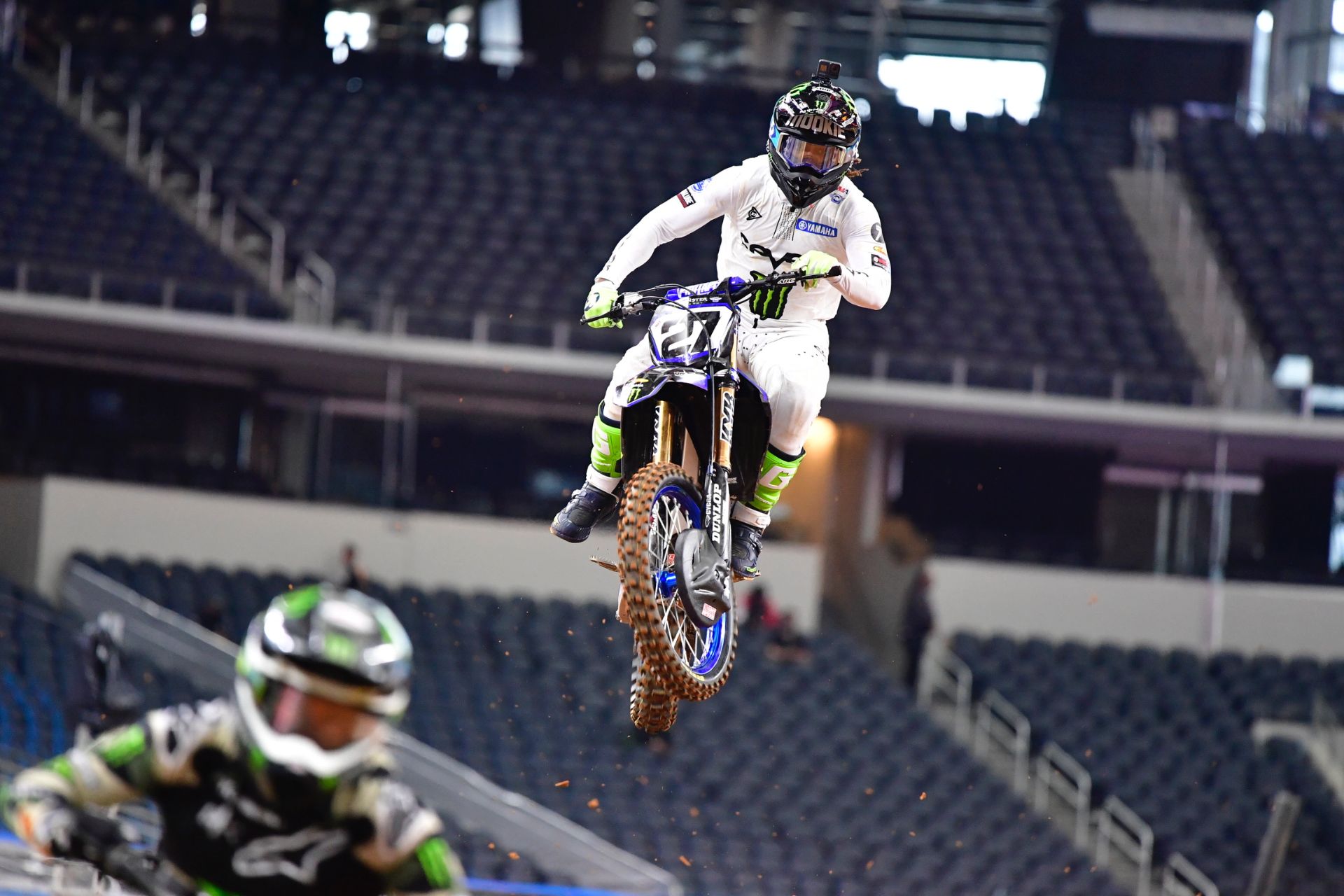 Monster Energy Star Yamaha Racing’s Aaron Plessinger brought home another solid result with a fifth-place finish inside the AT&T Stadium at Round 10 of the Monster Energy AMA Supercross in Arlington, Texas last night. Malcolm Stewart had a good run but went down, coming back to 14th. Dylan Ferrandis went down early in the race and was unable to continue, scoring 22nd on the night.

Plessinger was riding the momentum of his first podium of the season into Arlington 1, starting the night off with his first 450 heat race win. With a good gate pick, he tried his best to grab the start to give him another podium but found himself in 10th at the start of the second lap. He steadily made his way through the packed field and came across the finish line with a hard-fought fifth-place to move into the top five in the championship.

Stewart has been running well as of late, and it showed in the Lone Star state. He started the Main Event inside the top-10 and was moving his way forward when he made a mistake that sent him off the track four laps into the race. He remounted in 22nd, and was able to fight his way back to 14th, the effort tying him at 152 points with his teammate Plessinger.

It was a great start to the night for Ferrandis, who shot out of the gate and found himself running in second for the Round 10 main event. The Rookie rode strong as the laps clicked off, but a few laps after Stewart, he found himself on the wrong side of a pass and went hard to the ground. He got up but he hit his leg pretty hard and was unable to finish the race.

The Monster Energy Star Yamaha Racing 450 team returns to action at AT&T Stadium in Arlington, Texas, on Tuesday, March 16, for the second round of the Monster Energy AMA Supercross tripleheader.

“The results aren’t going to show what actually could have been. The track was pretty easy, so there wasn’t much to separate the guys. The one spot that could separate them was the whoops, and thankfully all three of our guys were great there. Unfortunately, Dylan had a get together with another rider and went down. We think he’s okay and ready to go for Tuesday. On a positive note, Dylan finally got a great start – two, actually. Malcolm had a little brain fade and went down as well, but thankfully he’s ok and ready to go. Aaron had a good race. Like I said, it was hard to pass out there, but he was making it happen. He spent a little too much time behind (Dean) Wilson but once he got going we were good. We’re going to do some more homework and come back Tuesday.”

“I’m stoked about how the heat race went with the win. Then we went into the main, and there weren’t too many great gates, so I just tried to pick the one that I felt would be best. I got a mid-pack start and just charged. I tried to ride my own race, and I started to click off people one by one, but the track was tricky; it was rough and started to dry out. You had to be patient in the berms otherwise it was easy to go down. We’ve been clicking off the check marks the past few weeks, and I’m ready to get back out here Tuesday and do some work.”

“All day was great. The Main Event was going good but (Jason) Anderson just got into me. It wasn’t a big deal. I was just going to square him up, but when I went to square him up, my tire hooked up, and I went straight into the guy. That wasn’t my intention at all. It wasn’t the night we were looking for, but I’m just glad I didn’t get hurt when I hit the concrete because I went flying. It’s nice having these three races because we can quickly regroup and come back out for more.”

“The day started off well, I had a good start in both my heat and Main Event. Unfortunately, I got kicked out by another rider which made me crash. I hit my leg pretty hard and it was too painful to finish the race.”

August 9, 2018 Michael Le Pard News Comments Off on IN THE GREEN AND ROLLING AUSTRIAN HILLS FOR THE GP OF ÖSTERREICH

Team Suzuki Press Office – August 8. Only a few hours after the end of the official test held in Brno on Monday, Team SUZUKI ECSTAR and its riders are already settled in Spielberg (Austria) […]