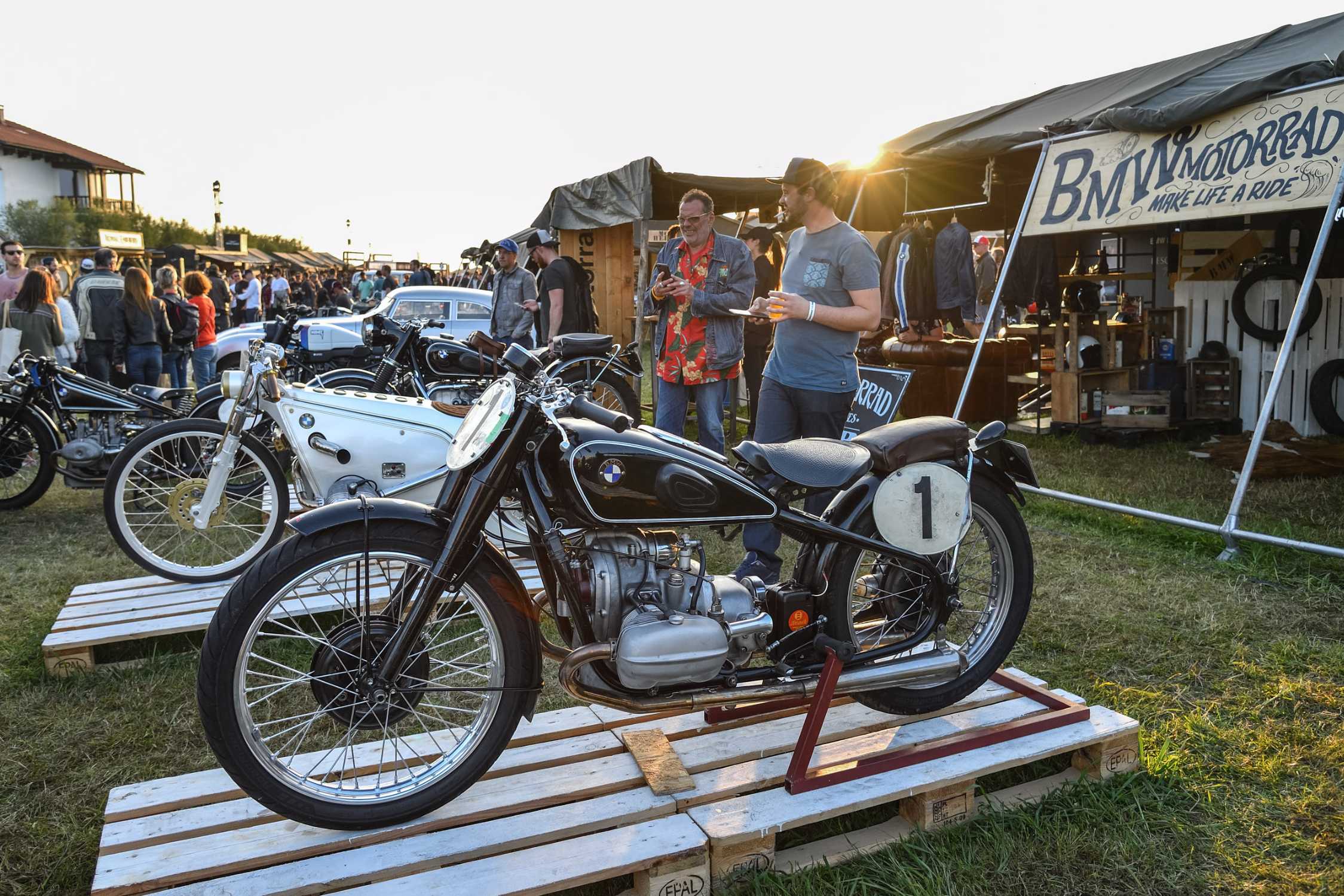 Munich/Goodwood. The man in the suit looked surreptitiously around all the classic cars, then he slowly opened the left-hand side of his jacket – lots of pocket watches were dangling inside his jacket. “Special price, special price”, he murmured to the astonished onlookers. . . Scenes like this are typical for the Goodwood Revival Meeting: It’s a spectacle from start to finish.

Every guest is part of the drama at the annual rendezvous around theGoodwood Circuit and on the race track located in southern England.Genuine performers, professional racing drivers and innumerablemechanics revive an era of motor sport that has long since passed intothe annals of history. This year once again, more than 150 000visitors took a trip down memory lane and enjoyed some 360 automobilesand 30 motorcycles on the race track, along with the numerous heritagetreasures waiting to be admired.

Classic motorcycles from BMW Motorrad were put through their paces onthe race track and demonstrated that they should certainly not beconsigned to the scrap heap. Australian racing legend Troy Corserachieved some impressive records and a historic triumph. On the BMW R57 Kompressor, he and Herbert Schwab won the overall placings as theycompeted for the traditional Barry Sheene Memorial Trophy. Already inthe first race on the Saturday, the duo crossed the finishing line inthird place after a false start and a subsequent spectacular pursuit.In the second race on the Sunday, Corser and Schwab even succeeded inpassing the chequered flag as winners. This enabled them to come outon top in the overall placings when the two results were put together.This was the first overall win for BMW Group Classic at the Goodwood Revival.

The sensational performance of the BMW R 57 Kompressor wascomplemented with a further tour de force by Corser. The two-timesSuperbike World Champion rode the fastest lap of the entire weekendand simultaneously achieved the best lap time ever ridden on theGoodwood Circuit with a classic motorcycle. The other teams also madetheir contribution to the exceptionally successful appearance by BMWMotorrad Classic in Goodwood. Maria Costello and Claus Clausen ridingthe second BMW R 57 Kompressor came tenth when they competed in therace on the Sunday. In the same race, Klaus Ottillinger and SebastianGutsch rode their BMW R 5 to fourth place.

The races for the Barry Sheene Memorial Trophy recall the “BMCRC1000cc Scratch Race” in which grand prix bikes, slightly modified roadmotorcycles and specials battled for victory on “Motor Cycling Goodwood Saturday” in 1951. At the Goodwood Revival in 2018, historicautomobiles also competed in a trial of strength emulating an oldtradition. The entrants included an Austin Mini Cooper S Competitionand a BMW 1800 TI/SA. They even took part in the same race for the “St. Marys Trophy”, named after the bend with the most action on the3.8 kilometre Goodwood circuit. They were competing with lots of otherclassic Minis, a veritable horde of Ford Lotus Cortinas, Alfa Romeo 1600 GTA coupés and Jaguar Mark II saloons. The drivers lived up totheir reputation and delighted the public gallery. The races are notshow acts – nobody wants to be overtaken here even if there is onlyfame and honour to be gained.

The classic Mini heralded the entry into motor sport for a host ofdrivers who subsequently became successful professionals – names likeLauda, Hunt and Stewart are associated with the car. There again the “Rally Professor” Rauno Aaltonen – who subsequently went on to becomehead of BMW driver training – achieved his biggest successes in thediminutive British car. The BMW 1800 TI/SA is one of those cars thatallowed the make to prove its potential in touring-car racing duringthe 1960s. The1.8 litre four-cylinder engine powering the saloon inthe road-going version generated 110 hp, while two twin carburettorsand higher compression in the motor-sport guise of the “Special” –“Sonderausführung – (SA) increased the power to 130 hp to allow a topspeed of up to 190 km/h.

Alongside the racing events on the Goodwood Circuit, BMW GroupClassic fascinated the public with the acclaimed BMW 507 once owned by Elvis Presley, a rare BMW 503 convertible and an open-top Rolls-Royce Silver Cloud. The vehicles were presented entirely in the style of the1950s and 1960s. A replica of the traditional London motor-car dealerKevill-Davies & March was set up not far from the race track.

DETROIT (Jan. 14, 2019) – Sports car enthusiasts have been waiting more than 20 years for the return of Supra and will soon be able to purchase the 2020 Toyota GR Supra for a Manufacturer’s Suggested […]

Febvre Fights to Top-Five Finish at the French Grand Prix