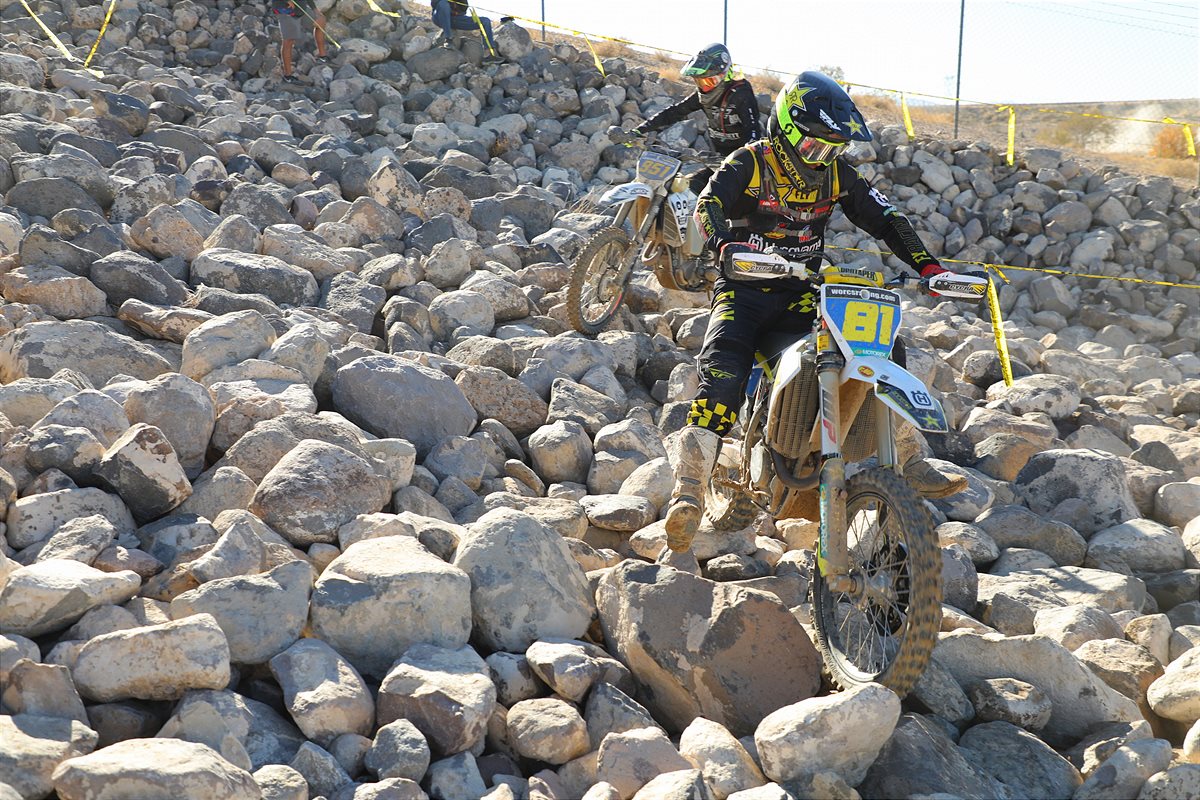 Rockstar Energy Husqvarna Factory Racing’s Giacomo Redondi battled down to the wire on Sunday to secure a top-five finish at Round 8 of the 2020 World Off-Road Championship Series (WORCS) in Primm, Nevada.
He got off to a fourth-place start in the Pro (MC) division and he immediately engaged in a battle just outside of podium contention early on. He spent the entire 12-lap race battling Cole Martinez for the fourth-place position and he was able to make a pass stick with three laps to go and he put on a charge to create a gap over Martinez in fifth. However, on the final lap Redondi made a mistake and Martinez was able to close the gap and they battled closely through the final pass of the rock pile. Both riders ended up going down but Redondi was the last to get back and going, leaving him to settle for fifth on the day.
Redondi: “Martinez passed me after the start and we were fighting all moto. With three laps to go, I passed him. On the last lap, I take a lapper during the rocks and Martinez was getting really close to me. On the second part of the rocks, we both crashed but he was on the inside and he started first so he took fourth place and I finished top-five. I’m really happy with the progress and I’m looking forward to the next round and hopefully getting on the podium.”
Rockstar Energy Husqvarna Factory Racing’s Austin Walton will miss the remainder of the series due to an injury sustained two weeks ago at the NGPC Series. He currently sits fourth overall in the championship standings following a break-through victory at the previous round.
Next Race: (Round 9) Lake Havasu, Arizona – December 4-6, 2020
Pro (MC) Results – Round 8
1. Dante Oliveira (KTM)
2. Taylor Robert (KTM)
3. Zach Bell (KAW)
…
9. Giacomo Redondi – Rockstar Energy Husqvarna Factory Racing
Pro (MC) Championship Standings
1. Taylor Robert, 191 points
2. Dante Oliveira, 167 points
3. Cole Martinez, 135
4. Austin Walton, 131 points
…
10. Giacomo Redondi, 61 points
About Michael Le Pard 5052 Articles
"Mr. Totalmotorcycle". Owner and Founder of Total Motorcycle. Supporting over Motorcyclists and Motorcycling for 21 great years. Total Motorcycle is my pride and joy and being able to reach out 330 million people has been incredible but I could not have done it without the support of my visitors, readers and members, thank you so much! You are making a difference to millions of riders worldwide. Thank you.
Website Facebook Instagram Twitter YouTube LinkedIn

The 2020 AMA Supercross World Championship Series returned to racing on Sunday with Round 11 taking place inside a fan-less Rice-Eccles Stadium in Salt Lake City, Utah. Kicking off the first of seven final rounds, […]

CAREER-BEST 4TH FOR HILL ON RM-Z450 AT WASHOUGAL

August 2, 2018 Michael Le Pard News Comments Off on CAREER-BEST 4TH FOR HILL ON RM-Z450 AT WASHOUGAL