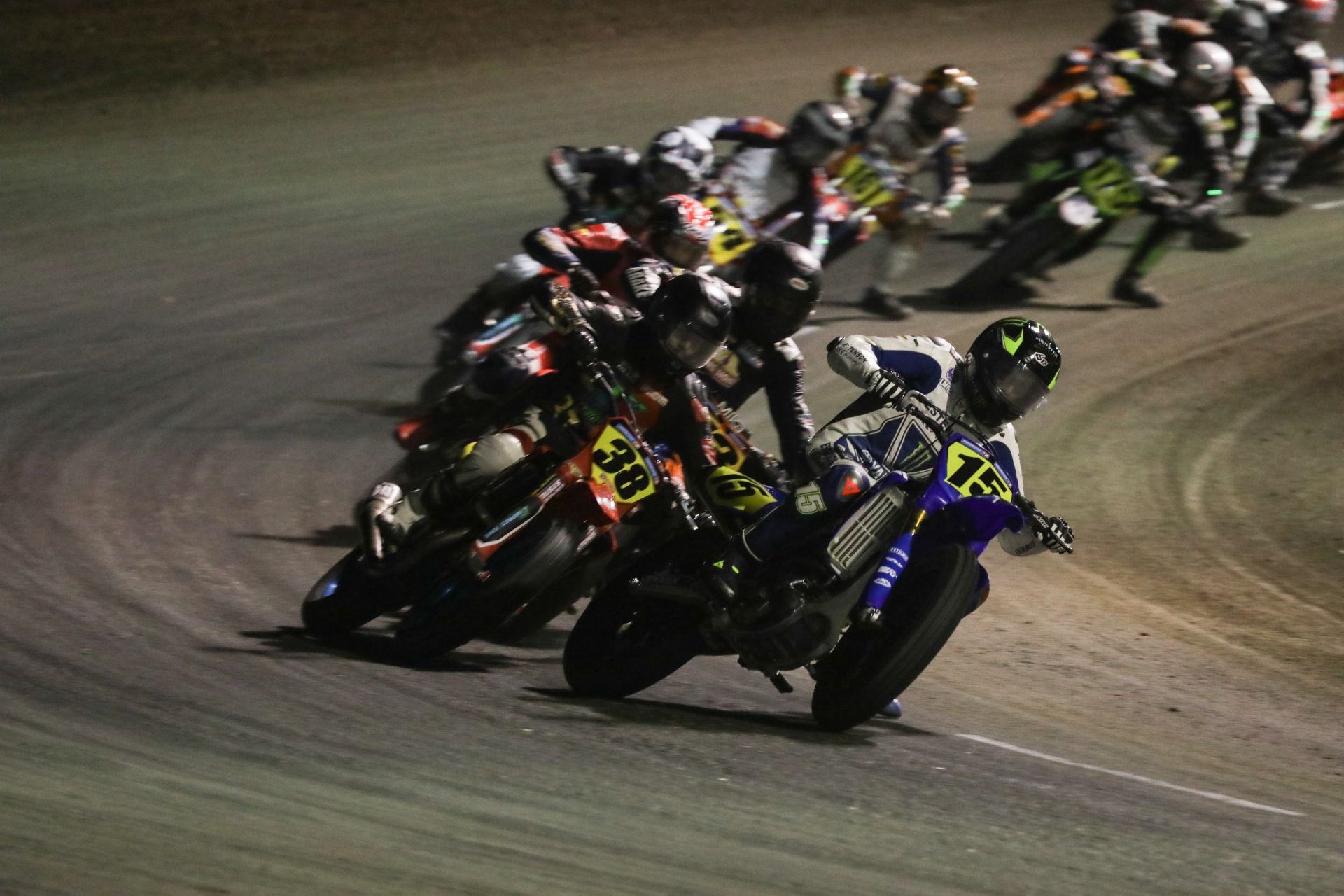 Estenson Racing Back on the Box at Volusia Half-Mile II

AFT Singles championship contenders, Rush and Daniels, once again factored heavily in the battle for the win aboard their Yamaha YZ450Fs. The two pulled off a number of daring and skillful maneuvers at the front as a six-rider pack waged an intense fight for victory.

Rush, who started from the front row after winning his Semi earlier, diced his way forward from fifth to ultimately take over the lead with just over three minutes remaining on the clock. He was momentarily dropped back to second two laps later but immediately launched a counter-attack to reclaim the position. The heated contest saw Rush finally relinquish control of the lead with just over a minute to go, ultimately accepting the checkered flag as the runner-up just 0.078 seconds off the win. Daniels claimed a hard-earned fourth a few bike lengths back, coming up just 0.277 seconds short of the podium himself.

Saturday’s slick track conditions presented challenges for the Mission SuperTwins duo, and the team continued to work on making improvements. In the Main Event, Beach managed to get one of his trademark blistering starts, slashing several positions up the order in the race’s opening stages. A minor incident saw him give back a couple of those places, and he ultimately finished a close ninth. Carlile was another spot back as he rounded out the premier class top 10.

Estenson Racing will now have several weeks to take what they learned this weekend and prepare for Yamaha’s home race, the Atlanta Super TT, on May 1, at Atlanta Motor Speedway.

“We did not make the gains today that we thought we could make in either class. In the Singles race, both riders were right there fighting for the win but were not able to make it happen. Mikey and Dallas both rode well and left the weekend in a good position in the championship.

“On the SuperTwins side, we really thought we could make some small improvements today and be as competitive as we were last night, but the track seemed to change a little all day, and we did not adapt as well as we needed to. Overall it was not a bad start to the season, and we are looking forward to the next one.”

“I’m happy to be on the podium two nights in a row at Volusia. The team worked excellent all day and really all weekend. My bike was awesome. The track was pretty challenging. The groove was glazed over and really slippery compared to last night. I’m really happy with how we started the season. I’m looking forward to having a good year and having a lot of fun with the team.”

“It was a little bit of a rough night. The day started better than yesterday, qualifying fifth, and I was able to start the Semi from the front row. I worked my way up to second and tried to pass for the lead and ran wide and finished third. So I had the first pick on the second row for the Main. I didn’t get off the line very well, and I was struggling to make some passes. I finally worked my way up to fourth and made the pass for third. I got passed back and was in a real heated battle with Morgen Mischler, Mikey, and Shayna (Texter-Bauman). About six laps to go, I tried to make a pass on Mischler, but it didn’t stick, and I lost a bit of ground. I started overriding it and ended up P4. I’m a little upset with myself, but we’re coming out of here with more points than we did last year. So we’re sitting pretty good in the championship, and it was encouraging to be up front all weekend long. I’m really looking forward to the Atlanta Super TT to show these guys what we’ve got.”

“Today’s race was tough. We really chased the track and the bike setup all day long. We just seemed to be on our back foot all day. Going into the main, we put the setup back to what we knew worked last night. When I had a clear track, we could click off some good lap times, but for some reason, the setup we had made it hard to make passes. We learned a lot tonight and still have positives to take away from it, so we’ll move forward.”

“Tonight definitely wasn’t all smiles like last night. The track was very different for us from round one to round two. We got a good setup for me to come into the corners and steer the bike off, but I didn’t have any of the rear grip I had on night one. We learned some stuff this weekend and showed that we are on the right path to success.”

PETRONAS Yamaha Sepang Racing Team had an excellent Saturday at the Italian GP, with Fabio Quartararo setting the second fastest time in Q2, for a front-row start tomorrow, whilst team-mate Franco Morbidelli claimed fourth for […]

Team Suzuki Press Office – May 26. The sixth round of the MotoGP™ World Championship will take place at the ever-popular Autodromo di Mugello in Italy, as the series returns after skipping a year at […]