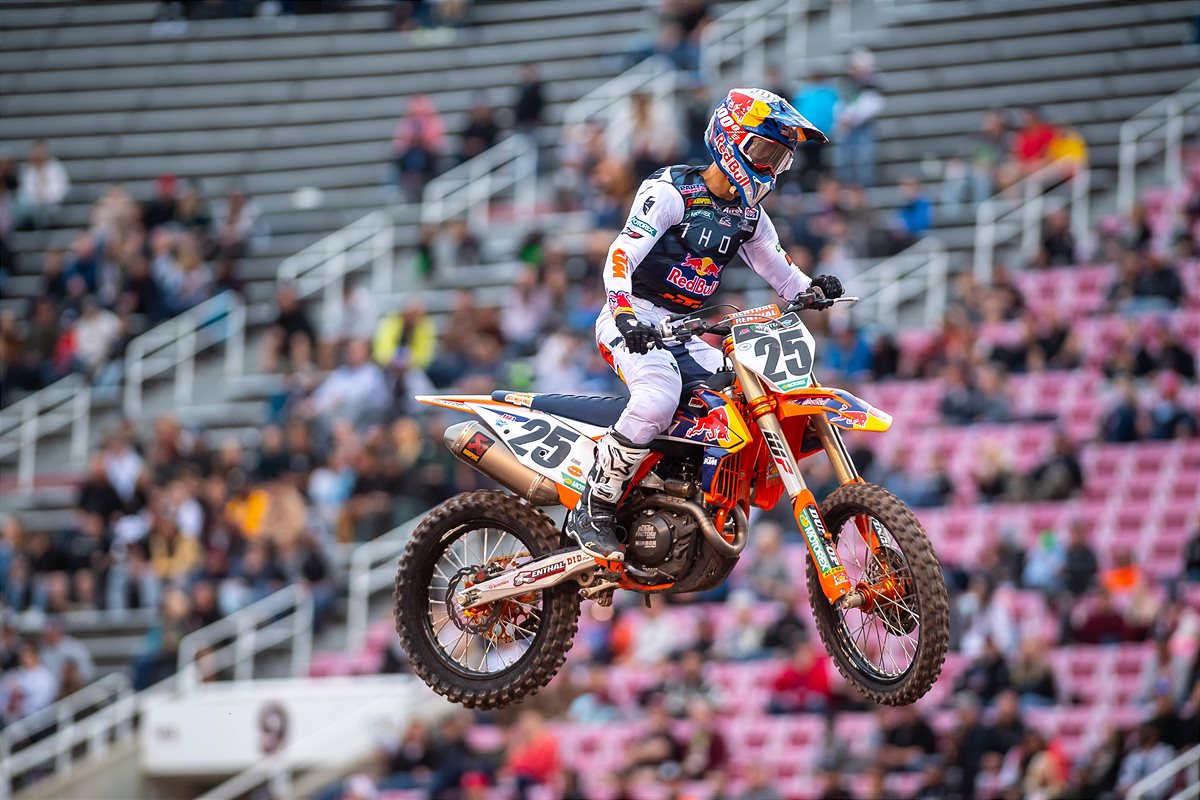 SALT LAKE CITY, Utah – Marvin Musquin led the Red Bull KTM Factory Racing Team to an impressive 1-2 podium sweep on Saturday as he edged out teammate Cooper Webb by 0.326 seconds at Round 16 of the 2021 AMA Supercross Championship in Salt Lake City, Utah. With Webb favorably at the helm of the 450SX championship chase, it was also a momentous night for Musquin, who broke through for his first Main Event victory of the season.
The Red Bull KTM duo finished the night similar to how they started, as both riders powered their KTM 450 SX-F FACTORY EDITION machines to the front in 450SX Heat 1. It was Musquin who settled into second on the opening lap, battling close behind Webb early on. He raced in second for the first four laps but a small crash dropped him back a few spots to finish fifth.
In the Main Event, Musquin shot off the line to secure a second-place start and he battled for the lead early on. Pressuring Ken Roczen for the lead spot, Musquin put himself into a favorable position to capitalize when Roczen went down just after the halfway point. Assuming the lead on lap 15, Musquin set a pace out front that would ultimately be untouchable in the final laps, as he edged out his teammate Webb at the end of 25 laps.
Musquin: “I can’t believe it right now – I’m standing on the top of the podium. I have had some struggles this season but my goal is to come back and keep getting better. There are so many good riders, so the start is super important and I was just trying to be consistent, those whoops were really tough. I’m so proud, I gave it my all tonight.”
Webb, the second-place qualifier, jumped into the lead on the opening lap of 450SX Heat 1 and he put forth a strong performance to capture a convincing heat-race victory. In the Main Event, he didn’t get the best jump off the start but he was able to position himself into fourth by the end of lap one. He patiently maneuvered his way into third and that’s when the race dynamics began to change in his favor. The leader went down later in the race, gifting Webb the second-place spot just behind his teammate Musquin. Webb continued to pressure Musquin all the way into the final moments of the race and despite a hard-fought effort, he wasn’t able to make a move before the checkers. With a solid second-place finish, Webb was able to collect valuable points to carry a 22-point lead into the series finale next weekend.
Webb: “I didn’t get a great start tonight, which hindered me a little bit. Those whoops were super tricky, I finally found a good line and made a charge there at the end. I thought I was in a good position and Marvin picked it up a lot there at the end. Getting points is key but you want to win when you’re that close. We’ll come around next Saturday and see what we can do!”
Next Race: Salt Lake City 2 (finale) – May 1, 2021
Results 450SX Class – Salt Lake City SX
1. Marvin Musquin (FRA), KTM, 25 laps
2. Cooper Webb (USA), KTM, +0.326
3. Malcolm Stewart (USA), Yamaha, +10.463
OTHER KTM
11. Joey Savatgy (USA), KTM
19. Justin Starling (USA), KTM
20. Henry Miller (USA), KTM
Standings 450SX Class 2021 after 16 of 17 rounds
1. Webb, 362 points
2. Roczen, 340
3. Tomac, 312
OTHER KTM
9. Musquin, 208
10. Savatgy, 190
13. Davalos, 124
About Michael Le Pard 5579 Articles
"Mr. Totalmotorcycle". Owner and Founder of Total Motorcycle. Supporting over Motorcyclists and Motorcycling for 21 great years. Total Motorcycle is my pride and joy and being able to reach out 330 million people has been incredible but I could not have done it without the support of my visitors, readers and members, thank you so much! You are making a difference to millions of riders worldwide. Thank you.
Website Facebook Instagram Twitter YouTube LinkedIn

Can Fashion and Safety Meet on a Motorcycle? – TMW Review

May 11, 2020 Bruce Ross News, Reviews, What’s New Comments Off on Can Fashion and Safety Meet on a Motorcycle? – TMW Review

Can Fashion and Safety Meet on a Motorcycle? We look into that question as Total Motorcycle reviews the Indigo Kevlar Motorcycle Riding Jean to evaluate quality, performance and durability, and style. The Indigo Riding Jean […]

ROCKSTAR ENERGY HUSQVARNA RIDER CLOSES IN ON PROVISIONAL RALLY LEADER WITH ONE STAGE LEFT TO RACE Rockstar Energy Husqvarna Factory Racing’s Pablo Quintanilla has stormed to victory on the penultimate stage of the Dakar Rally. […]