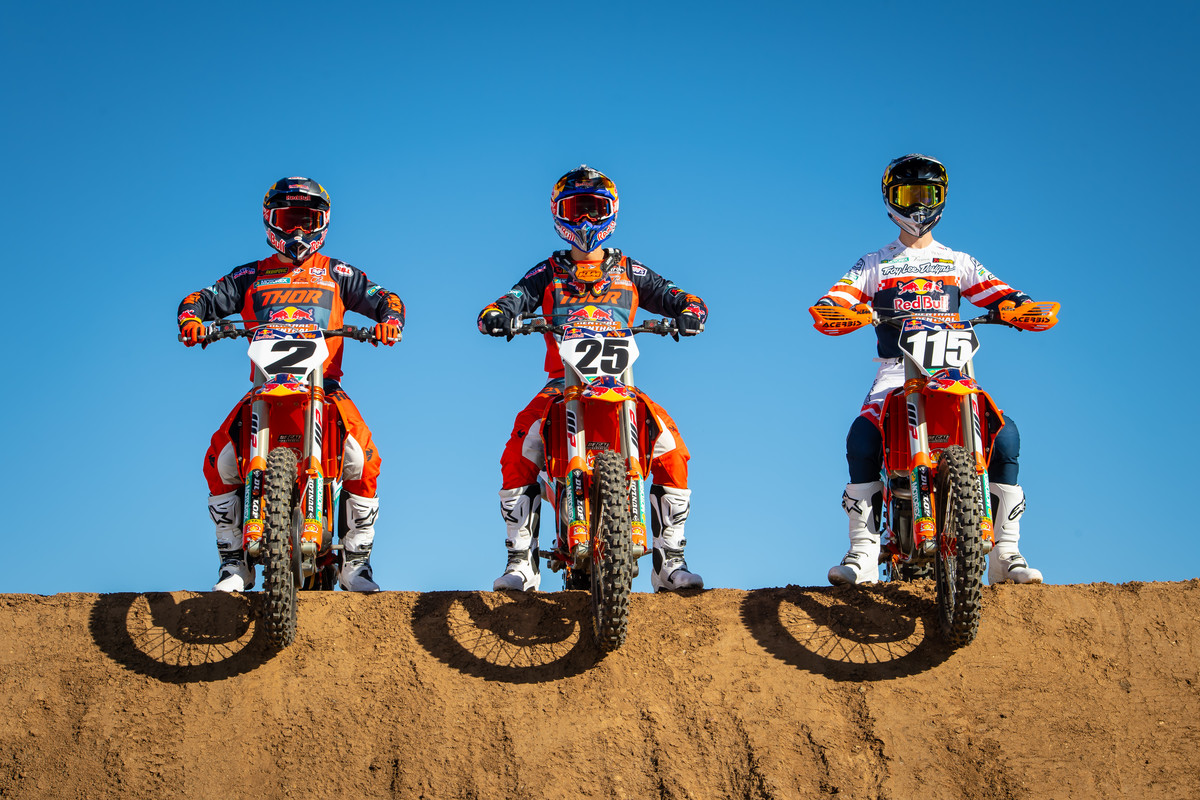 MURRIETA, Calif. – The 2021 AMA Pro Motocross Championship gets underway this weekend in Southern California with the Fox Raceway Pala National. It’s a fresh start to a new chapter in 2021 and Red Bull KTM Factory Racing teammates Cooper Webb and Marvin Musquin are up for the challenge as they prepare to contend the 450MX Championship. They will be joined by rookie Maximus Vohland, who is set to make his professional motocross debut in the 250MX division on Saturday.
Coming off a stellar conclusion to the AMA Supercross Championship, recently crowned two-time 450SX Champion Cooper Webb will dive into his first full season outdoors since 2019, due to a back injury that kept him sidelined him for most of the 2020 summer. Equipped with the championship-proven KTM 450 SX-F FACTORY EDITION, the reigning SX Champ is prepared to fight for a championship sweep in 2021.
Musquin has proven that he has what it takes to contest the premier class championship and the 2020 fourth-place finisher is in a good position to carry it out this season. Coming off a strong 1-2 punch at the final two rounds of supercross, Musquin will look to carry that momentum to the outdoors aboard his KTM 450 SX-F FACTORY EDITION machine.
Rookie Maximus Vohland will return to the Red Bull KTM Factory Racing lineup, debuting his #115 KTM 250 SX-F outdoors this Saturday with his first ride in the AMA Pro Motocross 250 Championship. The 18-year-old showed flashes of brilliance in his rookie supercross season before an injury sidelined him for the latter part of the series and now with an adequate amount of recovery time, Vohland is READY TO RACE into the summer.
Ian Harrison, Red Bull KTM Factory Racing Team Manager: “We’re really excited about the momentum of the team right now – all three riders seem strong, healthy and in good shape heading into the Pro Motocross Series. Obviously, Cooper and Marvin are both coming off an incredible ending to the SX season and they are both very hungry to keep that momentum going into summer, so we expect good things from both of those riders. We’re also excited for the return of Max Vohland to the 250 division as he makes his MX debut this weekend, he’s looking strong so we’ll see how he stacks up outdoors.”
Roger De Coster – Director of Motorsports, North America: We’re thankful for the efforts of MX Sports to arrange 12 individual rounds of racing for 2021, it’s great to have a full MX schedule and to feel some normalcy again. As far as the riders go, Cooper is more prepared for the Motocross series this season. In 2019 after his Supercross title win, he was tired from the stress and constant focus on the title chase and in 2020 he suffered an injury early on. This year, he won SX convincingly but had a bigger break than in past years to relax a little before commencing MX training, so I feel he is more mentally ready this year. Marvin looks really good on the bike and we’re hoping that he’s able to maintain that high coming off his good results at the end of the SX season. It’s exciting to have a 250 rider in-house with the team again and we’re looking forward to seeing Max healthy and lining up for the summer.”
The 2021 AMA Pro Motocross Championship kicks off this Saturday, May 29 with the Fox Raceway National in Pala, California. The 12-round series continues through the summer, concluding on Saturday, September 11 with the iconic Hangtown Motocross Classic in Rancho Cordova, California.
About Michael Le Pard 5838 Articles
"Mr. Totalmotorcycle". Owner and Founder of Total Motorcycle. Supporting over Motorcyclists and Motorcycling for 21 great years. Total Motorcycle is my pride and joy and being able to reach out 330 million people has been incredible but I could not have done it without the support of my visitors, readers and members, thank you so much! You are making a difference to millions of riders worldwide. Thank you.
Website Facebook Instagram Twitter YouTube LinkedIn

October 30, 2020 Michael Le Pard News Comments Off on Husqvarna 2nd but says “it was probably the best I’ve ridden all year” at AMA EnduroCross

Rockstar Energy Husqvarna Factory Racing’s Colton Haaker secured a runner-up finish on Thursday at Round 3 of the 2020 AMA EnduroCross Series at Glen Helen Raceway. Despite a powerful performance, Haaker was forced to battle […]

NO REST FOR HONDA ENDURANCE RACING AFTER 24 HOURS FEST

May 8, 2019 Michael Le Pard News Comments Off on NO REST FOR HONDA ENDURANCE RACING AFTER 24 HOURS FEST