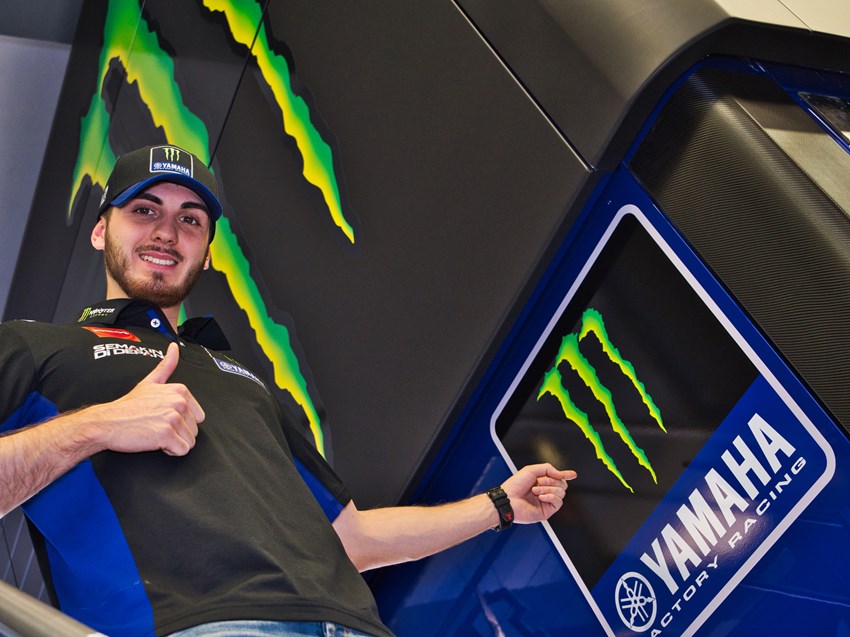 Monster Energy Yamaha MotoGP are proud to be the first team to announce their official Factory Rider for MotoGP eSport with the signing of double eSport World Champion Lorenzo Daretti.

Besides being at the front of the field on track, the Monster Energy Yamaha MotoGP Team also aspire to challenge at the top level of competition in eSports. It is therefore with great delight that the Factory Yamaha team announce their new contract with reigning double MotoGP eSport World Champion Lorenzo Daretti, also known by his gamer name Trastevere73.

The Monster Energy Yamaha MotoGP hospitality was buzzing this evening as journalists from the MotoGP paddock and eSports world attended the official eSport rider media announcement. Yamaha Motor Racing’s Managing Director Lin Jarvis had the pleasure to announce that Lorenzo Daretti will be competing online as a Yamaha Factory Rider.

He introduced a video showing the highlights of Daretti’s career, securing the 2017 and 2018 MotoGP eSport Championship crowns.

With the support of Monster Energy, Alpinestars, Arai and Aldo Drudi, both the Italian youngster and his avatar have matching customised rider gear (leathers, boots, gloves and helmet) for the 2019 season, finishing off the complete Monster Energy Yamaha MotoGP rider look. Leading gaming brand MSI will provide Lorenzo with a high performance laptop for the season.

To show just how well new recruit Daretti fits in the team, he showed off his skills on the big screens, doing a lap around Jerez on the MotoGP™18 game by Milestone, before he went on to challenge any journalists that dared to take on his eSport skills.

Valentino Rossi and Maverick Viñales joined the event at the end of the ceremony to officially welcome the third (eSport) rider to the team, who’s skills have already impressed them.

This year, eSports and MotoGP fans alike can look forward to the 19-year-old defending his eSport MotoGP World Title, as well as to his ‘One Lap Around the Track’ preview videos before every MotoGP round, which will help fans get to know the circuits better.

Furthermore, as Daretti is a biker himself, he will also participate in various Yamaha events on track. One of the first of such opportunities will be the Yamaha VR46 Master Camp in May, which was established as one of the highlight activities promoting Yamaha’s goal to support, encourage, and train young talents from around the world.

“First of all, I want to say ‘Welcome’ to Lorenzo. This is a very special occasion for him as well as Yamaha: he has become the first official eSport rider signed by a MotoGP team. It’s a significant step, as we believe eSports and MotoGP can have a great shared future.

We have kept an eye on the developments of the MotoGP eSport Championship in the last two years and Lorenzo struck us with his talent and professionalism and obviously also with his two World Champion titles. The fact that he is also the proud owner of an R6 that he uses for track days was really the icing on the cake that convinced us he had to be our eSports rider! We wish to support and encourage Lorenzo this season in whatever way he needs.

It won’t be easy to make it a hat-trick crown. eSports is a sector that is rapidly growing, so the competition gets fiercer every year, but we have a lot of faith in Lorenzo’s abilities and are looking forward to a good championship year for him. He will also be joining us at several MotoGP races and other Yamaha promotional events, so we hope the fans of eSports and MotoGP will continue to keep an eye on this young talent and say hello to him when he’s in the paddock.”

“I’m really proud to start this new season as an official eSport rider for Monster Energy Yamaha MotoGP. Being a part of this team, which immediately welcomed me with open arms, is an indescribable emotion.

After two world titles, this year it will be harder to repeat myself, because my rivals are getting more and more professional and determined. But the fact that I am the first officially signed rider in the history of the sport gives me an extra boost and I will prepare myself to the maximum to get ready for the challenge.

I would like to thank Yamaha for the trust they have placed in me since day one, and I’m looking forward to starting the 2019 championship qualifying and beginning this new adventure on the track.”

Monster Energy Star Yamaha Racing’s Christian Craig fired the first shot in the 2021 250SX East Championship with a dominant win on Saturday night in Houston, Texas. Colt Nichols came out on top in the […]