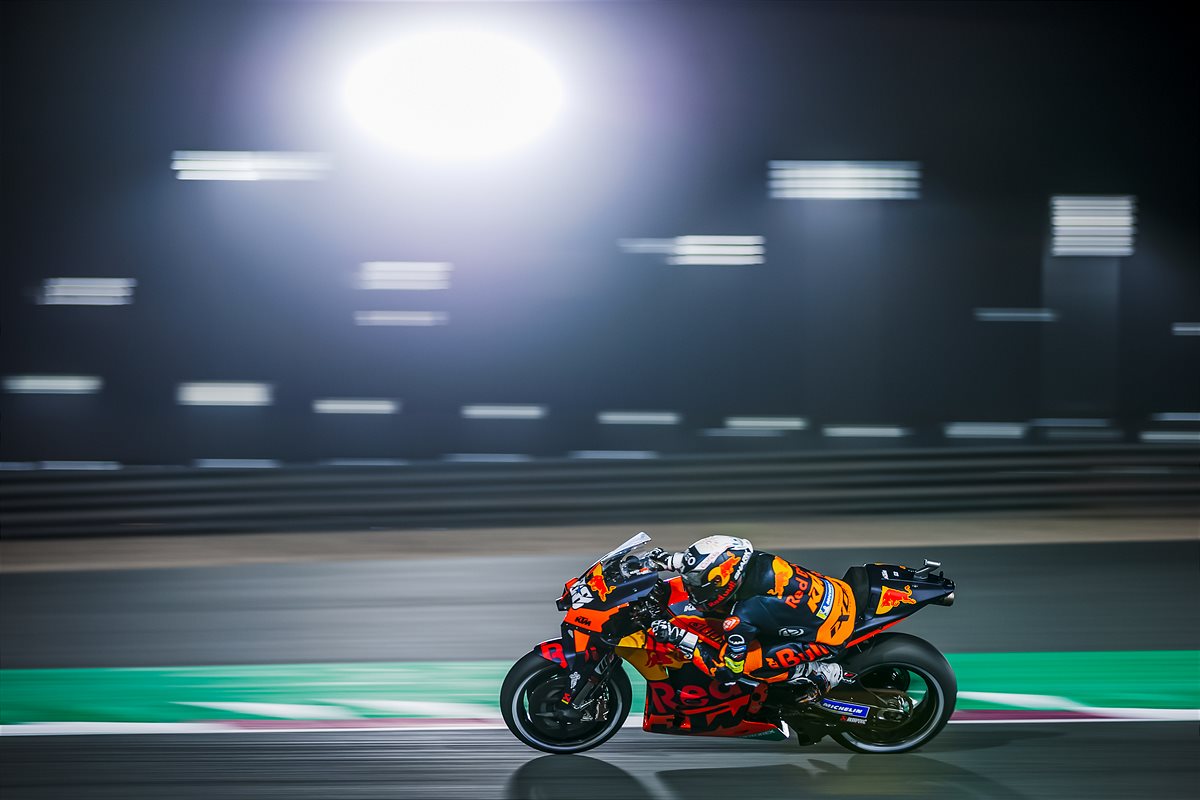 -Oliveira the fastest of the KTM RC16s around the warm, flowing Losail layout
-Two KTM RC4s on the second row of the Moto3™ grid with Jaume Masia sitting 5th
-Raul Fernandez to start from P2 and the front row in Moto2™ debut
After five days of pre-season testing, MotoGP reconvened at the Losail International Circuit for the Grands Prix of Qatar and Doha in the space of a week for a nocturnal and frantic beginning to the 2021 campaign. The fast and weaving circuit has been a traditional home for the opening of the MotoGP championship – now 15 years as the first round – even if the premier class were unable to compete at the facility in 2020.
Red Bull KTM Factory Racing duo Miguel Oliveira and Brad Binder, as well as Tech3 KTM Factory Racing pair Danilo Petrucci and Iker Lecuona, worked diligently to set-up their 2021 machinery through Free Practice on Friday and Saturday afternoon and evenings. The characteristics of Losail were frugal with the strengths of the KTM RC16s in terms of one-lap pace but there was optimism in the KTM camp for the race rhythm and the 22-lap distance to come.
All four riders went into the Q1 qualifying session and it was Oliveira who headed the quartet with a time just 1.2 seconds from the eventual record-breaking Pole Position effort. The Portuguese had lodged inside the top ten and then the top four in the FP3 and FP4 sessions earlier in the day. He was three tenths of a second ahead of teammate Binder in 19th. Danilo Petrucci, who improved his speed in every ‘exit’ and was fractions of a second slower than Oliveira in FP3, was just behind the South African in 20th. Iker Lecuona ranked 21st.
Miguel Oliveira: “The starting position is a bit far from our target but we knew that Q2 would be tricky for us today. We still managed to make our best lap-time ever at Losail. The team really helped me for that in terms of making a step with our settings and allowing me to go faster. We’ll keep our heads up tomorrow because we had good pace in FP3 and FP4 and we just need to understand how we can use the front tire more to be set for a good race. I’m looking forward to tomorrow.”
Brad Binder: “A difficult day because we wanted to try and get through to Q2 but were just a couple of tenths shy of making the cut. I gave 110% and there was not much more I could do. We’ll sleep on it tonight, work hard in the warm-up and fight as hard as we can in the race.”
Danilo Petrucci: “I had my first qualifying with the KTM RC16 and I’m happy about the progress we made, especially in terms of pace. For sure, we still need to improve and I don’t understand why I’m quite slow in some parts of the track, mainly in the final sector.I wanted to be more in front but anyway I’m positive. We have to keep patient and try to upgrade the setup of the bike more and more. I already feel better compared to yesterday but there’s still a lot of work to do.”
Iker Lecuona: “Today has still been difficult. We pushed very hard and tried everything. I improved my lap time and I’m close to the other KTM riders. Obviously,I’m not happy about today’s result but I feel more confident ahead of the first race tomorrow because I could close the gap to Miguel and Brad a bit. Anyway, we still need to work on some things in order to be ready for round one on Sunday.”
Moto2 & Moto3
Jaume Masia will make his Red Bull KTM Ajo Moto3 debut Sunday evening by setting off from 5th position and the middle of the second row of the starting grid. The Spaniard came through the Q2 qualifier just ahead of brandmate Kaito Toba and only six places ahead of new teammate and Grand Prix rookie Pedro Acosta, who tackled his very first Moto3 ‘Saturday’ by clocking an encouraging 11th fastest lap-time.
The Red Bull KTM Ajo squad were able to enjoy a strong Moto2 qualification. New recruits Raul Fernandez and Remy Gardner were rapidly able to show their competitiveness The Spaniard managed a brilliant 2nd on his first outing in the category while Gardner was just three tenths of a second behind and will blast away from 5th on Sunday.
Raul Fernandez: “I’m very happy to qualify on the front row for my debut Grand Prix. I want to thank the team and Remy [Gardner], who helped me on my hot lap. Tomorrow we will see how we fare in the racesince it is a new class for meand testing is different to racing. We have not yet been able to verify that we can do in a race situation. However, I am really looking forward to it.”
Races: March 28th, 2021 – Moto3 16.00 CET | Moto2 17.20 CET | MotoGP 19.00 CET
Results Qualifying MotoGP Barwa Grand Prix of Qatar
1. Francesco Bagnaia (ITA) Ducati 1:52.772
2. Fabio Quartararo (FRA) Yamaha +0.266
3. Maverick Viñales (ESP) Yamaha +0.316
4. Valentino Rossi (ITA) Honda +0.342
5. Jack Miller (AUS) Ducati +0.443
15. Miguel Oliveira (POR) Red Bull KTM Factory Racing (Q1) 1:53.915
19. Brad Binder (RSA) Red Bull KTM Factory Racing (Q1) 1:54.240
20. Danilo Petrucci (ITA) Tech3 KTM Factory Racing 1:54.443
21. Iker Lecuona (ESP) Tech3 KTM Factory Racing 1:54.627
Results Qualifying Moto2 Barwa Grand Prix of Qatar
1. Sam Lowes (GBR) 1:58.726
2. Raul Fernandez (ESP) Red Bull KTM Ajo +0.140
3. Bo Bendsneyder (NED) +0.233
6. Remy Gardner (AUS) Red Bull KTM Ajo +0.471
Results Qualifying Moto3 Barwa Grand Prix of Qatar
1. Darryn Binder (RSA) Honda 2:04.075
2. Izan Guevara (ESP) GASGAS +0.203
3. John McPhee (GBR) Honda +0.283
5. Jaume Masia (ESP) Red Bull KTM Ajo +0.423

An interview with Dennis Marschall: BMW Motorsport is incredibly diverse.

Six promising talented youngsters are part of the BMW Motorsport Junior Programme in the 2017 season. They are all at the start of their careers, but already have an interesting background behind them. As […]

BMW SIM Live 2021 attractive cash prizes are up for grabs

Munich. It is only a few weeks since VRS Coanda Simsport driver Joshua Rogers (AUS) won the grand finale of the BMW SIM 120 Cup at BMW SIM Live 2020. This Sunday already marks the […]