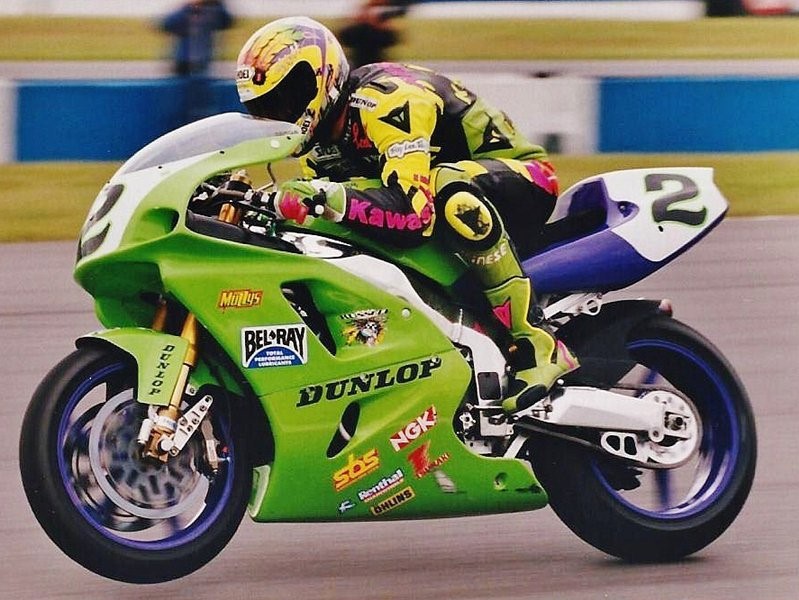 DAYTONA BEACH, Fla. (February 28, 2020) – American Flat Track is thrilled to confirm that “Mr. Daytona” himself, Scott Russell, will serve as the Grand Marshal for the season-opening DAYTONA TT on March 14 at Daytona International Speedway.

Perhaps no motorcycle racing icon and venue anywhere in the world are so synonymous with one another as Russell and DIS. AMA Hall of Famer Russell would still go down as one the greatest American roadracers in history even without his Daytona exploits; during the course of his decorated career he racked up World and AMA Superbike titles, 500GP podiums, a victory in the prestigious Suzuka 8-Hour, and was named AMA Pro Athlete of the Year in 1992.

That said, there’s no question it’s his five DAYTONA 200 triumphs that he’s most fondly remembered for. His DAYTONA legend was earned not only based on the sheer volume of his successes (he’s tied with Miguel DuHamel for the most wins in the race’s glittering history) but also the stunning manner in which he won them, even when pit up against seemingly insurmountable odds.

Russell took his first DAYTONA 200 victory in 1992 in a photo finish over fellow WorldSBK king Doug Polen despite getting fuel dumped all over him during a pit stop. And then in 1995, he memorably crashed on the opening lap only to remount and chase down his fierce rival, WorldSBK all-timer Carl Fogarty, for the win. And in other years, he was simply in a class of his own, destroying fields stacked with national and world championship-caliber contenders.

It’s worth noting that the Georgian’s five wins could have easily been seven; he fell a combined 0.06 seconds short of garnering two additional victories in narrow defeats at the hands of AMA Superbike ace DuHamel and 500GP superstar Eddie Lawson.

Beloved for his flashy riding and gritty substance, Russell endeared himself to legions of fans all over the globe with his cocky “Ru$$el” persona and “Screamin’ Chief” helmet design that’s still popular among racers to this day. His presence is certain to further underline the momentus nature of the inaugural DAYTONA 200/DAYTONA TT doubleheader.

“I’m really proud to be able to named Grand Marshal for the DAYTONA TT and have the opportunity to come back and be involved again,” Russell said. “I watched the TT last year and thought it was really cool. And I hear they are making some improvements to the layout that should make it even better this year.

“It’s awesome to see everybody excited about flat track again and the sport is definitely on the rise. I made it out to the Atlanta Short Track last year, and I could see there are a lot of young, fast guys in the sport that are easy to root for. And it’s probably no surprise that JD Beach is one of my favorites coming from road racing. I expect he’ll be right there in the mix at the DAYTONA TT.

“It’ll be a great day. Running the DAYTONA 200 and DAYTONA TT together is going to be really cool. It reminds me of back in the day when they ran the Supercross and 200 all on the same weekend.”

THAI GP TO KICK OFF THE QUARTET OF FLYAWAY RACES

October 4, 2018 Michael Le Pard News Comments Off on THAI GP TO KICK OFF THE QUARTET OF FLYAWAY RACES

Team Suzuki Press Office – October 3. The Chang International Circuit in Buriram, Thailand, is the newest facility to host a world-class motorcycling event, and will be the scene of the 15th round of the […]

Enjoying a stellar start to his 2018 Dakar Rally adventure, Rockstar Energy Husqvarna Factory Racing’s Pablo Quintanilla made the best of a demanding stage five of the event on Wednesday. Battling his way through a […]