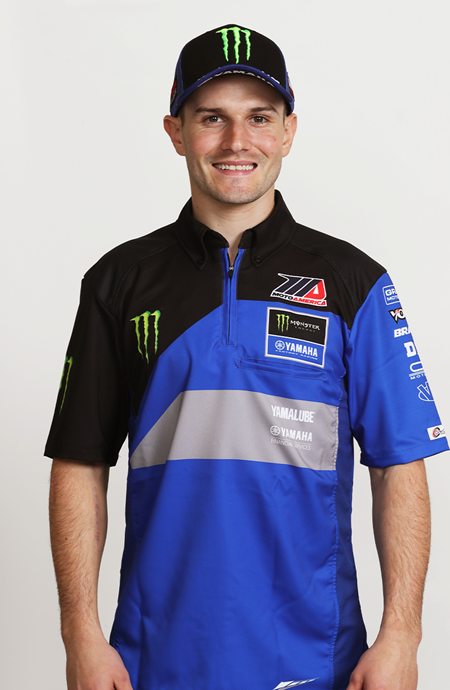 Both Monster Energy Yamalube Yamaha Factory Racing’s Cameron Beaubier and Garrett Gerloff had a good showing with podium appearances at round two of the MotoAmerica Superbike Championship at the Circuit of the Americas.

Saturday’s race one was full of drama with gusty winds, and a down-to-the-wire finish. Beaubier got off to a decent start and was part of the three-rider battle at the front, while his teammate Gerloff had much more difficult early beginnings. A little glitch before the start caused him to not be able to join the grid in front of the pace car and, by rule that forced him to start from the back of the grid. The young Texan had a superb recovery, putting in some flying laps and was able to chase down the leaders by the halfway mark.

It then was a four-way battle for the lead with the Yamaha duo ultimately putting themselves in good position for a podium finish, sitting second and third in the final moments of the race. Beaubier had his sights set on another win, though, and he made one last move for the win in the final corner. Unfortunately, he came up just short, crossing the line .089 of second behind the winner. Gerloff was just behind in third, to put both Monster Energy Yamalube Yamaha Factory Racing YZF-R1s in the winner’s circle at COTA.

Today’s race two had far less drama, but still a solid effort from both riders on a track that was less favorable for the team. Once again Beaubier was fighting up front on the heels of his competitors in third position. Meanwhile Gerloff was locked in battle for fourth further back. The 23yr. old was able to get through on lap four, but the gap was too much to overcome this time around and ultimately had to settle for fourth.

After his rough start to the season at Road Atlanta, Gerloff’s efforts at COTA were rewarded with moving up in the championship standings to seventh. Beaubier, the reigning MotoAmerica Superbike Champion’s consistent podium appearances have him sitting comfortably in second in the title chase.

Up next on the schedule for the Monster Energy Yamalube Yamaha Factory Racing team is round three of MotoAmerica at VIR, May 4-5.

“Normally this isn’t our best track. So overall it was a good, solid weekend for us. We had two great results with both guys, so we’re really happy about that. Cameron was right in there for the win in the first race, just missed it by .089 of a second. He was right there in the second race, too. We’re a little frustrated that we couldn’t pull it off. We were just so close. Like I’ve said before, though, we improved a lot from where we were last year at this point in the season. We’re really happy and we’re confident going into Virginia.”

“Those guys were riding so good today and it was everything I could just to keep pace with them. I might have been able to stuff it up the inside of one of them mid-race, but I think it wouldn’t have really changed much or changed the position that we were going to finish today.

“All in all, I’m happy to get out of here with two podiums. This is the toughest track on the calendar for us. It gives me some confidence going into the rest of the season that we were able to hold pace with those guys, because we’ve always struggled here in the past. So hats off to my Monster Energy Yamaha team. They’ve been working their butts off. We had a good off-season. Made a couple of small improvements with our bike, and I feel like I have my body and my mind in a good place. We’re just ready to keep going.”

“Yesterday’s race was good because we came back from having to start from last place. I felt good. I felt confident. The bike felt really good. It was just nice to see three super fast guys coming back to you when you’re charging. That gave me a lot of confidence going into today.

“Unfortunately, I got stuck behind JD in the beginning of the race when I felt like I could really go. My strong points weren’t his, and his strong points weren’t mine and it just made it hard to make a pass on him. Once I got around him I felt pretty good, but I was just flustered and a little frustrated to have that gap be there between the top three and me. I busted my butt trying to put in good, clean laps, but in the process kind of just made a few mistakes in the slow corners. I did everything I could. At least we closed the gap down on Cameron, so that’s one positive. I’m just ready to go onto the next race. I feel like we have good speed, we have a good bike setup. I’m looking forward to Virginia to see if we can get ahead of these guys.”

Tradition, modern design, history, power, elegance. Words that go well together but extremely hard to put into metal. At the Concorso d’Eleganza Villa d’Este, BMW Motorrad has shocked riders with its re-entry into the cruiser […]

Marc Marquez (Repsol Honda Team RC213V) rode a dazzling race in the trickiest of conditions in today’s Dutch TT, scoring a third-place finish that moves him to within 11 points of the World Championship lead. […]