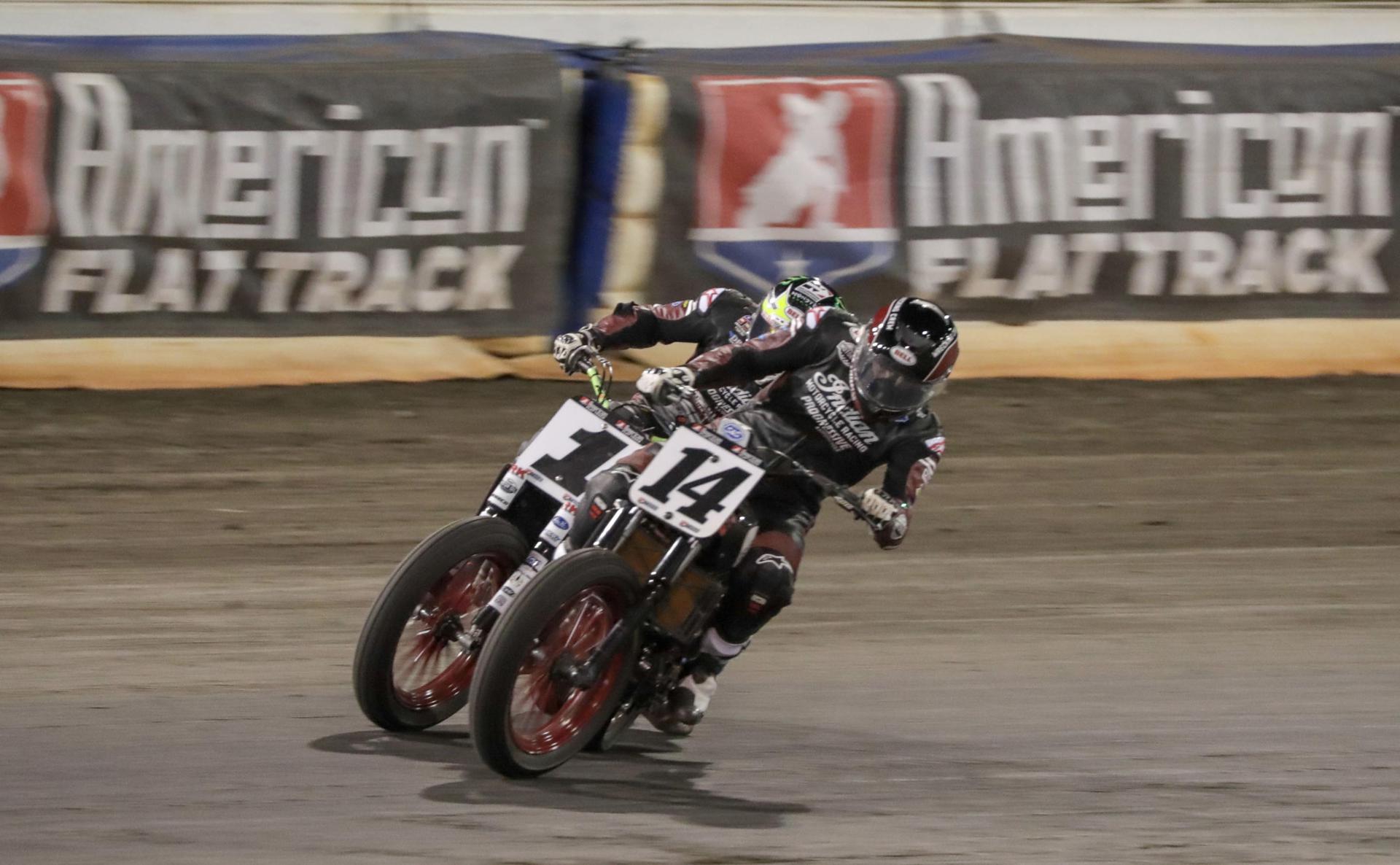 DAYTONA BEACH, Fla. (May 7, 2019) – The 2019 American Flat Track season resumes this weekend as the series arrives in Perris, Calif., for the So-Cal Half-Mile presented by Russ Brown Motorcycle Attorneys on Saturday, May 11.

The year’s AFT Twins presented by Vance & Hines title campaign has already enjoyed considerable parity, as a different rider has stood atop the podium in each of the season’s four Main Events. Yet no premier class pilot has been as consistently excellent as championship leader Briar Bauman (No. 14 Indian Motorcycle/Progressive Insurance FTR750), the only rider to finish on the AFT Twins podium each time out in ‘19.

As strong as his form has been, however, the extraordinarily deep field features numerous others — such as Bauman’s younger brother and Indian Wrecking Crew teammate, Bronson Bauman (No. 37 Indian Motorcycle/Progressive Insurance FTR750) — with the potential to step forward on the Southern California Fairgrounds’ clay Half-Mile and make it five different winners in five races.

Meanwhile, Dalton Gauthier (No. 122 D&D Cycles/Gobert Smash Husqvarna FC450) enters this weekend’s Roof Systems AFT Singles presented by Russ Brown Motorcycle Attorneys with the early points lead on the strength of four top-fives, including a win and a pair of runner-up finishes.

Gaulthier will be expected to contend up front again this weekend, but there’s no shortage of checkered flag contenders on the undercard either. The AFT Singles class produced ten different winners a year ago, and this year’s grid boasts the depth to duplicate or exceed that lofty number.

Chief among the riders still looking for a first victory this season is third-ranked Mikey Rush (No. 15 RMR Honda/Red Riders Rewards Honda CRF450R), who’ll have a bit of extra motivation to perform well in front of his home state fans.

While Shayna Texter (No. 52 Red Bull KTM Factory Racing SX-F 450) already has one victory to her name this season, she needs to string together as many Half-Mile and Mile wins as possible in order to boost her titles hopes in light of her continued TT struggles.

If Texter is able to win again Saturday night, she and her older brother, Cory Texter (No. 65 G&G Racing/Holeshot Powersports Yamaha MT-07), could be in line to double up on their unprecedented achievement when the siblings both won their respective class’ Main Events at the Texas Half-Mile earlier this year. Cory is looking to open the 2019 AFT Productions Twins season two for two as the category picks back up for Round 2 of 11 this weekend.

The action-packed So-Cal Half-Mile will also play host to the Super Hooligan series and provide a variety of entertainment options off track, such as live music, vendors and displays, and STACYC Stability Cycle demo rides and races for kids.

Two levels of ticket packages are available for the So-Cal Half-Mile presented by Russ Brown Motorcycle Attorneys and on sale now at tickets.americanflattrack.com. General admission tickets are $40 when purchased online and $50 at the gate – buy online today to save $10! VIP Experience packages include food and beverage service as well as a reserved, premium viewing area outside Turn 1 of the racetrack. As a family friendly event, kids 12 and under are admitted for free to the general admission areas.

You can watch the feature telecast of the So-Cal Half-Mile on NBCSN with flag-to-flag coverage of both Main Events, enhanced by exclusive features and cutting-edge aerial drone and onboard footage. The telecast will debut on Sunday, May 19, at 12:00 p.m. ET/9:00 a.m. PT and will re-air later that week on Thursday, May 23, at 4:00 p.m. ET/1:00 p.m. PT.

Mahias Storms to Podium in WorldSSP at Portimao

September 19, 2017 Michael Le Pard News Comments Off on Mahias Storms to Podium in WorldSSP at Portimao

GRT Yamaha Official WorldSSP Team’s Lucas Mahias was involved in an exhilarating race-long duel with championship rival Kenan Sofuoglu during Sunday at Portimao for round nine of the 2017 FIM Supersport World Championship. The French […]

Fall is in the air and while the temperatures may be dropping, we’ve got an amazing offer on Moto Guzzi V7 II Stornello to turn the heat up! Don’t let these offers pass you by. […]