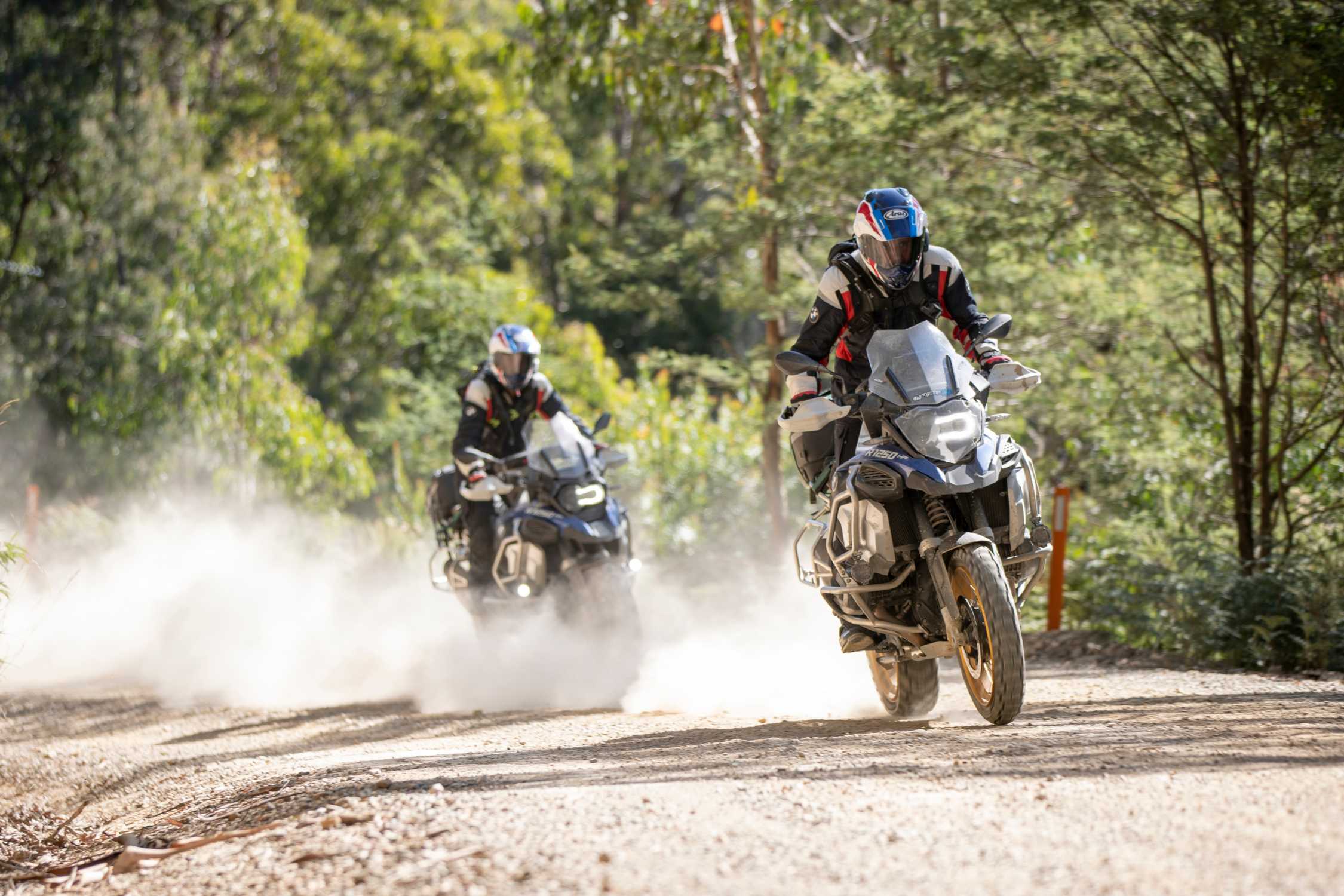 Munich. The corona situation continues to have a worldwide impact. But it should not be forgotten that there are other issues that concern people. In Australia, for example, these are the effects of the devastating bushfires that can still be felt today and will continue to do so. Directly after the 2020 FIM Superbike World Championship (WorldSBK) season opener, the BMW Motorrad WorldSBK Team with riders, Tom Sykes (GBR) and Eugene Laverty (IRL), BMW Motorrad Motorsport Director Marc Bongers and Team Principal Shaun Muir got their own impressions of the damages and met with residents and firefighters affected by the crisis. These were inspiring and emotional encounters. The three-day tour is now documented in a video.

One day after the first race weekend of the season at Phillip Island (AUS), the members of the BMW Motorrad World SBK Team assembled again at the circuit. This time, however, they did not mount the BMW S 1000 RR, but BMW GS motorcycles. This is because they were setting off on a rather special off-road tour, starting out from Phillip Island Circuit that led them through the areas affected by the recent bush fires for three days.

The tour was organised by BMW Group Australia as part of its extensive bushfire relief efforts. For months, Australia was afflicted by devastating bushfires, as a result of which countless people lost their homes, while the fauna and flora suffered massive damage. The initiatives by BMW Group Australia included the donation of 600,000 AUD to the Australian Red Cross Disaster Relief and Recovery appeal – which supports evacuation centres and recovery hubs – and the World Wildlife Fund (WWF), the most influential independent conservation organisation in the world.

As the opening round of WorldSBK traditionally takes place in Australia, the BMW Motorrad WorldSBK Team had decided to team up with BMW Group Australia and do its bit. They did so by swapping the RR for GS motorcycles, gaining a picture of the situation, and meeting the people affected and firefighters on site, who fought for months to prevent the catastrophe.

1,200 kilometres from Phillip Island to Canberra.

The tour started from Phillip Island and led the riders 1,200 kilometres through the southeast of Australia to the capital Canberra. Significantly, the route incorporated sections of the iconic GS Safari, in which BMW Group Australia has played a key role for several years with both a charity focus and provision of heightened experiences for BMW customers.

On the Monday morning after the WorldSBK season-opener, the time had come to get going. Sykes, Laverty, Bongers and Muir assembled at Phillip Island Grand Prix Circuit, where they met up with fellow riders who would be joining them on the tour. They included BMW Group Australia instructors, like Glenn Allerton (AUS), who rides an RR in the Australian Superbike Championship (ASBK). “It was important for us to do this tour,” says Bongers. “The images of the bush fires were all over the media. However, you can only truly grasp the size and the impact when you are actually there.”

They headed cross-country through the state of Victoria to Bright and to the small community of Swifts Creek, both of which were heavily impacted by bushfires. The route then led them through the Alpine National Park, to the state of New South Wales and on to their final destination in Canberra. “We started at the racetrack, but our thoughts were soon turned on their head after just a few metres,” says Sykes. “I left the racing behind me. Obviously riding the BMW R 1250 GS Adventure was incredible fun and a great way to relax after a race weekend, but what we saw next was really quite unbelievable.” For example, the effects of the impact on nature: “The contrasts were clear to see. In the unaffected areas, you could see how it used to be: mile after mile of beautiful countryside with a unique flora and so many animals, from kangaroos, emus, koalas and deer to snakes. Australia is such a biodiverse country and it was awful to see how this had been destroyed by the fires. On the other hand you also then get a feeling of hope when you come to areas, in which new plants, like eucalyptus trees, are rising out of the burnt ashes.”

Meeting the firefighters of Swifts Creek.

The visit to the firefighters in the small community of Swifts Creek, with a population of just 250, was particularly emotional. The firefighters demonstrated their equipment, including how a fire engine’s protective mechanism works when surrounded by an inferno. Laverty and Sykes tried on the jackets and helmets, which the firefighters had worn whilst battling the bush fires in the previous months. The firefighters and residents discussed at length how they experienced the catastrophe – and why, despite the sheer adversity, they refuse to give up and always move forward.

“We had some comprehensive chats and could feel how sincerely happy the people of Swifts Creek were that we made the effort to visit them after the race weekend, to show and express our appreciation. At the same time, talking to the people who overcame this catastrophe were inspirational for us,” says Bongers. Muir adds: “We were overwhelmed by the welcome we received in Swifts Creek. Those people had been through so much in the previous months. We visited them to acknowledge them and show them our respect. They were very grateful – and we were also able to take a lot from our time there.”

In Swifts Creek, the four riders found themselves in the midst of a remarkable story. One of the volunteer firefighters there is Charles Leggett, a huge motorsport fan who himself used to race. Once the bush fires had died down, he was able to watch the opening round of WorldSBK live on Phillip Island, as he does every year. “I have just come from a campsite on Phillip Island, where I followed how Eugene, Tom and the rest of the team got on in the opening races,” said Leggett. “And how fantastic is this? First I watched the races on the weekend, and now I am meeting everyone in person here in our little fire station! Tom Sykes is wearing my firefighter jacket, in which I battled against the bushfires. I am incredibly proud. I would like to thank the whole team for visiting – it has been a special day for us all, and especially for me.”

Never give up and always look forward.

The charity tour reached its destination in Canberra on Wednesday evening. After 1,200 kilometres of cross-country riding, everyone was rather exhausted but deeply moved by what they had seen and experienced. “The whole trip was inspiring but, above all, meeting the people was particularly moving,” says Laverty, speaking on behalf of everyone. “The people were genuinely pleased that we had visited them. And it was a pleasure for us to be able to give them that joy. The Australians’ spirit, which you could feel in all our meetings with the residents, was particularly inspirational: Never give up, fight to the last, and always look forward. That is something we have all taken from this experience.”

Vikram Pawah, CEO of BMW Group Australia, said the visit of international BMW Motorrad Motorsport identities to bushfire-affected regions was a fillip and that it perfectly complemented local efforts to provide aid to those in need. “We were heartened to see the BMW Motorrad WorldSBK Team literally go the extra mile straight after the first races of the season to immerse themselves in the impacted areas and provide a very welcome boost to those who battled so hard through that dreadful situation during the fires,” Pawah said. “The fact that Tom, Eugene, Marc and Shaun did not hesitate for a second when deciding to do this tour shows that they share our spirit and sincere desire to be part of the extensive relief efforts.”

BMW Group Australia has plans in place to continue raising funds for bushfire victims including the auctioning of the BMW GS helmets worn by Sykes and Laverty during the tour for charity.

The video documenting the joint charity off-road tour which the BMW Motorrad WorldSBK Team undertook with BMW Group Australia can be found online at the following link:

Today the TT Circuit Assen hosted the closest battle of the 2018 MotoGP season so far. At one point the front group consisted of eight riders and Movistar Yamaha MotoGP’s Maverick Viñales and Valentino Rossi […]

Tim Gajser and his CRF450RW took a second overall today in the MXGP of Montbéliard. The Slovenian looked relaxed today as he fought through the rain and mud in France to end his season as […]