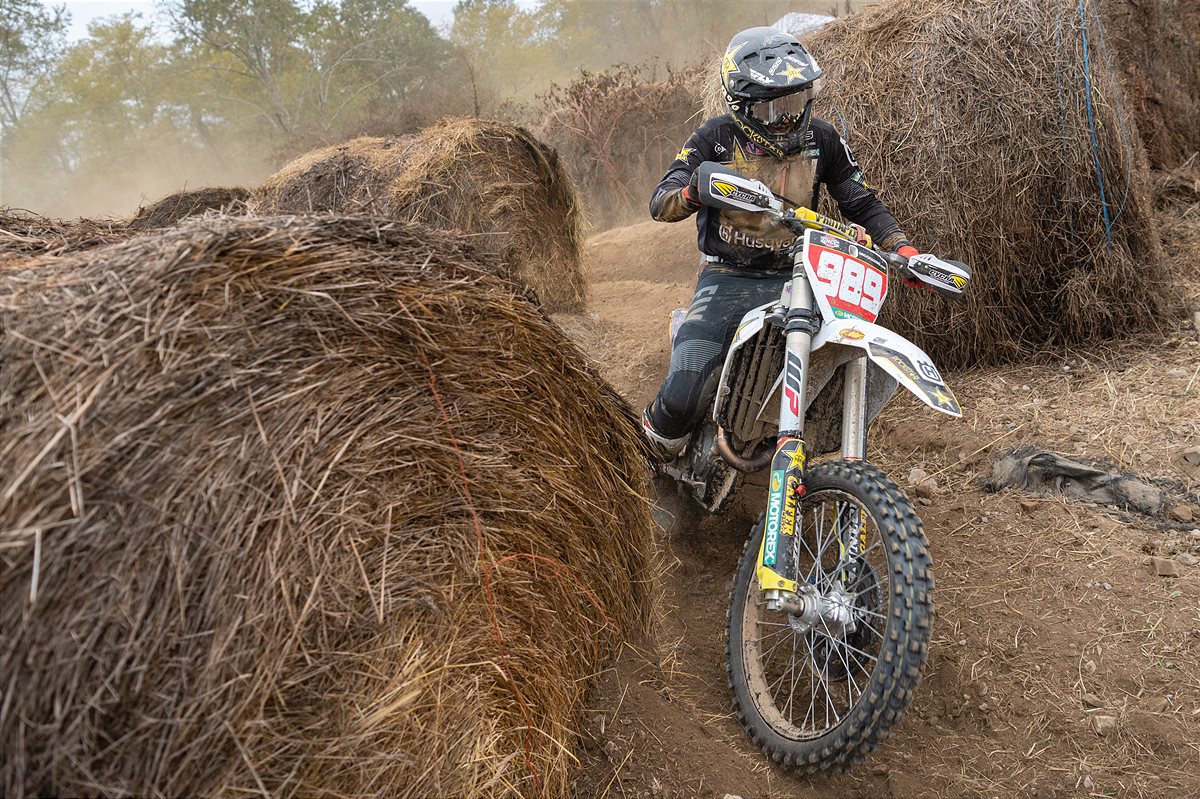 The Rockstar Energy Husqvarna Factory Racing Team fielded a two-rider roster on Sunday for Round 11 of the 2020 AMA Grand National Cross Country (GNCC) Series with XC1 Open Pro front-runner Thad DuVall returning to GNCC Racing for the first time since having knee surgery in March. DuVall made his presence known as he battled his way to a hard-fought fourth overall, while his teammate Craig DeLong earned another podium finish in the XC2 250 Pro class where he continues to fight for the title with two rounds remaining in the series.
XC1 Open Pro
DuVall got off to a top-five start and he battled just outside podium contention for the first two laps. On lap three, he made a move into third and engaged in a battle for the final podium spot. He was eventually passed by a hard-charging Ben Kelley and he continued to fight into the second half of the three-hour race. With two laps to go, the race leader went down and that gave DuVall another opportunity to battle for a podium position and he capitalized by making a late-in-the-race charge on newly-crowned champion Kailub Russell, closing the gap to 1.6 seconds with one lap to go. Despite the extremely dusty conditions, DuVall pushed hard on the final lap to ultimately finish only 1.3 seconds off the overall podium in fourth.
“This was my first GNCC back in six months after knee surgery and I was pretty nervous but I got off to a really good start and just kind of tried to ride my own race,” DuVall said. “I wasn’t sure where my fitness would be for a whole three hours but I paced myself and I felt good the whole race. I gave it my all in those last two laps and I’m happy with fourth.”
XC2 250 Pro
DeLong didn’t get a favorable start but he put his head down and made a charge through the field to ultimately bring himself into podium contention around halfway. Sitting in third with an hour to go, DeLong eventually made the pass for second as the two-lap card came out and he pushed on the final lap to finish only 12 seconds back from the leader in second.
“It was a tough day,” DeLong said. “I got a terrible start and spent the first two laps playing catch up. I found my groove and started picking people off – I was trying to have as much fun as I could. I got into second and caught the leader and then had to make a pit stop. I tried to play catch up on the last lap but I couldn’t get around Cody for second. All-in-all, it was a good day and I’m pretty happy with how it ended up considering how it started.”
Next Event: Round 12 – Ironman GNCC – October 25, 2020
Mason-Dixon GNCC Results
XC1 Open Pro Class Results
1. Steward Baylor Jr. (YAM)
2. Ben Kelley (KTM)
3. Kailub Russell (KTM)
4. Thad DuVall – Rockstar Energy Husqvarna Factory Racing Team
XC2 250 Pro Class Results
1. Mike Witkowski (YAM)
2. Cody Barnes (BET)
3. Craig DeLong – Rockstar Energy Husqvarna Factory Racing Team
XC2 250 Pro Championship Standings
1. Jonathan Girroir – 270 points
2. Craig DeLong, Rockstar Energy Husqvarna Factory Racing Team – 266 points
3. Mike Witkowski – 264 points
About Michael Le Pard 5304 Articles
"Mr. Totalmotorcycle". Owner and Founder of Total Motorcycle. Supporting over Motorcyclists and Motorcycling for 21 great years. Total Motorcycle is my pride and joy and being able to reach out 330 million people has been incredible but I could not have done it without the support of my visitors, readers and members, thank you so much! You are making a difference to millions of riders worldwide. Thank you.
Website Facebook Instagram Twitter YouTube LinkedIn

Five wins and a total of 13 podiums: BMW riders continue their run of success in international and national championships

May 30, 2018 Michael Le Pard News Comments Off on Five wins and a total of 13 podiums: BMW riders continue their run of success in international and national championships

Munich. The BMW racers continue their run of success in international and national championships. Their haul from the weekend: five wins and a total of 13 podiums. In the MOTUL FIM Superbike World Championship (WorldSBK), […]

Rockstar Energy Husqvarna Factory Racing’s Colton Haaker headed to round two of the AMA Endurocross Series held in Reno, NV looking build off the momentum he started after a dominating performance at the season opener. […]