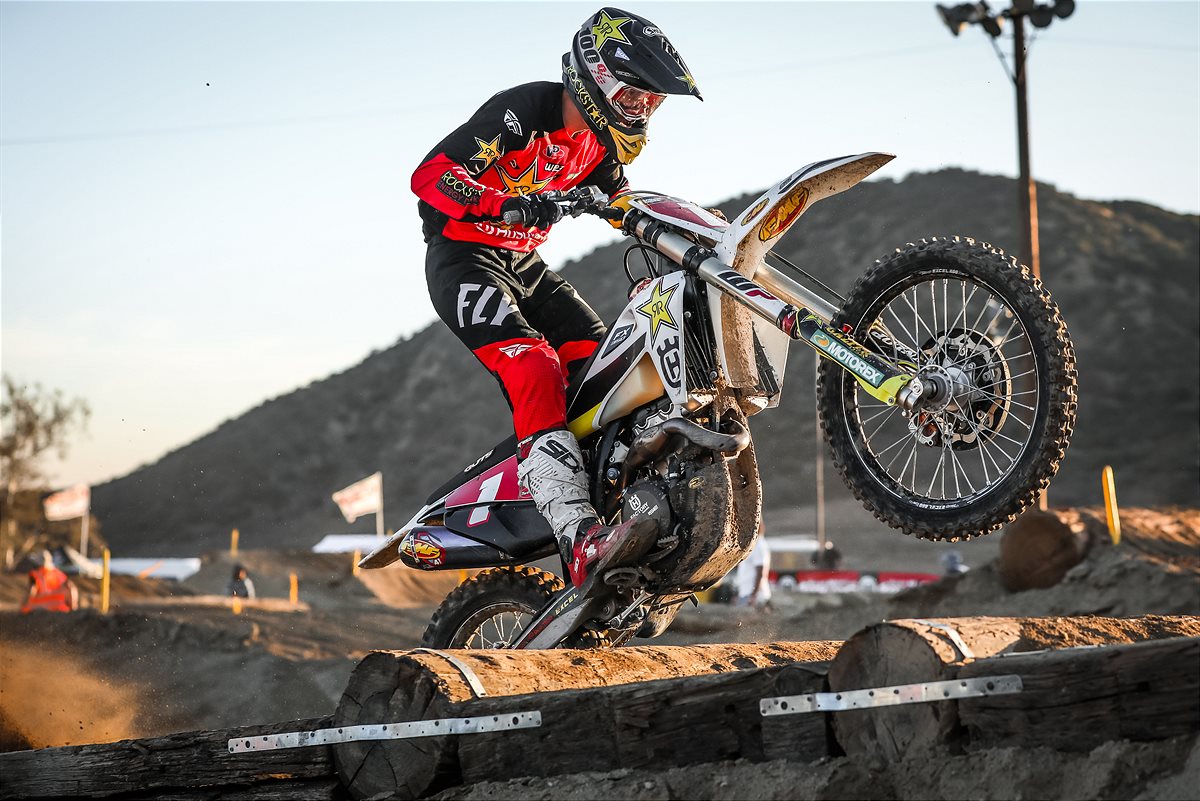 Rockstar Energy Husqvarna Factory Racing’s Colton Haaker secured a runner-up finish on Thursday at Round 3 of the 2020 AMA EnduroCross Series at Glen Helen Raceway. Despite a powerful performance, Haaker was forced to battle through adversity where he came away with 1-3-2 moto scores to maintain his lead in the overall championship standings.
In race one, Haaker powered his Husqvarna FX350 into the holeshot but he was passed early on the opening lap. The points leader patiently sat back for the first few laps before making his move into the lead on lap three and he never looked back, capturing the race-win by almost six seconds over the second-place rider.
With an inverted start in Moto 2, Haaker lined up on the second row and he got off to a mid-pack start before working his way into the lead on lap four. Leading the way with two laps to go, Haaker experienced some unfortunate luck as a lapped rider got his bike tangled up with Haaker’s in the rock section, ultimately dropping the reigning champion back to third. Haaker quickly re-mounted and put forth a strong finish to salvage a podium result with third-place in Moto 2.
Race three didn’t start off as planned for Haaker, who went down in the first turn to kick off his final stretch of the night in dead last. He quickly climbed up to a top-five position by lap two and he kept the momentum rolling as he positioned himself in the second-place spot with three laps remaining. With the overall win on the line, Haaker charged his way into the lead on the final lap but he was overtaken once again to ultimately finish second in the race and second overall on the night.
“Overall, I ended up second but it was probably the best I’ve ridden all year,” Haaker said. “Tonight, we just had some weird circumstances but I still feel like it was a good day and I just have to take the positives and move on.”
Super Pro Class Results – Round 3
1. Trystan Hart, 2-2-1, KTM
2. Colton Haaker, 1-3-2, Rockstar Energy Husqvarna Factory Racing
3. Cody Webb, 3-1-3, Sherco
…
7. Noah Kepple, 9-4-9, Husqvarna
Super Pro Class Championship Standings
1. Colton Haaker, 72 points
2. Trystan Hart, 65 points
3. Cody Webb, 62 points
…
6. Noah Kepple, 43 points
About Michael Le Pard 7738 Articles
"Mr. Totalmotorcycle". Owner and Founder of Total Motorcycle. Supporting over Motorcyclists and Motorcycling for 23 great years. Total Motorcycle is my pride and joy and being able to reach out 375 million people has been incredible but I could not have done it without the support of my visitors, readers and members, thank you so much! You are making a difference to millions of riders worldwide. Thank you.
Website Facebook Instagram Twitter YouTube LinkedIn

Ahead of the maiden Yamaha R3 bLU cRU European Cup season, there were no favourites for the championship title, but it quickly became clear that Iker Garcia Abella would be one of the main protagonists. […]

DAYTONA BEACH, Fla. (February 3, 2020) – American Flat Track announced today a multiyear renewal of its long-standing partnership with Vance & Hines. As the AFT SuperTwins class makes its 2020 debut, the premier class of AFT will once […]