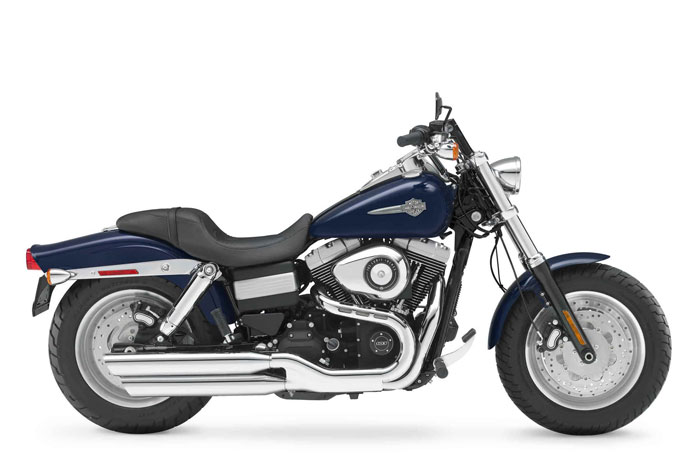 Twin Cam 103™ engine with 103-cid (1690cc), rubber-mounted within the frame, is rated at 100 ft. lbs. of torque at 3500 RPM. The engine is equipped with Electronic Sequential Port Fuel Injection (ESPFI) and is mated to a 6-speed Cruise Drive® transmission.

Highlights of the 2012 Harley-Davidson line include:

The Twin Cam 103™ engine powers all 2012 Dyna®, Softail® and Touring models with the exception of the Dyna Street Bob® and Dyna Super Glide® Custom. This engine produces up to 100 ft lbs. peak torque, an increase of approximately 6 percent over the Twin Cam 96 engine it replaces as standard power for many of these models. The Twin Cam 103 is equipped with automatic compression release. It features identifying badges on the derby cover, timer cover and air cleaner trim ring. in one. All Harley-Davidson Softail models get the performance boost of the Twin Cam 103 engine for 2012. The Fat Boy and Fat Boy Lo have a new reduced-reach handlebar for more-comfortable ergonomics. A lower, narrower seat shape places the Fat Boy rider in a new “in the bike” position. The Softail Deluxe and Heritage Softail Classic will be available with a new optional “tubeless” Chrome Aluminum Profile Laced wheel option for ease of tire replacement and repair. The Twin Cam 103 powertrain gives all Harley-Davidson Touring models assertive power for passing. On Touring models, the Twin Cam 103 is equipped with an oil cooler.

The knowledge of what makes an engine truly move a rider runs deep at The Motor Company, and it was put to good use when we created the Twin Cam 103 engine. We sweated bullets perfecting every cubic inch, pushing design and technology forward. And we did it all without compromising one bit of Harley-Davidson’s unique styling. Evolved, yet carrying on the legacy of the Flathead, Knucklehead, Panhead, Shovelhead®, Evolution®, Twin Cam 88® and Twin Cam 96™ engines that came before. The performance and durability are a direct result of the untold miles logged on the V-Twin since 1909, and the proud heritage that comes from a century’s worth of commitment to life on two wheels.

Fire up the Twin Cam 103 engine and feel the low-end torque unleashed. Thanks to the lightweight piston design, delivery of the added power is more refined than ever. Then put your foot on the shifter and feel how the engine and Six-Speed Cruise Drive® transmission were designed to work together. Six speeds. A strong driveline and strong internal parts. Low routine maintenance. And a low cruising rpm couldn’t feel better.

Feast your eyes on the Twin Cam 103™ engine and there’s no mistaking its roots. This is authentic Harley-Davidson style through and through with an attention to detail you won’t find from any other motorcycle company. Black powder-coated heads and cylinders are highlighted by machined cooling fin tips and polished rocker covers. It’s a jewel machined out of metal. Pure. Dripping with power. From the classic edge of the cooling fins to the clean lines of cases and covers—the Twin Cam 103 engine makes an ironclad statement about holding on to what’s right and staying true to what satisfies.

You want a ride that rumbles—not begs for mercy—when you lean on it a little. The Six-Speed Cruise Drive provides smooth, quiet shifting and reduces engine speed on the highway, so you get a better match between engine turnover and road speed. And the Isolated Drive System makes acceleration flow in a smooth, steady stream from your wrist right down to the pavement. It’s a rare ride when a bike responds like this, and a low growl goes a long way when you’re opening up the road ahead.