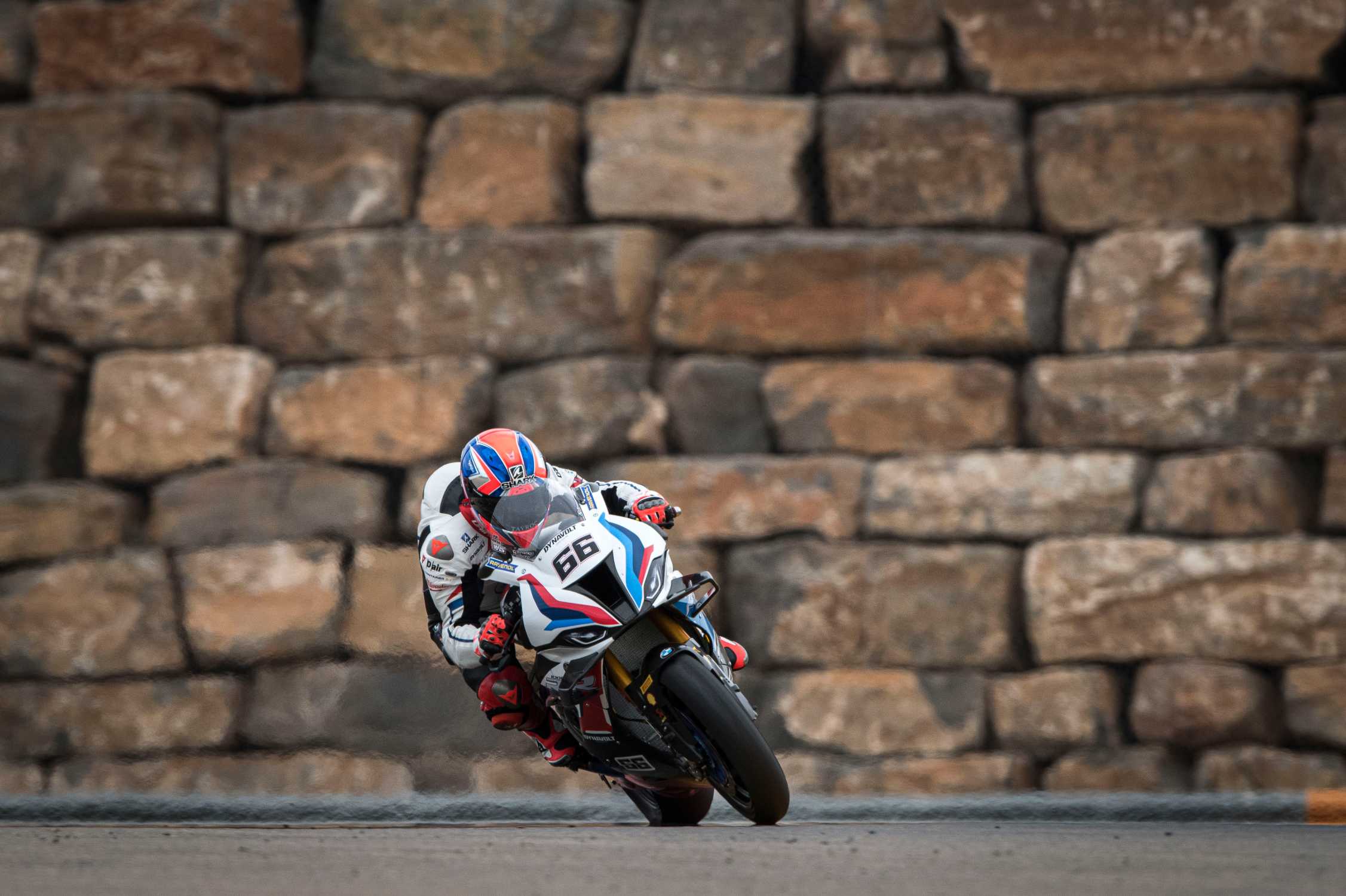 Alcañiz. Making its race debut in the FIM Superbike World Championship (WorldSBK), the new BMW M 1000 RR claimed a top-six result on the first attempt. Tom Sykes (GBR) from the BMW Motorrad WorldSBK Team ended race one at MotorLand Aragón in sixth place, only two seconds from a podium position. The Spanish circuit is hosting the opening round of the 2021 WorldSBK season. His team-mate Michael van der Mark (NED) came home eleventh in race one, after enduring a difficult Saturday.

In the first Superpole of the season on Saturday morning, Sykes secured a starting place on the front row of the grid; the Englishman finished third in qualifying. Van der Mark was 15th. In the morning’s free practice, van der Mark could only do one timed lap as a CAN-Bus failure occurred in the supplied tyre pressure monitoring system TMPS, mandatory by FIM, that could not be identified immediately.

Sykes lost a few positions in the first lap of the race. For long stretches of the race, he was running eighth. However, he then climbed into sixth in the closing stages, partly being the fastest rider of the field. Van der Mark moved into eleventh place early on in the race, and eventually crossed the finish line in the same position.

Jonas Folger (GER) started the race from 18th place. After 20 laps of racing, the rider from BMW satellite team Bonovo MGM Racing finished 16th, missing out on the points by just one position. Eugene Laverty (IRL) from BMW satellite team RC Squadra Corse started from 12th and was on course to score points but had to retire with five laps remaining.

Reactions after race one at MotorLand Aragón.

Marc Bongers, BMW Motorrad Motorsport Director: “I am very happy with our performance. In the end, Tom was just 2.5 seconds off a place on the podium. It was an impressive race. After the issues we had in yesterday’s warm conditions we did pretty well today. In Michael’s case, it is just good that he now has a race under his belt. After his crash yesterday and the technical issue this morning, he was only able to complete multiple laps in qualifying. We must now take a look – it was the first long run he has managed here, and I am sure it will allow us to take another step forward. On the whole, my summary would be: satisfied.”

Shaun Muir, Team Principal BMW Motorrad WorldSBK Team: “From where we were in the free practices and in qualifying, I had my personal predictions and I am really pleased that Michael and Tom kind of got where I hoped that they would be. Michael was almost in the top ten after the crash he had in yesterday’s practice and the issue this morning, so it was good for him to get a race under his belt. I think he will come back much stronger tomorrow from that. With Tom I am really pleased; he did a superb job to get third in Superpole. In the race, he went with the ‘X’ tyre which isn’t normally his style, but we convinced him it was the way to go and he got started and become strong when the other guys were battling, managing to bridge the gap. He crossed the line just two seconds off the podium and if you would have asked me before that weekend had started, I would have taken that. So delighted for top-six for Tom, and Michael will do big steps forward. Overall, we are happy.”

Tom Sykes, BMW Motorrad WorldSBK Team: “We came here and we still had some test items that we needed to do and honestly I thing we got a good compromise because we have been trying things in free practice and still got to try to work on a race set-up, so overall I think it was not too bad. I still don’t have the package to do want I want in the first quarter of the race. Then I could see that towards the end of the race that we had quite a good pace, certainly better than the guys in front. It is still early days and to be honest, considering the limitations I felt I had, I think that P6 is not bad. Now we have time to sit down and have a look and make some changes for tomorrow. So overall, it was not a bad start.”

Michael van der Mark, BMW Motorrad WorldSBK Team: “We were really unlucky this morning. We lost a lot of time as we had that problem with the bike. At the end, the guys fixed it and I could do one lap in FP3 but still I need more laps after losing yesterday. Superpole was not so bad but it was the first time with a qualifying tyre for me and the bike changes a lot so you have to get used to it. In the race, I had an okay start and the first few laps I was feeling very strong but at one point of the track I was losing too much to stay with the other guys. Just one particular sector. That was a bit of a shame because then I tried to push more and stressed the front tyre too much and started to lose time. But overall it was important to finally do a long distance and we can learn a lot from this. Tomorrow is a new day and with all the information we have now, tomorrow should be better.”

Jonas Folger, Bonovo MGM Racing: “It was a tough race. We have to find some solutions, as I do not feel comfortable on the bike. It is unfortunate, as we have tried out a lot of things. So far, however, we have not yet found the right set-up. At the moment, we are on a bit of a low. I did the best I could, but it was  a disappointing race.”

Eugene Laverty, RC Squadra Corse: “Qualifying was actually really good, even if a 12th position is not on the front rows, but the bike felt very good. Unfortunately, in the race, we had some small problems from the beginning and in the closing stages something strange happened. The bike stopped and we are still investigating the cause. But the potential of the bike this year is much better. That’s the positive thing I can say. In qualifying the bike was feeling much better than last year here at Aragón.”

About Michael Le Pard 5839 Articles
"Mr. Totalmotorcycle". Owner and Founder of Total Motorcycle. Supporting over Motorcyclists and Motorcycling for 21 great years. Total Motorcycle is my pride and joy and being able to reach out 330 million people has been incredible but I could not have done it without the support of my visitors, readers and members, thank you so much! You are making a difference to millions of riders worldwide. Thank you.
Website Facebook Instagram Twitter YouTube LinkedIn

The Rockstar Energy Husqvarna Factory Racing Team duo of Jason Anderson and Dean Wilson headed to Las Vegas, NV for the seventh running of the Monster Energy Cup to duke it out with the world’s […]

September 6, 2018 Michael Le Pard News Comments Off on TO MISANO ADRIATICO FOR THE 13TH ROUND OF 2018

Team Suzuki Press Office – September 5. The MotoGP World Championship has moved south to Italy for the thirteenth round of the season, held at the Marco Simoncelli World Circuit in Misano Adriatico. The Italian […]