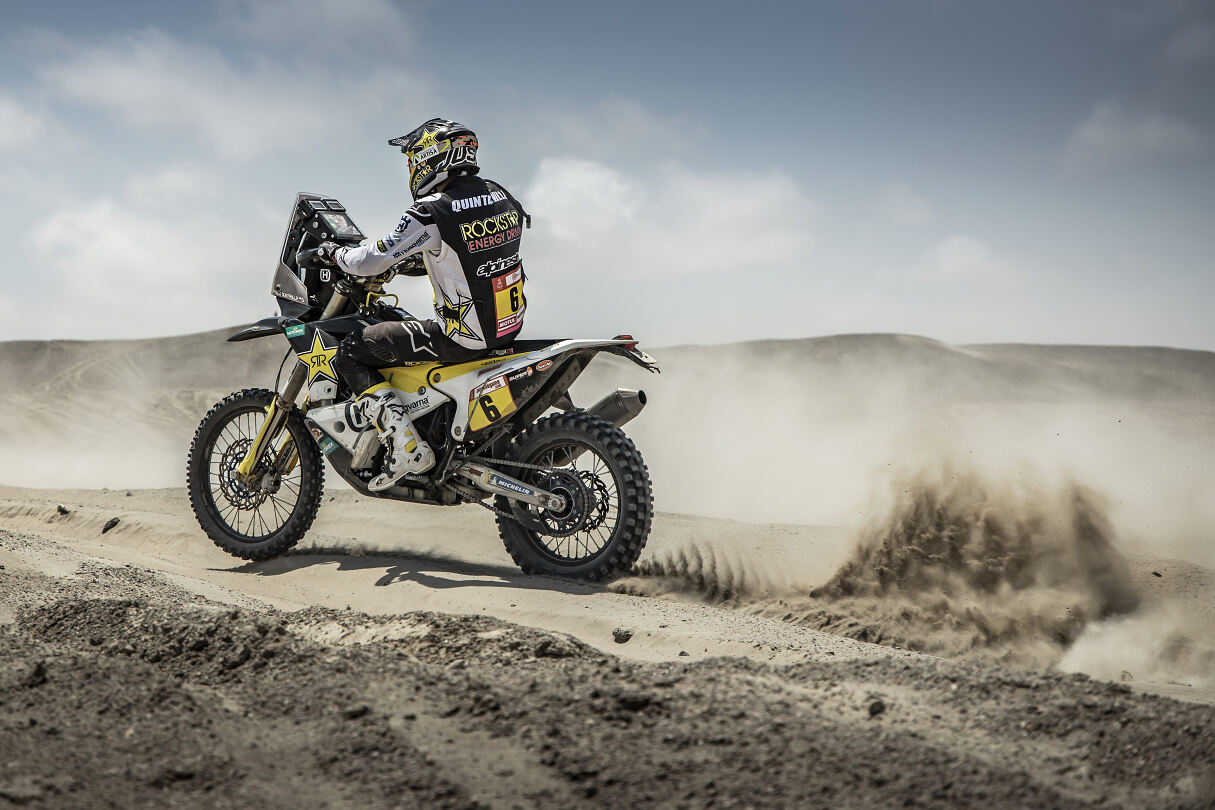 Making light work of a physically taxing stage of the Dakar Rally, Rockstar Energy Husqvarna Factory Racing riders Pablo Quintanilla and Andrew Short have both finished inside the top five on Tuesday’s stage eight. Picking up a few positions in the provisional overall results, they are now placed second and seventh respectively with two stages to go.

Taking full advantage of his strong starting position from the second wave of competitors, Pablo Quintanilla posted the second best time for the day. Gaining an impressive three positions in the overall, Pablo is now second and less than two minutes behind the provisional leader Toby Price.

Going from strength-to-strength in this year’s Dakar, Andrew Short put in another strong performance on Tuesday to secure a solid fifth place result in stage eight. The second Husqvarna mounted rider inside the top 10, Andrew is currently seventh in the event’s provisional overall standings.

Tomorrow’s stage nine features another mass start. A loop around the city of Pisco, the stage includes a 313km timed special in the massive dunes of Peru.

Pablo Quintanilla: “Everything went according to plan for me today. After the mass start in the morning I found myself racing alone for some time, before starting to catch up with the riders from the first wave. Today’s stage was not easy. It was physically and mentally tough but I did my best pushing all the way to the finish. We’re nine days into this race and we’re all starting to feel the effects of these tough stages on our bodies. I’m really happy with where I’m at in the overall. The gap with Toby is small and we still have two more days of racing. I will try to stick to my plan and continue giving 100% until the end of the race.”

Andrew Short: “It was interesting to start the stage alongside the cars. A few kilometres into the stage I got passed by Nani Roma’s car and he was going really fast on the roads. But then once it got bumpy I was able to pass him and do my own race. After the fuel stop we entered the dunes and they were massive. I got to ride alongside a few other riders and our pace was good. Today there were lots of riders struggling with bike issues or making mistakes in navigation. For me personally I felt really good. I was going as hard as I could for most of the stage and for the last 30 kilometres I felt fatigued so decided to keep it steady. I’m trying to get better on every stage and every day and that’s what matters the most for me.”