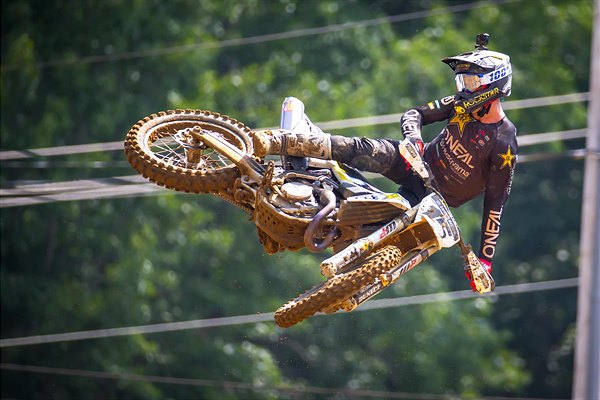 Husqvarna Motorcycles are pleased to announce that Dean Wilson has signed a one-year contract extension that will see him continue to race for Rockstar Energy Husqvarna Factory Racing. The 27-year-old is set to compete in the 2020 AMA SuperCross and Pro Motocross Championships aboard the Husqvarna FC 450 ROCKSTAR EDITION.
Wilson, who rode for Rockstar Energy Husqvarna Factory Racing in 2017 and 2018, began the 2019 AMA SuperCross season as a Husqvarna Motorcycles supported rider and joined the team’s factory efforts at round six after defending champion Jason Anderson dropped out of the series with injury. From there, Wilson put forth a steady string of top-10 finishes in the premier 450SX class including four top-five finishes, one of which was a third-place at the Houston SX. Although his season ended early with an injury, Wilson ultimately finished the year sixth overall in the 450SX-class standings. He rejoined the Pro Motocross Championship just after the halfway point where he continued to secure solid top-10 finishes to close out the season.
Wilson is set to line up for the forthcoming 2019 MEC event taking place this Saturday, October 19 in Las Vegas. From there, he will head abroad to Auckland, New Zealand to compete in the S-X Open and then the AUS-X Open in Melbourne, Australia.
Dean Wilson – Rockstar Energy Husqvarna Factory Racing: “I’m very honoured to be in the position I am now with the Rockstar Energy Husqvarna Factory Racing team and I am just very thankful and appreciative of this opportunity. I am going to do my best and have fun – looking forward to a good 2020 season!”
Bobby Hewitt – Rockstar Energy Husqvarna Factory Racing Team Manager: “We’re excited about 2020 and the addition of Dean Wilson to our 450 roster. Dean has been part of our program for many years and is a great asset to the Rockstar Energy Husqvarna Factory Racing team. We look forward to seeing him compete in the upcoming 2020 season.”
About Michael Le Pard 4911 Articles
"Mr. Totalmotorcycle". Owner and Founder of Total Motorcycle. Supporting over Motorcyclists and Motorcycling for 21 great years. Total Motorcycle is my pride and joy and being able to reach out 330 million people has been incredible but I could not have done it without the support of my visitors, readers and members, thank you so much! You are making a difference to millions of riders worldwide. Thank you.
Website Facebook Instagram Twitter YouTube LinkedIn

Electric Harley’s, Show N’ Shine and Stunters – The Vancouver Motorcycle Show is Back

Greater Vancouver, BC – The Vancouver Motorcycle Show is bringing the best and newest motorcycles, scooters, ATV’s and side-by-sides to Tradex in Abbotsford January 24-26. Powersports fans from across BC and the Pacific Northwest have […]

The GRT Yamaha Official WorldSSP Team head this week to the Autodromo Internacional do Algarve in Portimão, and Round 9 of the 2018 FIM Supersport World Championship, with their sights set firmly on the podium. […]