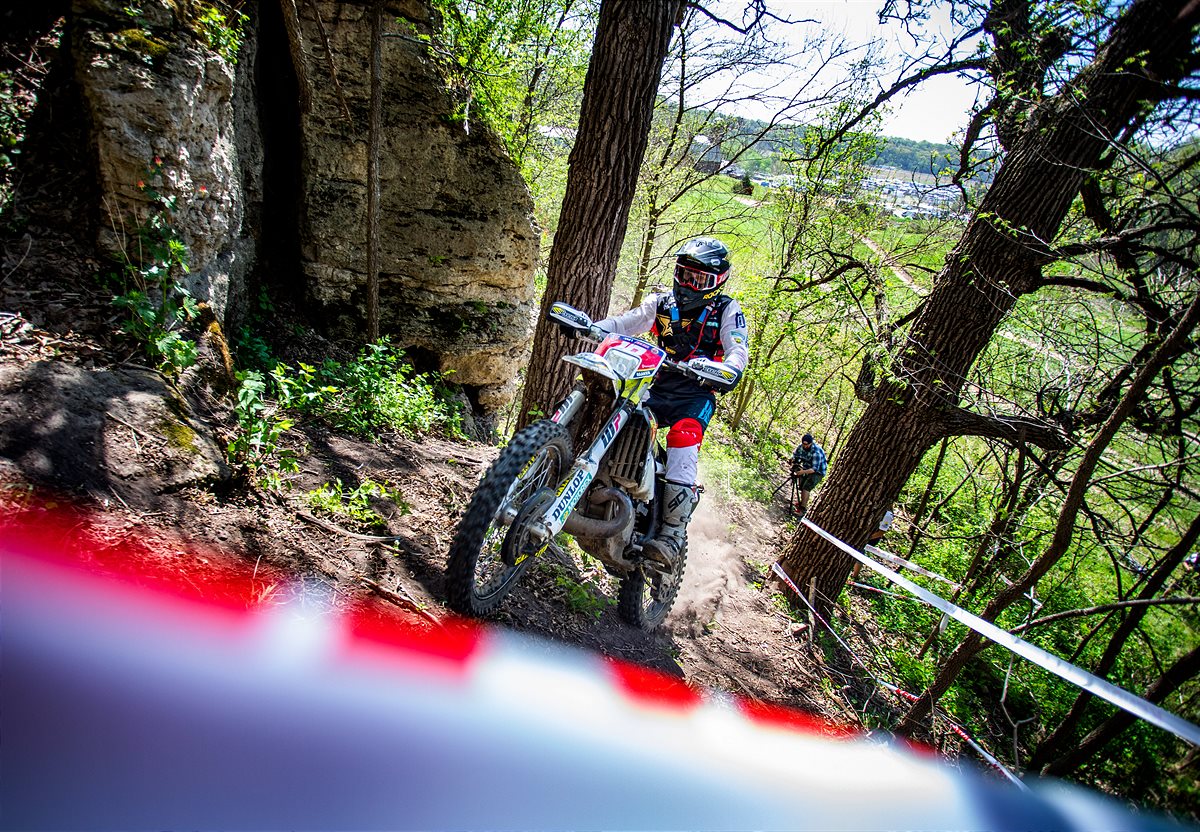 The 2021 AMA Extreme Championship returned to action on Sunday with Round 2 of its western series in Spragueville, Iowa. Rockstar Energy Husqvarna Factory Racing’s Colton Haaker had a solid day, finishing third overall with a pair of hard-fought 3-3 finishes at the Iowan Hard Enduro.
With a race format consisting of a hot lap and two separate motos for the pro racers, Haaker remained consistently up front throughout the day. The reigning AMA EnduroCross Champion earned himself a front-row start for the first race following a strong third-place finish in the hot lap session.
In race one, Haaker got off to a good start and quickly put himself into the lead. He diced up front for the rest of the race, ultimately finishing third. In the final race, he got off to a fourth-place start but he made a mistake stalling the bike going up one of the hills and dropped back to fifth early on. He put his head down and charged up to third, where he started to gain momentum. However, late on the second lap he experienced a crash that set him back once again. Re-mounting, Haaker put on one last charge to ultimately fight his way back into podium contention late in the race, finishing third in the race and third overall for the day.
“This weekend, I was more in the mix and ran up front a lot,” Haaker said. “I was pushing hard but I had a couple too many mistakes that kept me from finishing better. Even though the overall result is the same as the last round, progress was made! I’m going to take the positives and have another go at it in two weeks for Last Dog Standing!
Next: Last Dog Standing – May 15-16 – San Bernardino, California
Overall Pro Results
1. Trystan Hart (KTM) 1-2
2. Cody Webb (Sherco) 4-1
3. Colton Haaker – Rockstar Energy Husqvarna Factory Racing, 3-3
…
5. Ryder Leblond (Husqvarna) 6-5
About Michael Le Pard 5600 Articles
"Mr. Totalmotorcycle". Owner and Founder of Total Motorcycle. Supporting over Motorcyclists and Motorcycling for 21 great years. Total Motorcycle is my pride and joy and being able to reach out 330 million people has been incredible but I could not have done it without the support of my visitors, readers and members, thank you so much! You are making a difference to millions of riders worldwide. Thank you.
Website Facebook Instagram Twitter YouTube LinkedIn

Team Suzuki Press Office – December 19. A new updated schedule has been announced this week for the 2021 Monster Energy FIM/ AMA Supercross Championship that will see a total of 17 rounds from January […]

What do you get when you combine Fast, Fashion and Foxy Females? This week’s Inspiration Friday: Women of Speed! Women Racers are empowering our motorcycling culture, they love riding, love motorcycles and want to compete in […]

Geerts & Strijbos Put Belgium Back on the Box at MXoN

September 30, 2019 Michael Le Pard News Comments Off on Geerts & Strijbos Put Belgium Back on the Box at MXoN