Reigning MotoAmerica Superbike Champion Cameron Beaubier closed the points gap with a stellar win in race two and a runner-up finish in race one at the penultimate round at New Jersey Motorsports Park. It was a reversal of fortune for his Monster Energy Yamalube Yamaha Factory Racing teammate Garrett Gerloff, who scored a big win on Saturday, but was sidelined for race two after a crash in Sunday morning warmup.

Saturday belonged to Gerloff. The Texan was fast in both sessions and was able to secure pole position with a new lap record during a fast-paced two-day schedule. When it came time to race, it was Beaubier who took the holeshot with Gerloff right on his heels. The pair was locked in battle with the 24-year-old ultimately taking the lead on lap eight. He was able to hold off the pressure from the three-time Superbike Champion to take his fourth win in six races by 1.709 seconds. It was another great performance by the young rider and the team as a whole with another 1-2 finish for the Monster Energy Yamalube Yamaha Factory Racing Team, as well as a great day for the bLU cRU with privateer JD Beach making it a Yamaha YZF-R1 podium sweep.

Gerloff has been on a hot streak the latter half of the season. After setting a new lap record during Sunday’s morning warmup, a crash ended his day early, but expects to return to the season finale in two week’s time.

In race two, Beaubier once again got the holeshot with another Yamaha rider on his heels. A small mistake had the Californian back in second. He then laid in wait and struck back to retake the lead six laps later. The battle didn’t end there. There were a few more lead changes between the YZF-R1 riders, with Beaubier ultimately coming out on top with strength into turn one. With the championship on the line, he finished out the final eight laps in the lead and was able to build a gap to take his fourth win of the season. It was also another Yamaha podium sweep, with privateers Beach and Mathew Scholtz joining Beaubier on the podium.

Beaubier’s efforts helped his bid for the crown, cutting the gap to 16 points with 50 points still on the table going into the final round at Barber Motorsports Park on September 20-22.

“This weekend started out fantastic for us. It was full of highs and some lows, as well, but it started off incredibly well with Garrett setting a new track record, getting the pole position and winning race one. It was a Yamaha sweep on the podium, which was great. Then, unfortunately in warmup this morning, Garrett crashed after setting another lap record. Luckily, he is okay, but he was unable to race today and will be ready for Barber.

“Cameron stepped up today and took race two. It was also another Yamaha sweep, so it’s an incredible job from all the Yamaha guys today. With Cameron’s win, he is definitely in the series points fight with two races to go. We’re really looking forward to it. Again, an incredible job by Cameron, Garrett, JD Beach and Mathew Scholtz. We can’t wait for Barber.” 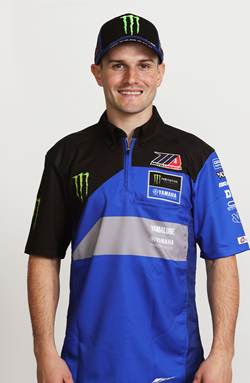 “At the beginning, I tried to make a pretty big push like I did yesterday, and I just didn’t have it. I think the track was a little hotter. For whatever reason, I wasn’t going anywhere. I was spinning up. I was like, ‘oh man. This is going to be a tough fight with JD (Beach),’ because I know how good of a racer he is. It felt so good to win this one. It’s more of a relief than anything because we’ve been kind of on the back foot all year and it feels so good every time we win. It just puts everything back into perspective. We had three Yamahas on the box both days. I think that’s a testament to how good this R1 is.

“I’m only 16 points out now, so just got to keep grinding. I’m bummed that Garrett wasn’t out there today, because he’s been on rails all weekend. It would have been another Yamaha in the mix. Bummed for him, but he’ll be back in Barber and we’ll be ready to go.”