The inclusion of wild card riders from Indonesia and the United States of America means that the Yamaha R3 bLU cRU Challenge line up for the final round of the 2019 FIM Supersport 300 World Championship in Qatar will be truly international. 17-year-old Muhammad Faerozi Toreqottullah from Indonesia and 16-year-old Dallas Daniels from America will make their World Championship debut in Qatar, as Yamaha’s bLU cRU project expands its global reach.

Faerozi Toreqottullah, a graduate of the sixth Yamaha VR46 Mastercamp in 2018, will make his World Championship debut in Qatar alongside his fellow countryman, and experienced WorldSSP300 competitor, Galang Hendra Pratama, in the Semakin Di Depan Biblion MotoXRacing Yamaha team. It will be a baptism of fire for the Indonesian, who steps up to the world stage having contested the ARRC AP250 class aboard a Yamaha Racing Indonesia Team YZF-R25 for the past two seasons.

Daniels, the first American to join Yamaha’s bLU cRU project, has a background in both road racing and flat track. The Illinois resident finished third in the MotoAmerica Junior Cup this season, despite missing six of the 17 races due to clashes with his 2019 Flat Track campaign, in which he competed for the Estenson Yamaha team in the AFT Singles category aboard a Yamaha YZF450F. Daniels will race in Qatar with the BCD Yamaha MS Racing Team, alongside Yamaha bLU cRU regulars, Andy Verdoïa and Beatriz Neila.

The WorldSSP300 race in Qatar, the final round of the 2019 season, marks a new era for the championship, as it’s the first time the series has ventured outside of Europe since its inception back in 2017. Racing at the Losail International Circuit will be a new experience for all the Yamaha bLU cRU riders, not just the two wild cards, as it will be their first experience of racing at night under floodlights. “I would like to say thank you to Yamaha for giving me a chance to race in WorldSSP300 at Qatar as a wild card, it is a really great surprise for me. I am really happy to race with Galang Hendra and the MotoXRacing Team who have a lot of experience in WorldSSP300, and I will give maximum efforts to this opportunity, Semakin Di Depan, Gasspoll.” 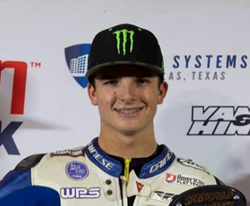 “I’m thrilled that Tommy and Keith put this deal together for me. I still want to do as much road racing as I can, and to race in the World Supersport 300 Championship is going to be great. Everything on the bike will be prepped and ready to go. They’ll have a crew in place, so I just need to show up and ride. I can’t wait.”

“We are excited that Muhammad Faerozi Toreqottullah and Dallas Daniels will join Yamaha’s bLU cRU project for the final round of the FIM Supersport 300 World Championship in Qatar. Our bLU cRU project has gone from strength to strength in recent years, providing a path for young, talented riders stepping up to the world stage from their respective national championships. Initially designed primarily to support European riders, the bLU cRU project now has an increasingly global reach, thanks to the strategic support of the Yamaha Motor Corporation Motorsport Division. Indonesian rider Galang Hendra Pratama, a two-time race winner in WorldSSP300, has raced for two seasons on the world stage as a bLU cRU rider and his progress has prompted interest in the project from around the world. Galang will race in Qatar alongside his compatriot, Faerozi Toreqottullah, thus strengthening the links between our bLU cRU project and South East Asia. Equally exciting is the fact that Dallas Daniels will be the first American to race on the world stage as a bLU cRU rider, which illustrates how the project has matured into a truly global platform. I look forward to welcoming our two wild card riders into the bLU cRU family and I wish them every success as they make

About Michael Le Pard 4018 Articles
"Mr. Totalmotorcycle". Owner and Founder of Total Motorcycle. Supporting over Motorcyclists and Motorcycling for 21 great years. Total Motorcycle is my pride and joy and being able to reach out 330 million people has been incredible but I could not have done it without the support of my visitors, readers and members, thank you so much! You are making a difference to millions of riders worldwide. Thank you.
Website Facebook Instagram Twitter YouTube LinkedIn

Assen. Saturday’s Assen (NED) action was shorter than expected for the FIM Superbike World Championship (WorldSBK) and the BMW Motorrad WorldSBK Team. The afternoon’s opening race was cancelled due to snow. In the morning’s Superpole […]

PETRONAS Yamaha Sepang Racing Team duo Fabio Quartararo and Franco Morbidelli made a flying start at the Grand Prix of Japan, finishing the day first and sixth on the timesheets at the Twin Ring Motegi. […]