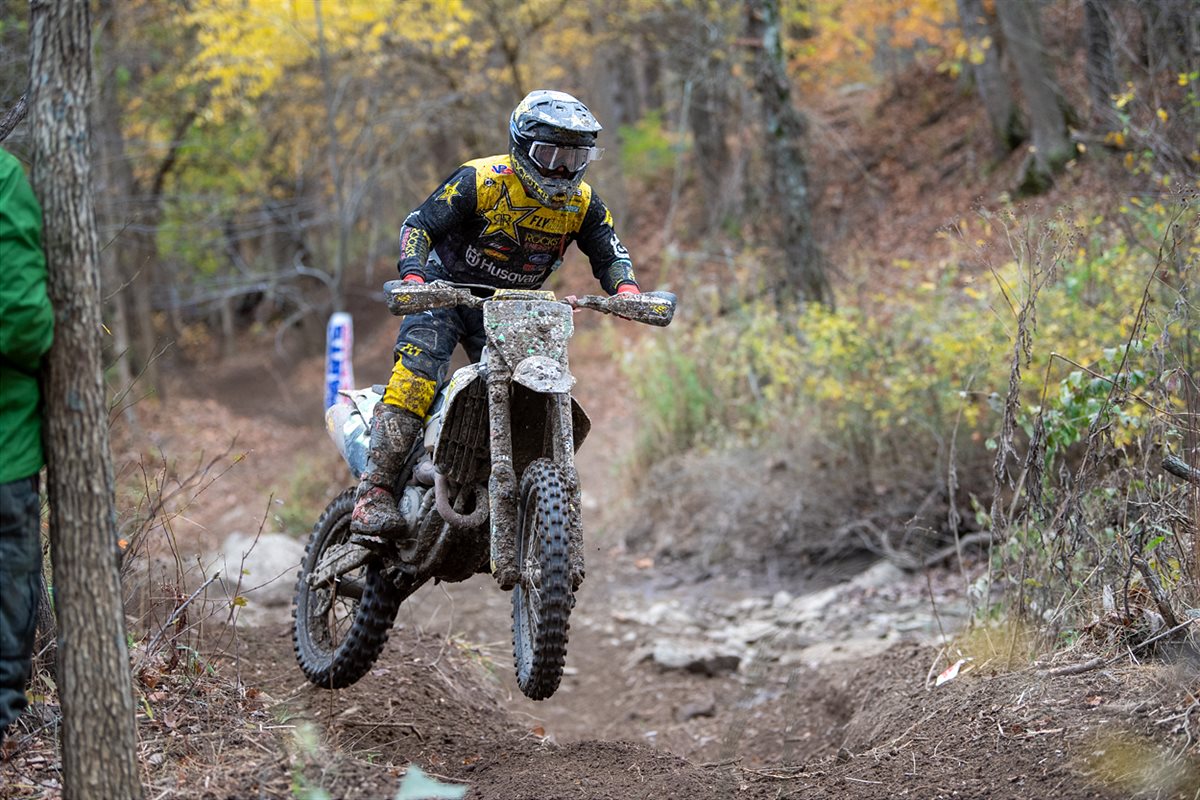 Rockstar Energy Husqvarna Factory Racing’s Craig DeLong has reclaimed the XC2 250 Pro Championship points lead following a big victory at Sunday’s penultimate round of the 2020 AMA Grand National Cross Country (GNCC) Series in Crawfordsville, Indiana. With one round remaining, DeLong now holds an 11-point advantage in the highly-contested title fight.
It’s been a season-long battle for the XC2 Championship and DeLong is making every race count as he now holds four race-wins and a consistent string of podium finishes throughout the first 12 rounds. With a top-five start in the XC2 250 Pro class on Sunday, DeLong had his work cut out from the start of the three-hour race. Dry conditions made for a fast-paced course layout and DeLong found out the hard way that it wasn’t going to be easy to make passes on the top riders so he put his head down and chipped away to ultimately bring himself within contention of the lead heading into the final hour of racing. From fifth to first, DeLong commanded the lead with two laps to go and he never looked back as he made his way through the checkers to claim victory by almost seven seconds ahead of the second-place rider.
“It was a wild day,” DeLong said. “I was fifth for ¾ of the race and then with an hour to go, I made it happen. It was an all-out sprint all day and the guys were riding awesome, it’s tough to make up time so you had to block everything out and just go for it. I’m definitely happy to get it done, it’s a lot of pressure but it feels good and now I just need to go out and do it all over again next weekend.”
XC1 Open Pro
Rockstar Energy Husqvarna Factory Racing’s Thad DuVall lined up for his second-straight GNCC since returning from injury and he came out swinging to capture the holeshot in the XC1 Open Pro class. He made a mistake that dropped him back early on and he rounded the first lap in seventh-place. He quickly moved into a top-five position by the second lap and he began charging his way through the pack and into podium contention just after the halfway mark. However, DuVall had a big crash heading into the second half of the race and from there he eased his way into the finish, ultimately taking ninth in XC1 for the day.
“I got the holeshot and was riding really good but I made a mistake on the first lap and dropped back a little bit,” DuVall said. “I put on a pretty good charge with Kailub up to third and we started to run the guys down up front but I had a big crash and kind of slowed myself down a little bit. After that, I just kind of put it on cruise control to make sure I was okay. We’ll regroup and head to the last GNCC ready to go.”
Next Event: Round 13 – Buckwheat GNCC – November 8, 2020
Ironman GNCC Results
XC1 Open Pro Class Results
1. Josh Strang (KAW)
2. Steward Baylor Jr. (YAM)
3. Ben Kelley (KTM)
…
9. Thad DuVall – Rockstar Energy Husqvarna Factory Racing Team
XC2 250 Pro Class Results
1. Craig DeLong – Rockstar Energy Husqvarna Factory Racing Team
2. Lyndon Snodgrass (KAW)
3. Mike Witkowski (YAM)
XC2 250 Pro Championship Standings
1. Craig DeLong, Rockstar Energy Husqvarna Factory Racing Team – 296 points
2. Mike Witkowski – 285 points
3. Jonathan Girroir – 280 points
About Michael Le Pard 5059 Articles
"Mr. Totalmotorcycle". Owner and Founder of Total Motorcycle. Supporting over Motorcyclists and Motorcycling for 21 great years. Total Motorcycle is my pride and joy and being able to reach out 330 million people has been incredible but I could not have done it without the support of my visitors, readers and members, thank you so much! You are making a difference to millions of riders worldwide. Thank you.
Website Facebook Instagram Twitter YouTube LinkedIn

The Mission Winnow Ducati team concluded tonight the official MotoGP pre-season tests at Losail (Qatar). In the three-day test, which is crucial to define the technical base ahead of the opening round of the Championship, […]

Dylan Ferrandis put his Monster Energy Star Yamaha Racing Team on top for the second consecutive round, winning the overall at Unadilla in New Berlin, New York. The 10th round of the Pro Motocross series […]

AMAZING JAMBOREE WITH IANNONE AND RINS IN INDONESIA

February 5, 2018 Michael Le Pard News Comments Off on AMAZING JAMBOREE WITH IANNONE AND RINS IN INDONESIA