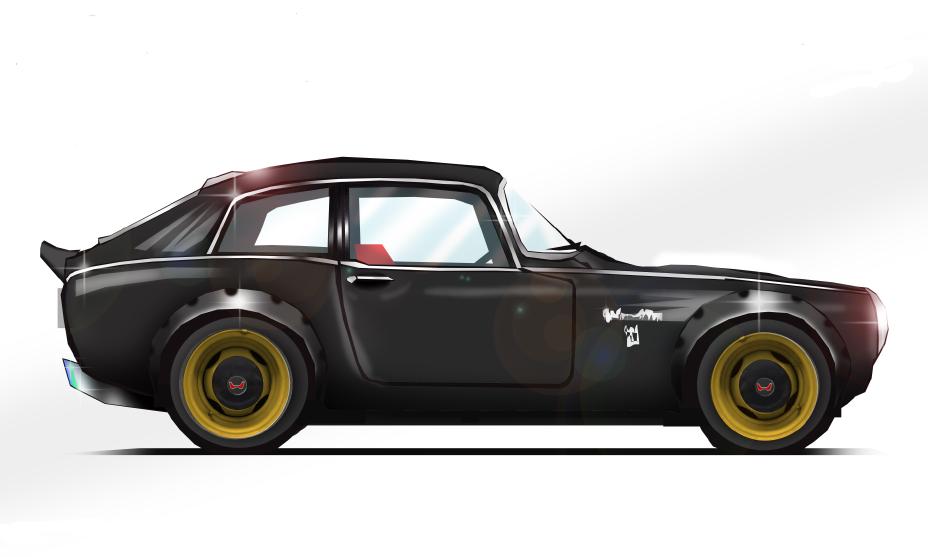 The Honda exhibit at the 2019 SEMA Show will celebrate the company’s 60th anniversary in the U.S., Honda’s longstanding commitment to the enthusiast community, and the accessorization opportunities of Honda’s line-up today—helping light the way for owners to indulge their personalities and lifestyles. At center stage is a pair of 2020 Honda CR-Vs – refreshed gasoline variant and all-new hybrid – accessorized for outdoor enthusiasts. Alongside the adventure CR-Vs is a 2019 Honda Passport fresh from the American Rally Association circuit, a Honda Ridgeline pickup featuring Honda Factory Performance (HFP) concept accessories, and an accessorized Honda Talon 1000R side-by-side.

Paying tribute to American Honda’s 60th anniversary is a faithful replica of the red-and-white Chevy Apache pickup used by Honda motorcycle salespeople in the early 1960s, alongside a 1968 Honda S800 Coupe “Outlaw” sports car, a modified version of one of Honda’s very first production cars. Also featured will be a Civic Si heavily modified for competition in Formula Drift, two Super Street Civic Si project cars from 1999 and today, and the winner of this year’s Honda Super Tuner Legends Series, a component of the annual Hot Wheels™ Legends Tour competition – a 1972 Honda N600 with its rear wheels driven by the engine from a Honda VFR motorcycle.

2020 Honda CR-V Hybrid “Do” Build by Jsport Performance Accessories
This 2020 CR-V Hybrid “Do” build was created by Jsport with the “weekend warrior” in mind, someone who needs a versatile vehicle that will transport him or her to the nearest trailhead, while retaining the everyday practicality that the CR-V provides. Modifications include a 1.5-inch lift kit, side steps, and roof basket from Jsport, 17-inch KMC off-road wheels with Nitto Terra Grappler all-terrain tires, and a Cannondale mountain bike mounted to the roof basket. 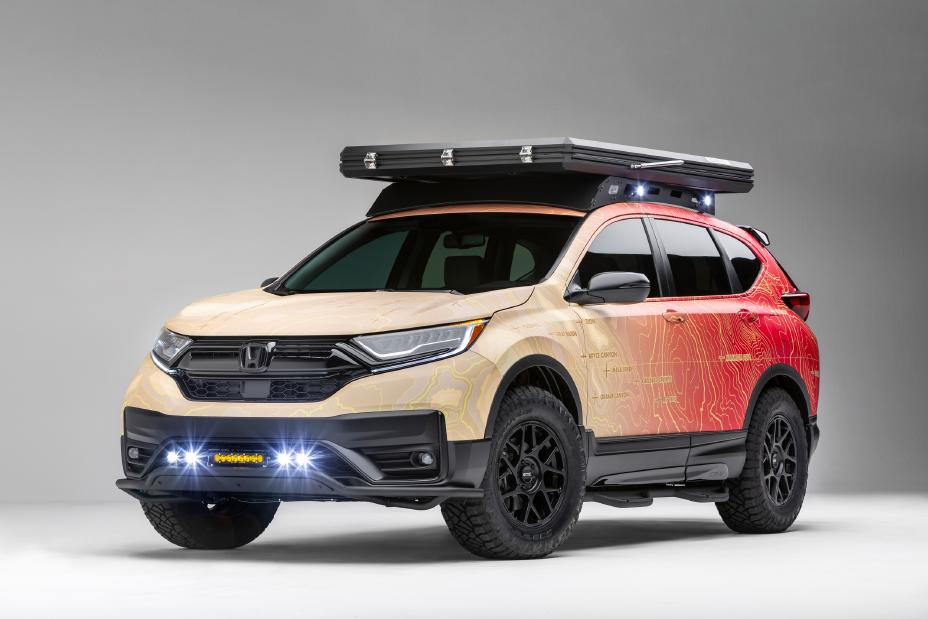 2020 CR-V “Dream” Build by Jsport Performance Accessories
This gas-engine 2020 CR-V “Dream” build was designed for the “overlander” type – someone who wants to venture past the trailhead and explore the outdoors with a vehicle equipped with the gear to support self-reliant adventure travel. Modifications to the CR-V for overlanding include a 1.5-inch lift kit, side steps, front bumper, rear tire gate, and Plateau modular roof rack from Jsport, 17-inch KMC off-road wheels with Nitto Ridge Grappler all-terrain tires, and a Roofnest Falcon clamshell-style rooftop tent. The cargo area has been upfitted with an organization cabinet and a slide-out refrigerator.

Ridgeline HFP Concept with Lifestyle Accessories
Well-known for its accessories and performance parts for sport compact models, Honda Factory Performance (HFP) explores the possibility of expanding its offerings to more rugged lifestyle vehicles with the Ridgeline HFP Concept. The truck is lifted and the track widened for a rugged stance, with all-terrain tires mounted on concept 18-inch bronze-finish HFP alloy wheels, and various currently available Honda Genuine Accessories. In the bed is a pair of custom Fuji mountain bikes painted in the same color as the Ridgeline, mounted using Thule bed bike fork mounts. Additional accessories from Thule include an Xsporster bed rack and Kukenam 3 tent in Siberian Camo.

Rally Passport
The Rally Passport was built by Honda R&D associates in Ohio as a private, after-hours project to showcase the performance potential and help elevate the off-road capability of the all-new 2019 Passport. The Rally Passport was built to compete in stage rally competition in the Limited 4WD class of the American Rally Association. The vehicle in its first event placed 2nd in class and 12th overall out of 75 total competitors in the Southern Ohio Forest Rally. Modifications were mostly for the sake of race safety and included a roll cage and safety equipment per ARA regulations, Maxxis RAZR MT Tires on Braid Wheels, Carbotech brake pads, skid plates in the front and rear, and a hand-operated hydraulic brake. 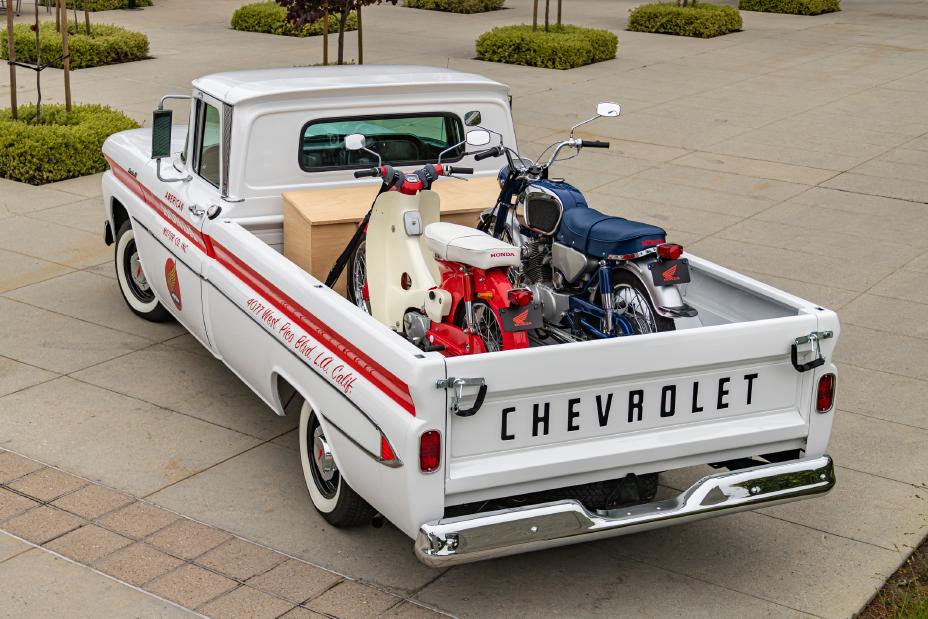 Heritage Chevy Truck with Vintage Cub and CB160
The 1961 Chevrolet half-ton pickup on display is a faithful reproduction of one of the delivery trucks used by American Honda Motor Co., Inc. (AHM) shortly after first opening for business in 1959. Modeled after the one used in an iconic photo circa 1961 in front of AHM’s original office in Los Angeles, the truck features hand-painted lettering and period-correct trim. Additionally, the truck’s cargo reflects two important motorcycles from those early days, helping recreate what the package looked like as salespeople traveled around the state to support their dealers. The 1965 Honda 50 helped put Honda on the map in the early 1960s, thanks to its low price and easy-to-ride nature that put it within reach of anyone. The 1965 Honda CB160 was one of Honda’s early small displacement sport bikes, itself a big hit for AHM, following in the footsteps of the larger CB77 “Super Hawk” in moving away from a stamped steel monocoque in favor of a tubular steel frame.

1968 Honda S800 Coupe “Outlaw”
The custom 1968 Honda S800 Coupe “Outlaw” built by producer and actor Daniel Wu is based on an original S800, one of the very first production cars Honda ever made. While Wu had contemplated an engine swap, instead he had the original stock engine completely rebuilt to new condition and added a custom exhaust system made by GReddy, with the exhaust pipes exiting the middle of the vehicle. The custom body kit was made by Pandem’s Kei Miura to give the S800 a more aggressive look with custom flares, a custom air dam, and a suspension that’s 2 inches lower than stock. The fender flares broaden the stance by about 4 inches, supported by widened stock steel wheels wrapped in Toyo R888R tires. A custom interior contrasts against the exterior, with red leather seating and the original S800 steering wheel also accented in red leather.

Honda Tuning 2018 Civic Si Project by Super Street Magazine
The Honda Tuning Civic Si project was designed to test multiple off-the-shelf aftermarket products in order to establish just how much tuning potential the 10th-generation Civic offers. Super Street editors addressed areas that the average enthusiast would, with the goal of all modifications being 100-percent reversible. Modifications to the Si powertrain included an intake and intercooler kit, an ECU re-flash, complete front-to-rear exhaust system and a complete turbo kit with a new downpipe. Interior modifications include lower-positioned seats with more pronounced thigh and side bolsters, an adjustable length and height shifter, and adjustable gas pedal spacer.

About Honda
Honda marked its 60th anniversary in America in June 2019, and 40 years of production in America in Sept. 2019. Honda established its first U.S. business operation in Los Angeles in 1959. Today, Honda employs more than 31,000 associates in the development, manufacturing, sales and servicing of Honda and Acura automobiles, Honda power equipment and powersports products, the HondaJet advanced light jet and GE Honda HF120 turbofan engines.

Honda offers a full line of reliable, fuel-efficient and fun-to-drive vehicles with advanced safety technologies sold through over 1,000 independent U.S. Honda dealers. The Honda lineup includes the Fit, Civic, Insight, Accord and Clarity series passenger cars, along with the HR-V, CR-V, Passport and Pilot sport utility vehicles, the Ridgeline pickup and the Odyssey minivan.

Honda has been producing automobiles in America for more than 35 years and currently operates 19 major manufacturing facilities in North America. In 2018, more than 90 percent of all Honda brand vehicles sold in the U.S. were made in North America, using domestic and globally sourced parts.

Sepang. The next challenge in the FIM Endurance World Championship awaits the BMW Motorrad World Endurance Team and the new #37 BMW S 1000 RR in the form of the 8 Hours of Sepang (MAS) […]

Munich. The appeal of the current model range and the progressive character of the latest technological innovations by BMW were also confirmed in the course of 2019 by a large number of coveted awards. The […]