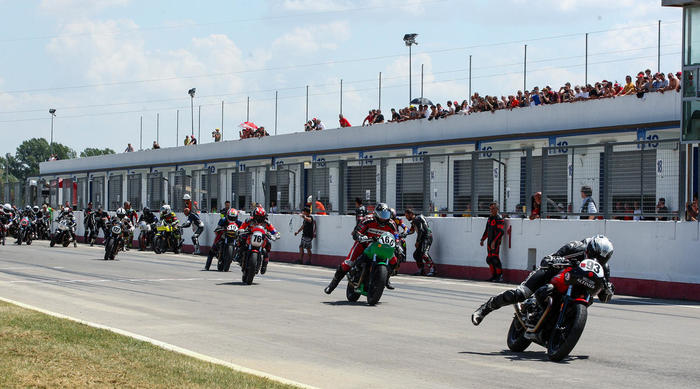 Magione (Perugia), 23 June 2019 – The Moto Guzzi Fast Endurance Trophy made for another exciting weekend of racing at the Autodromo dell’Umbria, in Magione, the stage for round three of the single brand series organised by the FMI and Moto Guzzi and dedicated to Moto Guzzi V7 III bikes equipped with the GCorse Racing Kit and Pirelli Phantom Sportscomp RS tyres.

The podium is rounded out Team Circuito Internazionale d’Abruzzo and the Baroni-Valenza pairing, in third following a fantastic recovery

Next round to take place at Adria on 1 september

A championship that is becoming increasingly enjoyable and exciting, fun for all the riders involved, from the novices to the most experienced and shrewd gentleman riders. The hour-long “mini-endurance” race saw Team Biker’s Island take the win, their first victory of the season and the third different winner in three races. Having scored pole position at the end of Saturday’s timed practice, Samuele Sardi and Oreste Zaccarelli powered their Mandello 750 cc across the line in first place at the end of an error-free race, cleverly managing their advantage over Team Circuito Internazionale d’Abruzzo, even during the rider changeovers in pit lane.

Coming home in second place, having also set the fastest lap of the race (1’24”547), Team Circuito Internazionale d’Abruzzo was the only team that tried to hinder Sardi and Zaccarelli, while the fight for the third step of the rostrum became a three-way battle between Guaracing Factory Team (Rubini-Rizzardi), Team ChiMoto (Tosolini-Santi) and the team comprising Lorenzo Baroni and Domenico Valenza, lining up as special guests at this event. It was the last of the three who ultimately won the fight, recovering from eighth to third place, a result scored thanks to a great pass just a few seconds before the 60-minute race came to an end. A recovery that also saw them secure the prize for the team that makes up most positions from start to finish. 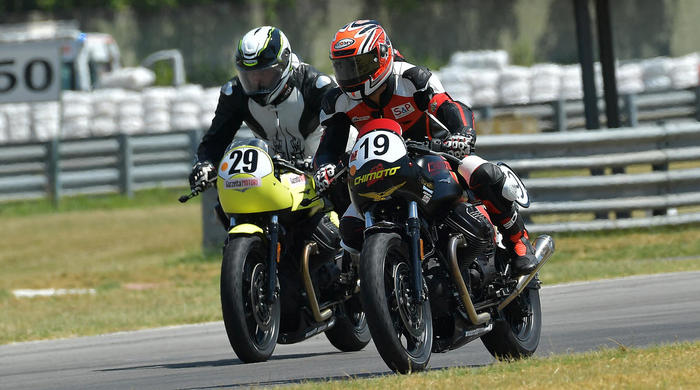 Another team that stood out for its extraordinary recovery was the Virgin Radio squad comprising DJ Ringo and Paolo Rovelli, with only a misunderstanding at the line preventing them from being officially classified tenth, having been in last place (eighteenth) just one lap into the race.

The V7 III bikes of The Clan team were ridden by Alessandro Cimaroli and Antonio Paparo, riders voted for online by the official Moto Guzzi community. Twelfth across the line, they, like everyone else, were able to experience a passion-fuelled weekend that was all about friendship, both on track and in the paddock, in true “guzzista” style.

The Moto Guzzi V7 III equipped with the GCorse racing kit once again impressed at Magione, proving that it is fun to ride, fast, easy to handle and suitable for everyone, as proved by the fact that all 18 starters were able to finish the race.

A format for all: classic atmosphere, young spirit

The brand new format of the Moto Guzzi Fast Endurance Trophy is perfect for everyone to have fun, from track novices to the most seasoned enthusiast. Every race weekend includes two timed practice sessions on Saturday, 20 minutes long each for every rider. The average of the best times achieved by the two riders on the team will determine the starting position of each team on the grid for the Sunday race. A clear throwback to the legendary endurance races of old is represented by the race start, which takes place in “Le Mans” style, in other words, with the bikes lined up on one side of the track and the riders having to cross the asphalt at the start to jump in the saddle and begin the race.

In the race, each rider will ride for a maximum of 15 minutes + 2 consecutive laps. This means that the race – which lasts 60 minutes – will include at least three rider changes, made in pit lane. At the end of the race, points are awarded to the top 15 teams.

The next events are scheduled to take place at the tracks of Adria (1 September) and Misano (13 October). It is possible to register for individual Trophy races up to two weeks before the race in question.

To stay updated about everything relating to the 2019 Moto Guzzi Fast Endurance trophy, consult the Trophy web pages, fastendurance.motoguzzi.com, and the Italian Motorcycling Federation website, www.federmoto.it.

November 11, 2020 Michael Le Pard News Comments Off on Ducati Team returns to Valencia for the penultimate Grand Prix of the 2020 MotoGP season

The MotoGP World Championship returns to action for the second consecutive time at the Ricardo Tormo Circuit in Cheste (Spain), which, after hosting the European GP last Sunday, will set the stage also for the […]

Touring in the Batmobile: The Slingshot Effect

Our very first weekend with the 2020 Polaris Slingshot R, we went touring in the Batmobile! It was starting to get cold up north, so we headed into southern Utah for a trip along picturesque […]