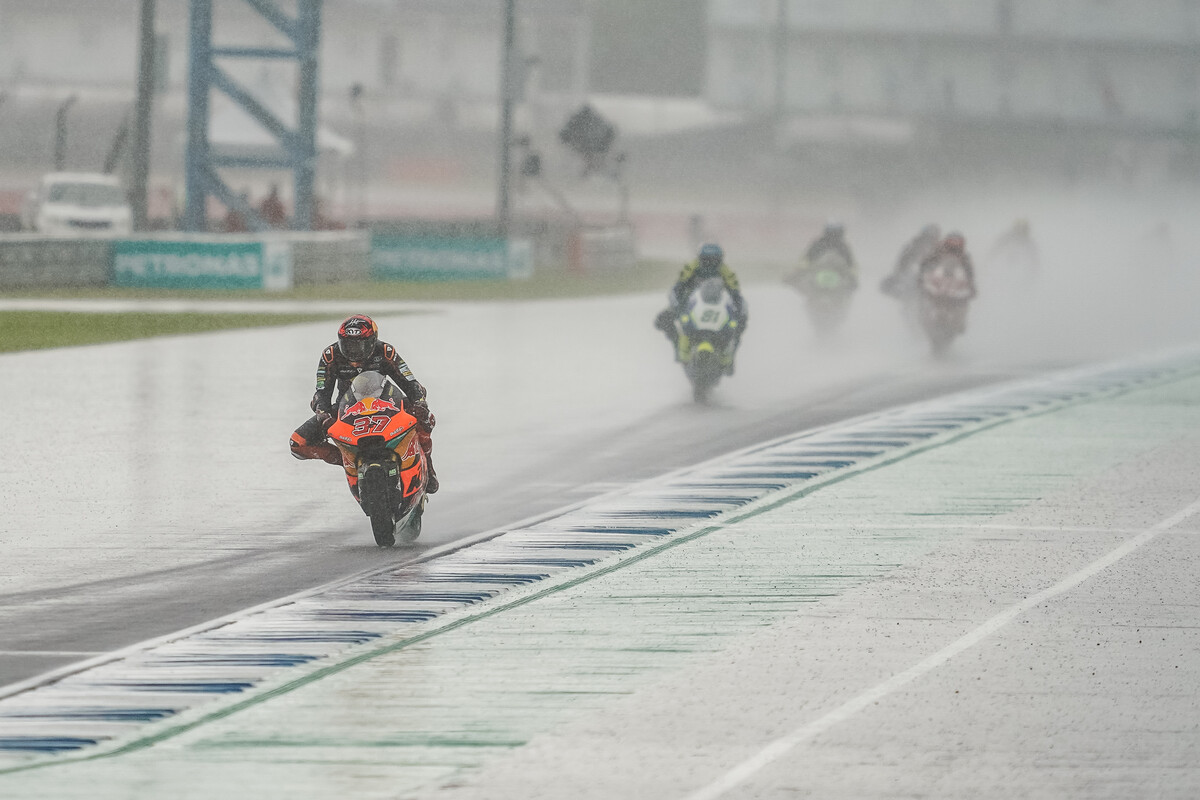 Round seventeen of MotoGP meant the third consecutive weekend of racing in 2022 MotoGP™ and a return to the hot and humid conditions surrounding the Chang International Circuit in Buriram for the OR Thailand Grand Prix. Red Bull KTM Ajo’s Augusto Fernandez is still fronting the Moto2 world championship after the rain-halted affair.

Moto3
The Moto3 Grand Prix consisted of 22 laps and was the first sprint on the program in Thailand. Six KTM RC4s were located in the top ten on the start grid with Red Bull KTM Ajo’s Jaume Masia placed 2nd and in the middle of the first row.
As the race developed the two front-running groups were formed by more than ten riders and Masia, along with teammate Daniel Holgado were in contention for the top five as the distance wore heavy on tires and energy levels. Masia ran wide several times but was able to guide his motorcycle to 8th position, three spots ahead of Holgado who was competing at Chang for the first time.
Red Bull KTM Tech3’s Deniz Öncü was fighting hard in the second group but suffered a setback with two Long Lap penalties for infringing track limits. The Turk, who was still in discomfort after his crash in Japan the previous week, finally took 17th. Adrian Fernandez crashed at Turn12 on the first lap while the leading KTM RC4 rider was Stefano Nepa in 4th.
Masia and Öncü are 5th and 6th in the championship standings.
Moto2
Red Bull KTM Ajo were again among the protagonists in the intermediate class but on Sunday the race was interrupted and eventually halted. Torrential rain battered the venue just as the grid was getting ready to depart. The race was stopped with less than two-thirds distance covered and the field had to wait for the worst of the weather to pass. However more rainfall meant the five-lap restart was cancelled and half points were awarded for the positions; Augusto Fernandez classified 7th and Pedro Acosta was 16th.
With three rounds and a maximum of 75 points left this season with Grands Prix at Phillip Island, Sepang International Circuit and the Circuito Ricardo Tormo, Fernandez is 1.5 points ahead of Ai Ogura. The Animoca Brands Australian Grand Prix will bring the paddock together again in two weeks time.
Results Moto3 OR Thailand Grand Prix
1. Dennis Foggia (ITA), Honda 37:52.331
2. Ayumu Sasaki, (JPN), Husqvarna +1.524
3. Riccardo Rossi (ITA), Honda +2.804
4. Stefano Nepa (ITA), KTM +9.414
5. Izan Guevara (ESP), GASGAS +9.527
8. Jaume Masia (ESP) Red Bull KTM Ajo +10.033
11. Daniel Holgado (ESP) Red Bull KTM Ajo +14.571
17. Deniz Öncü, (TUR), Red Bull KTM Tech3 +24.055
DNF. Adrian Fernandez (ESP) Red Bull KTM Ajo
Results Moto2 OR Thailand Grand Prix
1. Tony Arbolino (ITA) 15:10.854
2. Filip Salac (CZE) +0.251
3. Aron Canet (ESP) +3.112
7. Augusto Fernandez (ESP) Red Bull KTM Ajo +9.862
16. Pedro Acosta (ESP) Red Bull KTM Ajo +14.520
About Michael Le Pard 8443 Articles
"Mr. Totalmotorcycle". Owner and Founder of Total Motorcycle. Supporting over Motorcyclists and Motorcycling for 23 great years. Total Motorcycle is my pride and joy and being able to reach out 375 million people has been incredible but I could not have done it without the support of my visitors, readers and members, thank you so much! You are making a difference to millions of riders worldwide. Thank you.
Website Facebook Instagram Twitter YouTube LinkedIn

Beta USA is proud to announce their 2021 RR Race Edition models that now include the popular 200 model to the lineup! With a full eight model lineup, (4) two stroke and (4) four stroke […]