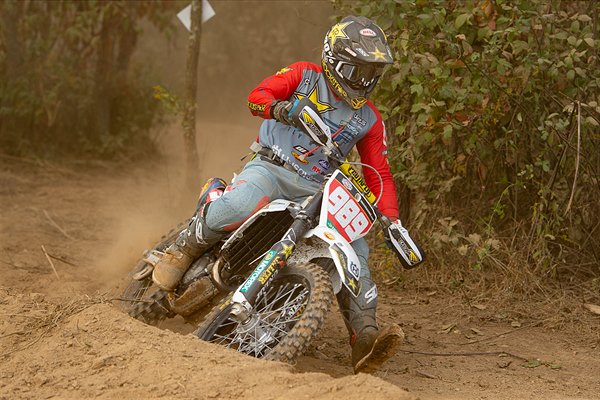 Rockstar Energy Factory Racing Team’s Thad DuVall won the Mason-Dixon GNCC for the second-straight year on Sunday after battling through tough conditions at Round 11 of the Grand National Cross Country (GNCC) Series. His teammate Trevor Bollinger rounded out the podium with an impressive third-place finish in only his second race back from illness.
Held in Mount Morris, Pennsylvania, the Mason-Dixon GNCC presented some of the most grueling race conditions of the season with dry and dusty silt infiltrating every crevice of the motorcycles. The Rockstar Energy Factory Racing Team was prepared and ready to go as both riders not only survived, but they excelled in the challenging conditions.
DuVall got off to a fourth-place start and worked his way into third by lap two. He worked on chipping away at the gap to second-place and with two laps to go he powered his way into the lead. As some of the other top riders began experiencing bike issues late in the race, DuVall capitalized and continued to build upon his lead even after a quick stop in the pits to change the air filter. After six laps, DuVall crossed the finish line almost 40 seconds ahead of the next rider to claim his fourth win of the season.
Thad DuVall: “My mechanic Tanner did an awesome job putting a new filter on. I didn’t even really want to stop because I felt like my bike was running pretty well but I knew I had a comfortable lead at the end. It was easy to make a big mistake out there, so we cruised it in on the last lap, played it safe and I’m happy to bring it home in front of my hometown fans.”
Bollinger got off to a sixth-place start and he worked his way into the top-five by lap two. He continued to work his way through the pack, where he reached the podium battle with two laps to go. Once again, as the top riders began experiencing issues, Bollinger only got stronger as he made his way into third on lap five. He continued to charge on the final lap to ultimately finish only 30 seconds back for third overall.
Trevor Bollinger: “I’ve been struggling the past few months with an illness and it’s one of those things you can’t prevent, it’s just part of life. But I’m finally feeling close to myself. I got a little break today with some of those guys breaking down but you had to be smart and stay out of the dust. We just kept fighting all day and luckily it ended with us on the podium.”
Mason-Dixon GNCC Results
XC1 Open Pro Class
1. Thad DuVall (HQV)
2. Ricky Russell (YAM)
3. Trevor Bollinger (HQV)
Overall Championship Standings
1. Kailub Russell, 295 points
2. Thad DuVall, 258 points (4 wins)
3. Steward Baylor Jr., 198 points
4. Ben Kelley, 166 points

Team Suzuki Press Office – December 18. Suzuki team-mates Daniel Mettam and Scott Moir went head-to-head in pursuit of Formula One class glory at the second round of three in the 2017 Suzuki Series in […]

MOSIMAN 8TH, ANDERSON 9TH AT ANGEL STADIUM The Rockstar Energy Husqvarna Factory Racing Team lined up at Angel Stadium in Anaheim on Saturday for the second time this year for the Anaheim 2 Supercross, the […]