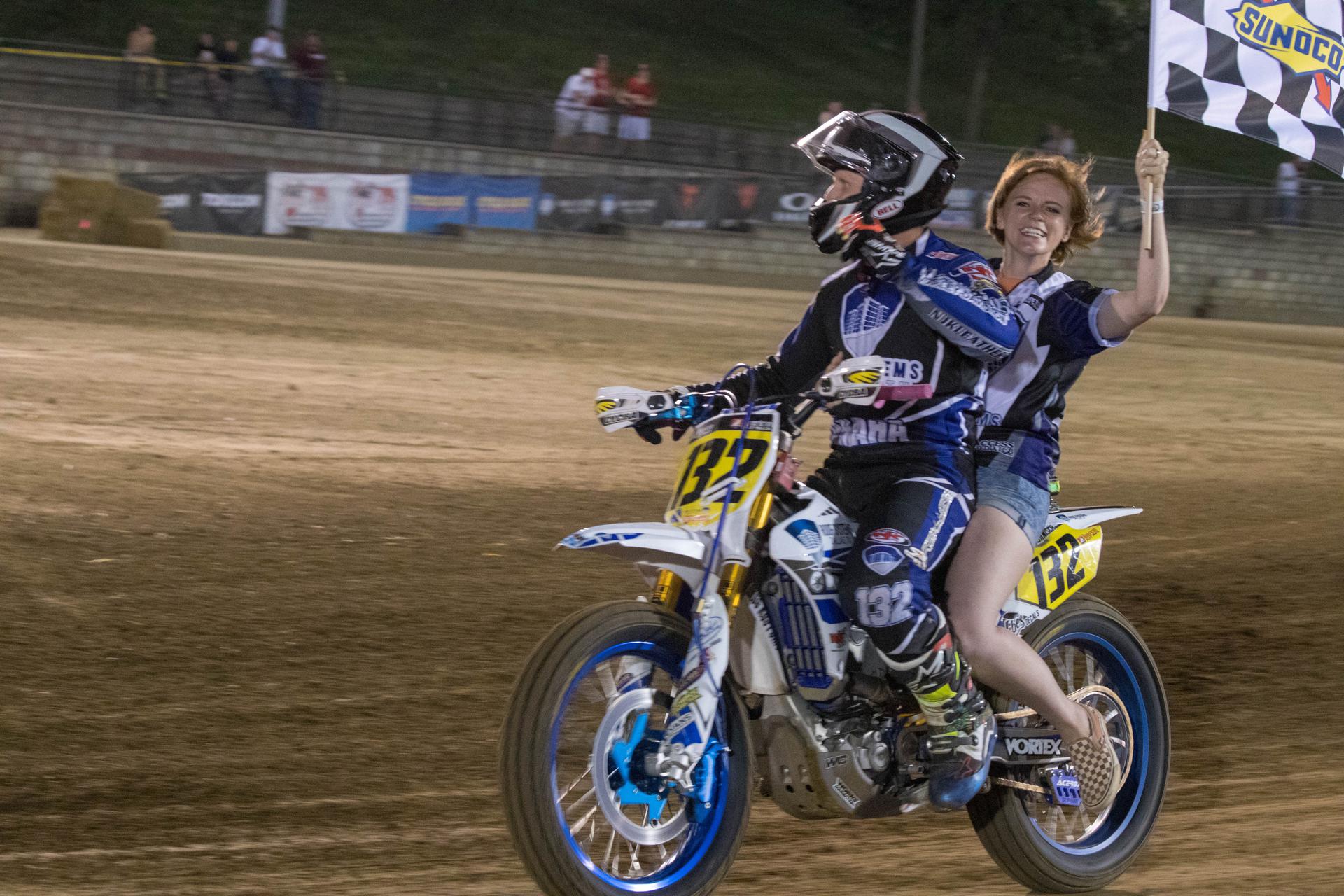 Janisch appeared to be facing an uphill climb to keep his perfect 2019 TT win streak alive heading into the 15-lap Main Event at the Illinois State Fairgrounds due to the impressive pace of scrub-jumping two-wheeled legend Ryan Sipes (No. 264 Red Bull/Leatt/KTM 450 SX-F).

And in fact, Sipes stole the holeshot from pole and threatened to pull an immediate gap. However, the ISDE superstar threw away a likely victory on lap 3, allowing the rear end to get around on him mid-corner and he fell to the dirt.

Janisch gladly picked up the reins and registered a series of flawless laps at the front. The result wasn’t without any addition drama through, as a hard-charging Mikey Rush (No. 15 RMR Honda/Red Riders Rewards Honda CRF450R) kept him honest all the way to the checkered flag.

Earlier, Rush worked overtime to find a way past last year’s Springfield TT winner (and reigning class champ) Dan Bromley (No. 1 Red Bull KTM Factory Racing 450 SX-F). Once through, he slashed into Janisch’s advantage but failed to get close enough for even a Hail Mary attempt on the final lap.

The win was Janisch’s third in three TTs this season and his fourth TT win in a row dating back to last year’s Peoria TT.

His big night was made even more monumental due to the misfortune of title rival Dalton Gauthier(No. 122 D&D Cycles/Gobert Smash Husqvarna FC450). Gauthier entered the event as the AFT Singles’ points leader, but was unable to advance past the heat races after being assessed a 10-second penalty for twice jumping the start. As a result, Janisch now leads Gauthier 111-96 following 6 of 18 rounds. Additionally, Rush and Bromley have also moved into striking distance with 91 and 90 points, respectively.

“Getting the win was absolutely awesome,” Janisch said. “It was unfortunate for Ryan, I think he definitely had some speed on us today, but I’m certainly going to take it. The Roof Systems of Dallas, Texas team has been awesome this year; I think my results speak volume for how great the team has been and how much they’ve propelled me forward.”

Runner-up Rush said, “I had a fun time doing that race, but I wish it was a few laps longer, for sure. It took my awhile to get by Dan. We had a nice, clean race. When I got by him, I put my head down and tried to put in smooth laps and hit my marks. I realized I was catching (Janisch), but I knew I was going to run out of laps. But I kept charging and charging. My team works their tails off for me. I’ll continue to keep chipping forward, and hopefully I’ll get that win soon.”

Third-place Bromley said, “I was over-riding a little bit. I tried pushing in the corners and got on the gas a little too soon and it would upset the bike a little bit and I’d pretty much lose my drives. Jesse and Mikey rode one heck of a race.”

2016 class champ Ryan Wells (No. 94 Estenson Racing Yamaha YZ450F) fought his way back from an early crash to finish 11th, one position ahead of Sipes.

Be sure to catch the feature broadcast of the Springfield TT on NBCSN with flag-to-flag coverage of the Main Event, enhanced by exclusive features and cutting-edge aerial drone and onboard footage. The broadcast will debut on Saturday, June 1, at 2:30 p.m. ET/11:30 a.m. PT and will re-air on Tuesday, June 4, at 4:00 p.m. ET/1:00 p.m. PT.

About Michael Le Pard 4729 Articles
"Mr. Totalmotorcycle". Owner and Founder of Total Motorcycle. Supporting over Motorcyclists and Motorcycling for 21 great years. Total Motorcycle is my pride and joy and being able to reach out 330 million people has been incredible but I could not have done it without the support of my visitors, readers and members, thank you so much! You are making a difference to millions of riders worldwide. Thank you.
Website Facebook Instagram Twitter YouTube LinkedIn