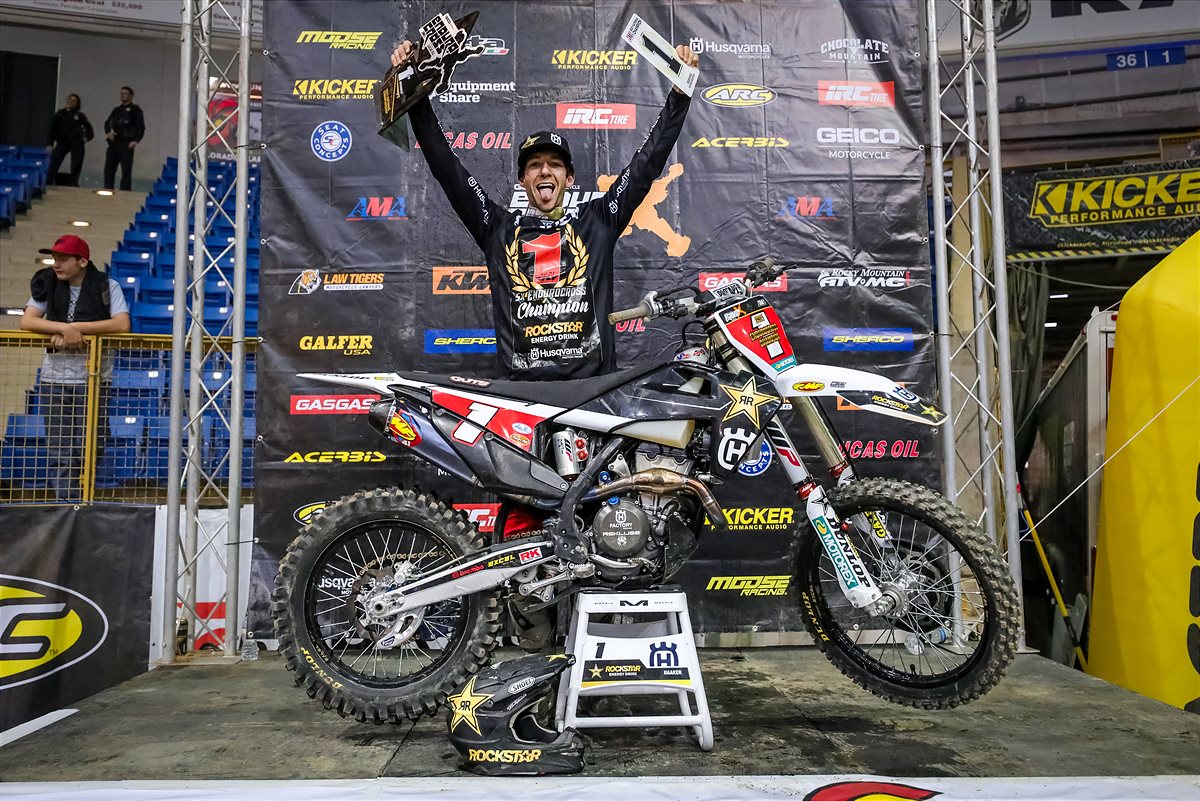 Rockstar Energy Husqvarna Factory Racing’s Colton Haaker secured the 2021 AMA EnduroCross Championship at the season finale double-header in Denver, Colorado. Wrapping up the title with second overall at Friday’s penultimate round, Haaker went on to secure a strong second-place finish on Saturday to conclude the 2021 series on a high note with his fifth-career title together with Husqvarna Motorcycles.
Haaker eased his way into the first moto of the night, settling into the second-place spot right away on the opening lap. He made a charge towards the leader but a couple mistakes held him back from contesting the lead and he finished second. In race two, Haaker got a top-five start and broke into the lead halfway through the race, finishing strong with the win. He had a great start in race three, making his way to the front early on. He ended up getting passed late in the race but he maintained his position to ultimately finish second, which was enough for him to wrap up the title with one round remaining on Saturday.
“I didn’t feel amazing on Friday night but I knew we just needed to grit it out and get the job done,” Haaker said. “I made a couple mistakes that cost me the overall win but we were still able to bring home the title, which was the ultimate goal. This makes it five titles with Husqvarna Motorcycles, eight total with world supers, so I’m just looking to go down as the greatest!”
With the title wrapped up, Haaker came into Saturday’s finale with no strings attached and he still showed up in top form to claim pole position with a near-perfect laptime in hot laps. The newly crowned champ got the holeshot in the first moto and immediately gapped the rest of the field until he got caught up in lapped traffic and found himself stuck on the tire uphill. Dropping to fourth, he battled through a couple more crashes to ultimately finish fourth. In race two, Haaker got stuck in a first-turn pileup and found himself back in dead last on the opening lap. He quickly made his way into second and applied pressure on the leader but wasn’t able to make a pass stick before the checkers, finishing second. In race three, he grabbed a top-three start and battled in a freight-train on the opening lap. He was able to avoid some carnage on the second lap to overtake the lead, where he finished the night off strong with a race-victory in the final bout of the season.
Haaker added, “I felt like I was riding really well but it was not going the way I would have liked, so we salvaged what we could. That’s EnduroCross, it’s hard to stay perfect and clean, and if it wasn’t so unpredictable, the sport wouldn’t be that fun to watch. I put it together in the last race and secured the win, which was a nice way to end the season.”
Finishing all six rounds inside the top-two, Haaker came away with three overall wins and three second-place finishes on the season. Earning his fifth career-title, he now sits tied with Taddy Blazusiak for the most championships in the EnduroCross Series.
Timmy Weigand – Rockstar Energy Husqvarna Factory Racing Team Manager: “I’m excited to see Colton’s hard work and dedication to his craft continue to pay off with his fifth-career title this season. He is a special rider with a ton of ability and it has been great to be a part of his growth as a racer and witness all of his championships with the Rockstar Energy Husqvarna Factory Racing Team. Congrats to Colton and the team for a great season.”
Super EnduroCross Results – Round 5
1. Cody Webb, Sherco, 1-3-1
2. Colton Haaker, Rockstar Energy Husqvarna Factory Racing, 2-1-2
3. Tim Apolle, Beta, 4-6-5
Super EnduroCross Results – Round 6
1. Cody Webb, Sherco, 1-1-2
2. Colton Haaker, Rockstar Energy Husqvarna Factory Racing, 4-2-1
3. Max Gerston, GASGAS, 3-3-4
Super EnduroCross Championship Standings
1. Colton Haaker, 165 points
2. Cooper Abbott, 126 points
3. Trystan Hart, 106 points
About Michael Le Pard 7917 Articles
"Mr. Totalmotorcycle". Owner and Founder of Total Motorcycle. Supporting over Motorcyclists and Motorcycling for 23 great years. Total Motorcycle is my pride and joy and being able to reach out 375 million people has been incredible but I could not have done it without the support of my visitors, readers and members, thank you so much! You are making a difference to millions of riders worldwide. Thank you.
Website Facebook Instagram Twitter YouTube LinkedIn