Total Motorcycle brings you this week’s Inspiration Friday with a 125000km trip around the world on a KTM! When Aaron Steinmann got on his KTM 500 EXC to ride from the bottom to the top of New Zealand in 2016, he had no idea where the road would take him. Three years later, the likable Kiwi has completed more than 125,000km crossing 50 countries on all six continents on this planet.

While most motorcycling explorers prefer the added comfort and bigger fuel tank capacity of KTM’s twin-cylinder ADVENTURE machines, for riders like Aaron it is all about the extra fun a light and highly capable offroad bike can offer. KTM Blog caught up with the extreme world traveler after he had finished exploring the relatively unknown trails of Korea.

“I fell in love with motorcycling during a short trip to Laos many years ago. Instead of being stuck in a minivan full of backpackers, I rented a bike and decided to explore the area at my own pace. I always liked having my own freedom to do things and travel and a motorcycle was the perfect tool for me to do so.”

Catching the adventure motorcycling bug during his first trip to southeast Asia, Aaron set his eyes on his first major bike traveling project upon his return to New Zealand. 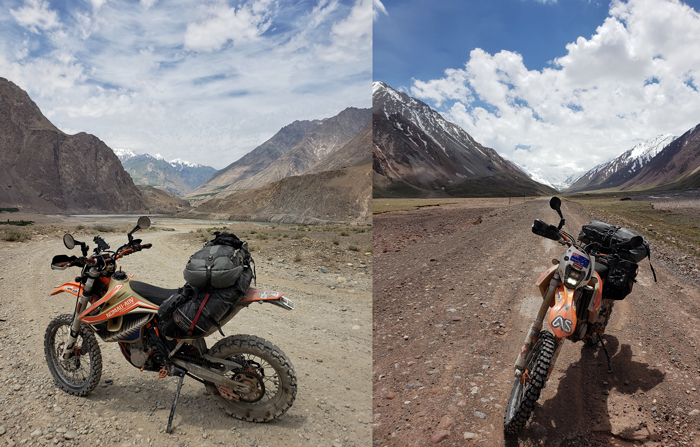 Why a KTM 500 EXC?
“I’ve lived in New Zealand for a few years and when I decided to move back to Oregon in the States, I thought what a better way to get there than ride a bike instead of dealing with another 12hr plane ride! The next question was which bike to ride…”

“I knew I wanted something light I could ride in the dirt and pick up easily with the extra bags on, even if I was on my own. I wanted something with enough power to keep things interesting and put a smile on my face. I also needed something simple to work on and the 500 kept ticking all the boxes. Besides, I always thought it is a great looking bike, so for me it was a pretty easy choice.” 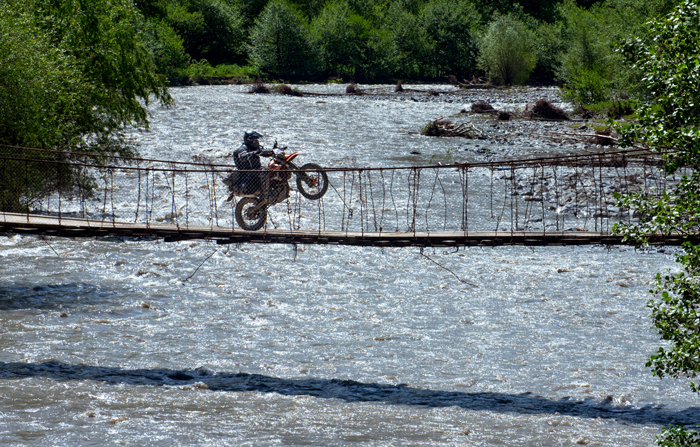 Picking up a KTM 500 EXC from a local dealer in late 2015, Aaron set off to plan the crucial details of his upcoming trip. “I bought my bike from a shop. I didn’t really consider any other options. The sales guy was trying to steer me towards a KTM 690 ENDURO R when I told him what my intentions were, but I insisted on the 500 EXC. He thought I was nuts but wasn’t going to turn down a sale.”

“I’ve always been telling myself that if I ever stayed long enough in one place to have a dog, I would name it Tess after a working dog my uncle had when I was a kid. Few weeks into my trip, I decided to name my bike Tess.” 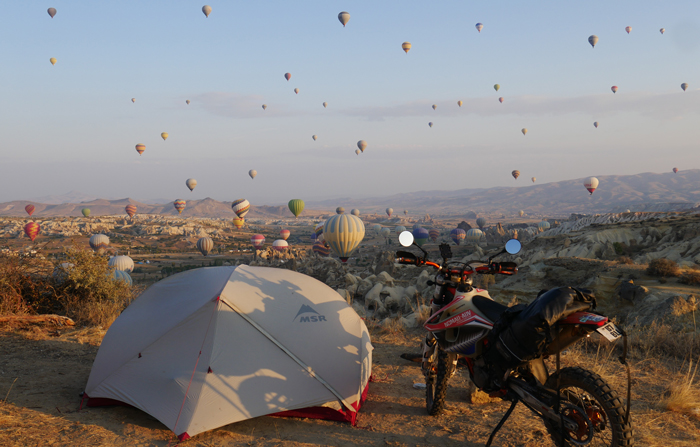 Traveling light…
Moving on with his planning and preparations for the upcoming trip, Aaron quickly realized that he had to pack and travel light… “During the initial part of my trip, I was planning to ride New Zealand from the bottom of the South Island to the top of the North Island. While preparing my gear, really it was working out what not to pack. Ever since then, selecting the items I am carrying on the bike is an ongoing process that changes depending on what countries I’m heading towards and what weather conditions I can expect.”

“For example, when I decided to ride solo up to over 5.500m on the famous Sairecabur volcano on the frontier between Bolivia and Chile, I left some of my gear in San Pedro de Atacama and did a day trip there. That was one of the highlights of my trip so far. The view was absolutely amazing, and it was one of the first times I felt I was somewhere very remote and alone. Also, my bike was a true blast to ride in that extreme terrain.”

Every end is a new beginning.
A few months after setting off for his return trip through New Zealand and onto US territory, Aaron finally reached the end of the first part of his trip. Little did the KTM 500 EXC mounted rider know that this was just the beginning of something even bigger.

“Reaching Portland, Oregon was another great moment in my trip. At that stage, I thought I was finished with traveling and the goal I had set was accomplished. I had so many people telling me that I had picked the ‘wrong’ bike, it felt awesome to have reached my goal. Soon enough the ‘Forrest Gump effect’ kicked in and I was back on the road heading north.” 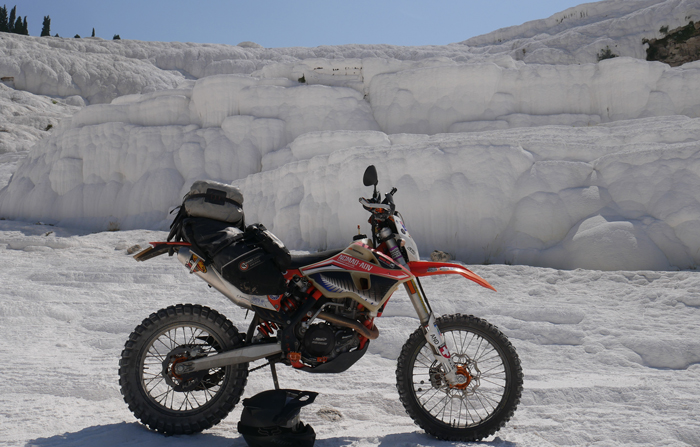 “Another highlight of my trip was reaching Deadhorse in North Slope Borough, Alaska. I was at the very top of the North American continent and it felt damn good. It was a stunning day and I did the turn and burn not staying there, so it was a 720km day on the saddle. I had great conditions and it was just a fun day on the bike.”

“That day I was having a bit of a race with some guys on big Travel bikes and throughout the ride back to Coldfoot I leap frogged them a few times. I would stop to take photos and they would pass me, but soon later I would catch up pass them back. Sitting in a bar in Coldfoot with a beer in hand I saw them roll in. They walked into the bar and one said: “Who’s riding the KTM?” I slowly raised my hand and they came over shook it and we spent the rest of the evening chatting.” 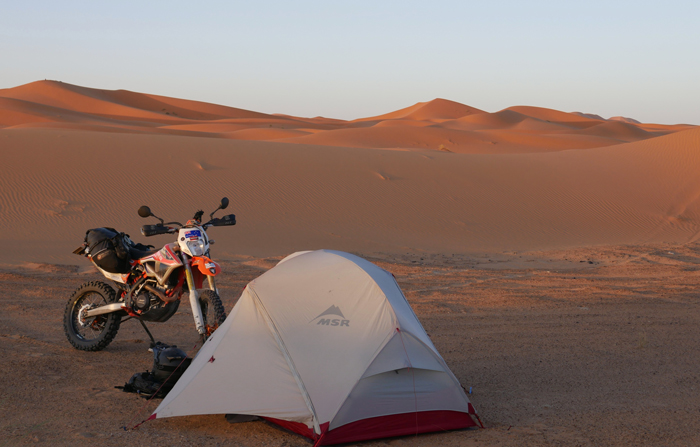 From Alaska to Sahara.
After three years traveling the world on his KTM 500 EXC, Aaron has collected a wealth of experiences riding in some of the coolest places on this planet. “Riding over the last rise and seeing the Sahara Desert was another massive moment in my journey. It is just a stunning view and I had the perfect bike to go play in the dunes. It was also one of those tick of the box moments as I had always wanted to see it.”

“My time in the Sahara Desert was another little milestone at that time. It was as far south as I was going to go before heading back to Europe and crossing Asia, so it was kind of a mental halfway point. Later during my trip, I would find out it wasn’t even close to halfway.”

“For years I’ve been reading stories of people riding in Magadan and the depths of Russia. For me, it took a year longer than I had originally expected but I managed to get there. After coming out of Morocco, I was originally planning to ride to Vladivostok. I had the choice to put in huge back to back days to make it across Russia or throw the plan out the window and take it as it comes.” 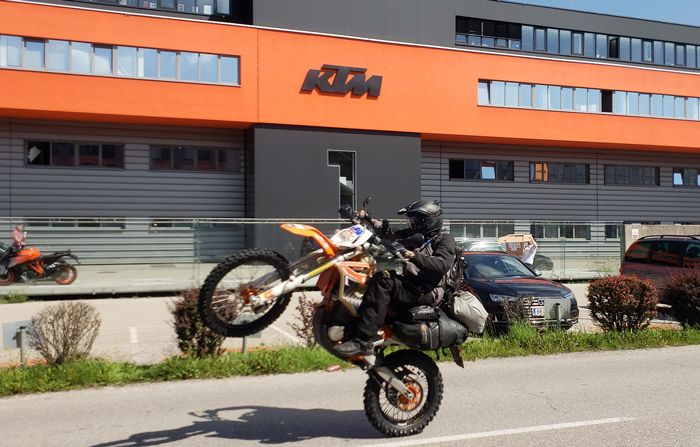 “I did the latter, which allowed me to ride the Trans European Trail through the Balkan countries. I stored my bike in Georgia for the winter. I pulled the motor out and pulled it to pieces, taking it back to the States in a couple suitcases to get it rebuilt there. Few months later, I flew back to Georgia to continue my trip. During my time in Europe, I went by KTM’s headquarters in Mattighofen. Pulling a wheelie down the road outside the factory was another highlight. It felt like taking my bike back to its birth place.”

“Throughout my whole trip, there’s a lot of moments I cherish… Waking up to the sound of a hot air balloon while camping in Cappadocia and riding with Dakar Rally racer Serkan Ozdemir in Turkey were some cool moments. Also, riding in Mongolia was awesome. The place is so vast and remote and allows you to choose your own path through the steppes. Riding there was simply fantastic, the food and toilets not so much.”

“Of course, I’ve met some great people along the way. I’ve had so many people reach out offering me a place to stay when I’m in their area. The people who walk up to me in a campground and say I bet you can’t carry cold beer on your bike, here have one. I love listening to other people’s stories of their travels.” 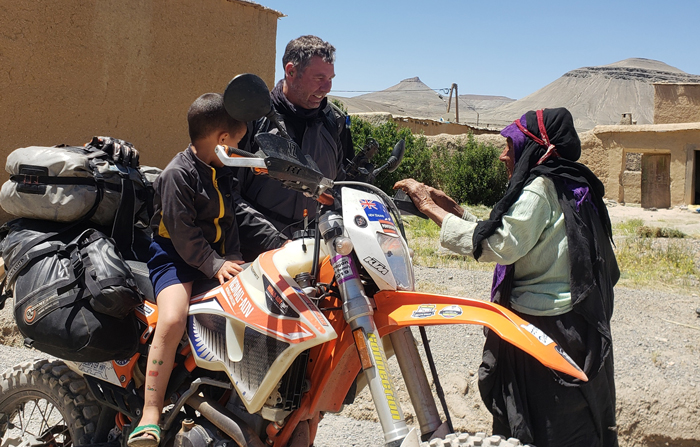 Bike maintenance basics
To ensure a problem-free trip, Aaron knows how to properly take care of his machine. “The number one question I get asked is about oil changes. I do a lot of them. I started doing them every 1.500km to 2.000km max, but now I will go for 3.000km without worrying so much. They are so quick and easy on my bike, so I don’t know why people think it’s a big deal. It also gives you a chance to give the bike a quick once over looking for anything loose etc.”

“If I am fully pinned in the desert or in race mode, I do oil changes more often. If I’m clicking some easy miles through a country like Uzbekistan or parts of Siberia – where it’s back to back 500km days with the bike just purring along at 110km/h – I stretch them. I always carry two spare pre-oiled air filters. I carry a front sprocket and I change it as soon as I see the teeth start turning around. Usually it’s around the 5.000 or 6.000km mark and that’s helped my chain and rear sprocket last longer. I use a Supersprox stealth sprocket from the KTM PowerParts catalog and they last amazingly.” 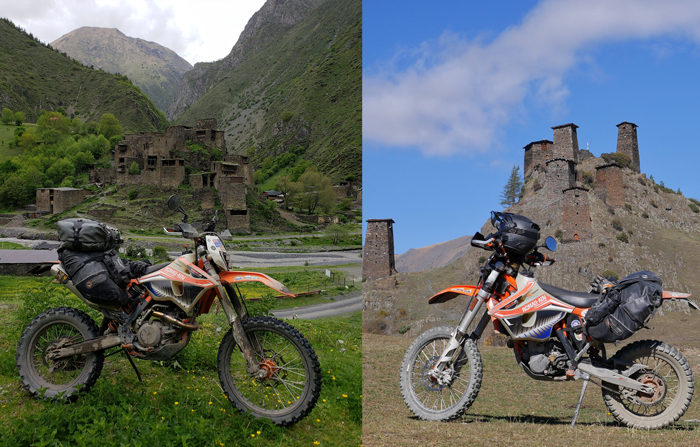 “I do a bit of preventative work also. Before I crossed into Morocco, I replaced the clutch thinking I might be doing lots of sand. Did it next to my tent and it wasn’t that hard. I did my first top end rebuild at 870hrs as the bike needed it. Then I did my second at around 1.300hrs but it didn’t need it. I did it because I did the bottom end and thought while it is all in parts I might as well do it all. At that time, I was heading from Georgia across Mongolia and Siberia so it was good piece of mind to know it was all done.  When traveling alone in those type of areas piece of mind is a massive thing.”

At the time of writing, Aaron is at Port Klang, Malaysia and waiting to get his bike delivered. Expecting to jump back on his bike soon, the extreme motorcycling traveler will continue his trip all the way back to where it all started from three years ago, in the bottom of New Zealand. 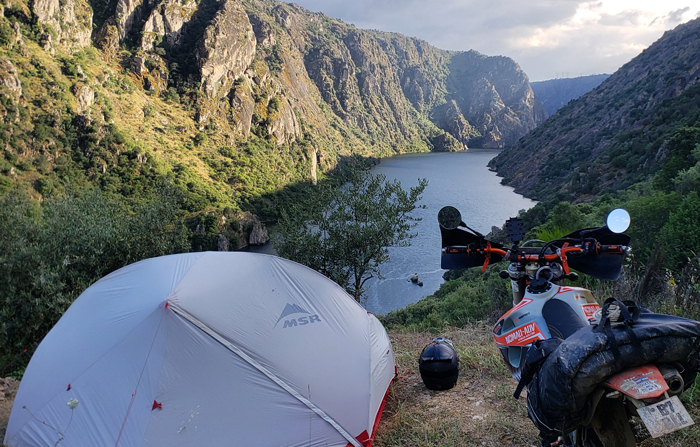 October 22, 2020 Michael Le Pard News Comments Off on You could be the lucky winner of the unique ‘Piro’ Replica R1 WorldSBK Bike

The Monster Energy Yamaha Factory MXGP team had to endure the highs and the lows of Grand Prix racing today at the fourth round of the FIM Motocross World Championship in Oss, The Netherlands, with […]