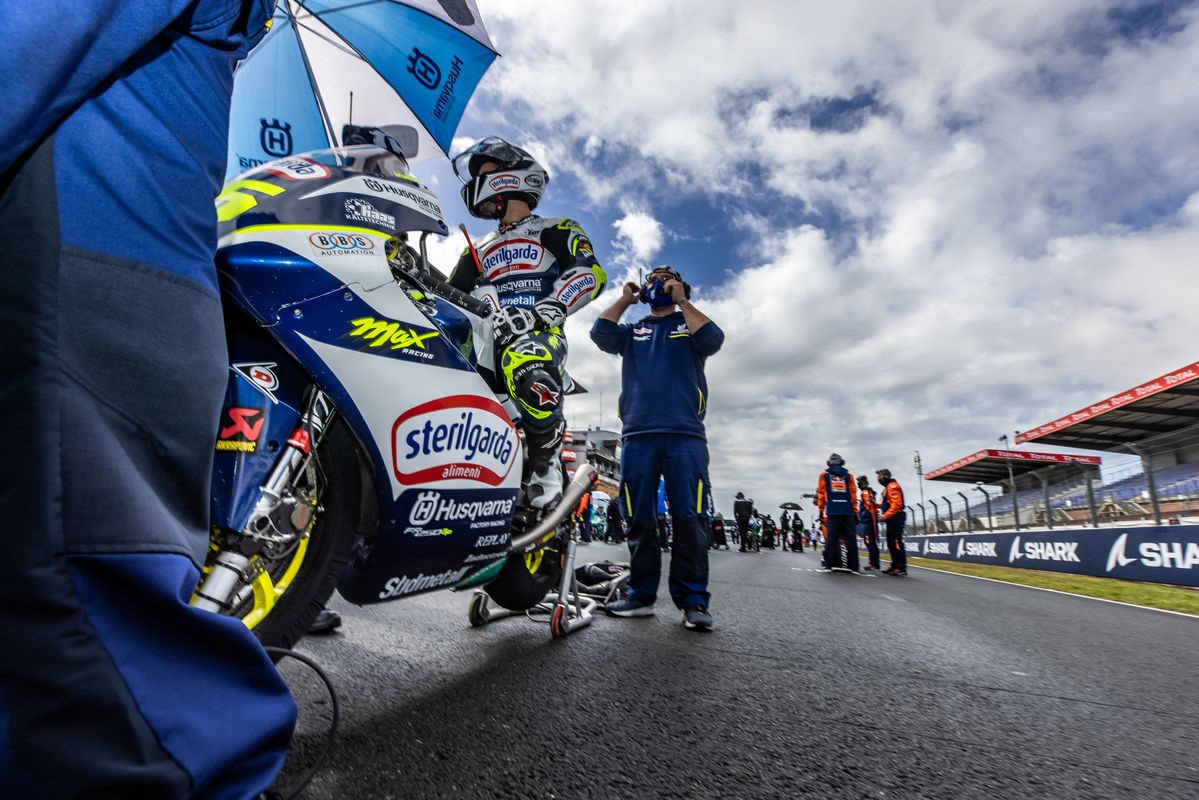 The Sterilgarda Max Racing Team travelled to one of the most famous motorsport venues in Europe for the fifth round of 2021 MotoGP. For twenty-two years Le Mans has staged motorcycle Grand Prix racing and initially welcomed the FIM series back in 1969. The 2020 edition of the French event brought back memories of the only wet race of last season, and the unstable climate for springtime meant 2021 delivered another damp run at Le Mans.

Fenati, who has previously shown his skills in the rain, hovered around the top of the time sheets throughout Free Practice as showers created confusing conditions. Teams were trying to judge the limits of grip and adhesion throughout the periodic showers as the track also began to dry in phases. Adrian Fernandez was able to adapt to the challenge in his first visit to the circuit and headed Free Practice 3 on Saturday morning.

On Sunday the 22-lap chase began with the track heavily dowsed, but rain clouds had passed and surface was slowly drying in places. Fenati launched away from 10th on the grid and immediately latched onto the leading group but the sodden asphalt began to catch out racers. Fernandez had started from the last row and made excellent ground to find his way to the top six as the leaders slowly and tentatively improved their pace.

Unusually for Moto3 the field became quite dispersed and tyre preservation came to the fore. Fernandez ran 6th and was the peak of the third group. Fenati was submerged in a busy fourth and with designs on the top ten. Fernandez held his nerve to score a top six and his very first Grand Prix points as Fenati had to accept 10th by the flag.

The Italian had been holding 4th place in the championship standings and keeps the same ranking, just three points from 2nd. Fernandez rises to 22nd thanks to his 10 points. The wide, fast curves and scenic back drop of Mugello now awaits the MotoGP series in two weeks time. The Sterilgarda Max Racing Team will venture to the popular circuit for their home Gran Premio D’Italia Oakley on May 29th-30th.
Adrian Fernandez: “Warm-up and the start of the race were really difficult with the track being so wet. I could barely do one lap! So, it was hard to understand how the race would go but step-by-step it came to me and I’m very happy to take 6th. I am pleased to take this result and of course for the team as well.”
Romano Fenati: “Not too happy with the result but the points were important for the championship. The conditions were tricky between wet and dry and my feeling was not great in the beginning but got better and better. The track was drying a lot and that made it hard to race with the rain tyre. Anyway we will look ahead to Mugello.”
Max Biaggi, Team Principal: “Today’s race was good for the team. Both riders made the points and an impressive ride from Adrian to the penultimate position on the grid to 6th without any mistakes. We’re happy he took his first points. Romano could have finished even better but 10th was all he had today and he’s still 4th in the championship. Hopefully he will have a boost in Mugello for his, and our, home Grand Prix.”
Results – 2021 Moto3 World Championship, Round 5
1. Sergio Garcia (GASGAS) 42:21.172, 2. Filip Salac (Honda) +2.349, 3. Riccardo Rossi (KTM) +5.589. 6. Adrian Fernandez (Husqvarna) +27.279, 10. Romano Fenati (Husqvarna) +36.616
World Championship standings
1. Pedro Acosta (KTM) 103pts; 2. Sergio Garcia (GASGAS) 49pts; 3. Andrea Migno (Honda)47pts; 4. Romano Fenati (Husqvarna) 46 pts; 22. Adrian Fernandez (Husqvarna) 10 pts.
About Michael Le Pard 7943 Articles
"Mr. Totalmotorcycle". Owner and Founder of Total Motorcycle. Supporting over Motorcyclists and Motorcycling for 23 great years. Total Motorcycle is my pride and joy and being able to reach out 375 million people has been incredible but I could not have done it without the support of my visitors, readers and members, thank you so much! You are making a difference to millions of riders worldwide. Thank you.
Website Facebook Instagram Twitter YouTube LinkedIn

Joe Wasson Returns To The Hare And Hound Series

May 16, 2018 Michael Le Pard News Comments Off on Galang Hendra Storms to Fifth as a bLU cRU Fightback Begins at Imola

It has not been the easiest start for the five Yamaha R3 bLU cRU Challenge riders to the 2018 FIM Supersport 300 World Championship, but all of that changed on Sunday at Round 3 of […]