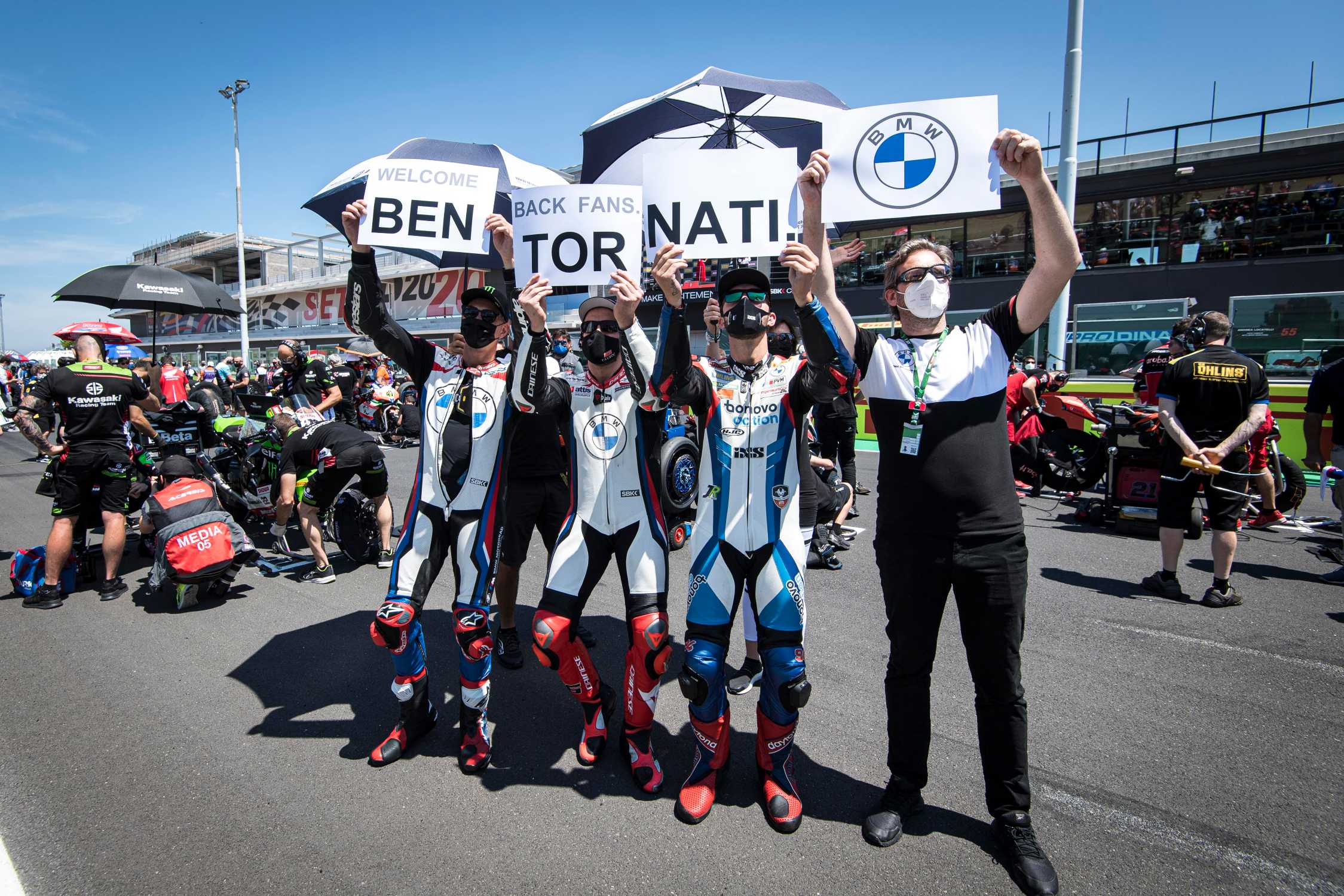 Misano. The FIM Superbike World Championship (WorldSBK) is at Misano on the Italian Adriatic coast, this weekend for round three of the 2021 season. Saturday proved to be a difficult day for BMW Motorrad Motorsport. Tom Sykes (GBR) and Michael van der Mark (NED) from the BMW Motorrad WorldSBK Team ended the opening race in eighth and tenth place. Jonas Folger (GER / Bonovo MGM Racing) finished 16th, narrowly missing out on points. Eugene Laverty (IRL), riding for the Italian RC Squadra Corse team, was unable to take part in Superpole and race one following a crash in the morning’s free practice session.

In Saturday morning’s Superpole, Sykes finished fifth on his BMW M 1000 RR to secure a spot on the second row of the grid. Van der Mark was 13th, while Folger came home 15th in Superpole. In the race itself, Sykes was running in the top six until the penultimate lap. However, he then dropped two places. Right from the word go, van der Mark set his sights on the top ten, crossing the finish line in tenth place after 21 laps of racing. Folger was 16th, missing out on the points by just one-tenth of a second.

Fans are permitted in the grandstands at Misano for the first time this season. They were given a special welcome from the starting grid by Sykes, van der Mark, Folger and BMW Motorrad Motorsport Director Marc Bongers – with signs which said “Welcome back Fans. Bentornati.”

Following his crash, Laverty was examined in the medical centre at the circuit and was not given the go-ahead to take his place in race one. He will now be examined again before the warm-up on Sunday morning when it will be decided whether or not he may take part in the Sunday sessions.

Quotes after race one at Misano.

Marc Bongers, BMW Motorrad Motorsport Director: “This Saturday was not our day. We definitely came here with greater expectations, but it emerged on Friday that we are not close to the podium places with both riders. Despite this, Tom still performed strongly. It was a shame that he was unable to hold on to sixth place in race one. In the case of Michael, it was clear yesterday and today that we were unable to really give him the right feeling. We will now analyse everything, but we cannot expect to make a really big jump forward by tomorrow. Despite this, we will try to get a top-six result. The only good news to come out of today is that Eugene is doing relatively well, despite his big crash this morning, and that he has not broken anything. That is the only positive news.”

Shaun Muir, Team Principal BMW Motorrad WorldSBK Team: “It was a very difficult day for us. I think the P6 position Tom was holding would have been a strong result for us but in the end he did not have enough tyre to hold off Bautista and Bassani, so it’s a shame he dropped to P8 as P6 would have been a good result for Tom. So, we will come back tomorrow, and we will fight again. Michael on the other hand really struggled; he didn’t look comfortable on the bike and hasn’t found the setting that he can attack with. And if he can’t attack going through the fast flowing corners he loses so much time and ends up battling with the company he was with, so he needs to work hard with his crew overnight and see what we improve on. I think overall a little bit disappointing but we will come back stronger tomorrow and hopefully we can improve on these results.”

Tom Sykes, BMW Motorrad WorldSBK Team: “We got a bad start to the race today and it definitely didn’t help our track position. We are very strong in some areas of the track but with our package we still lose in the area where I normally could gain the most on people. I saw that Alvaro Bautista was coming strong in race one and I changed my way of riding while still maintaining a respectable lap time and just kept the door closed as long as I could but eventually he managed to get through and pushed me a little wide. I tried to cut back on him which was not achievable and as a result lost a further spot to Bassani. We didn’t get what we hoped for today, but overall I feel we are improving our race performance and obviously we will go back to the drawing board tonight with a slightly different set up for tomorrow.”

Michael van der Mark, BMW Motorrad WorldSBK Team: “I’m not really happy with the result. In this morning’s FP3, we made a good step forward but unfortunately I did not feel as good in qualifying. So it was P13 on the grid. I had an okay start, but I especially struggled with the front. To be honest I was just riding around with a too slow pace. Now we have to sort out some problems; so we have a lot of work to do for tomorrow.”

Jonas Folger, Bonovo MGM Racing: “Unfortunately, we did not find what we were hoping for this weekend in order to have a better feel. Our pace was not bad, but I simply don’t have the trust in the bike to go for it in the opening laps. When I overtook Tito Rabat in the third-from-last corner, I unfortunately went wide. I just went for it, but unfortunately did not quite pull it off. Our times did improve, but it is still not what we were hoping for. Our goal was to finish in the top ten. Unfortunately, we were a long way off achieving that. It is a difficult time for us right now, but we are always trying to make the best of the situation.”

Eugene Laverty, RC Squadra Corse: “Thank you everyone for the kind messages and support on social media and of course a big thank you to all the volunteers, especially the marshals who reacted so quick and the paramedics who took care about me after my crash this morning. Fortunately everything is okay. I have had some scans on my back and my neck, I am pretty stiff and it’s not sure for tomorrow, but I have a medical check tomorrow morning, so let’s wait and see if all is clear, so I can race again tomorrow.”

RINS RETURNS TO MOTOGP DEUTSCHLAND IN GOOD FORM AFTER INJURY