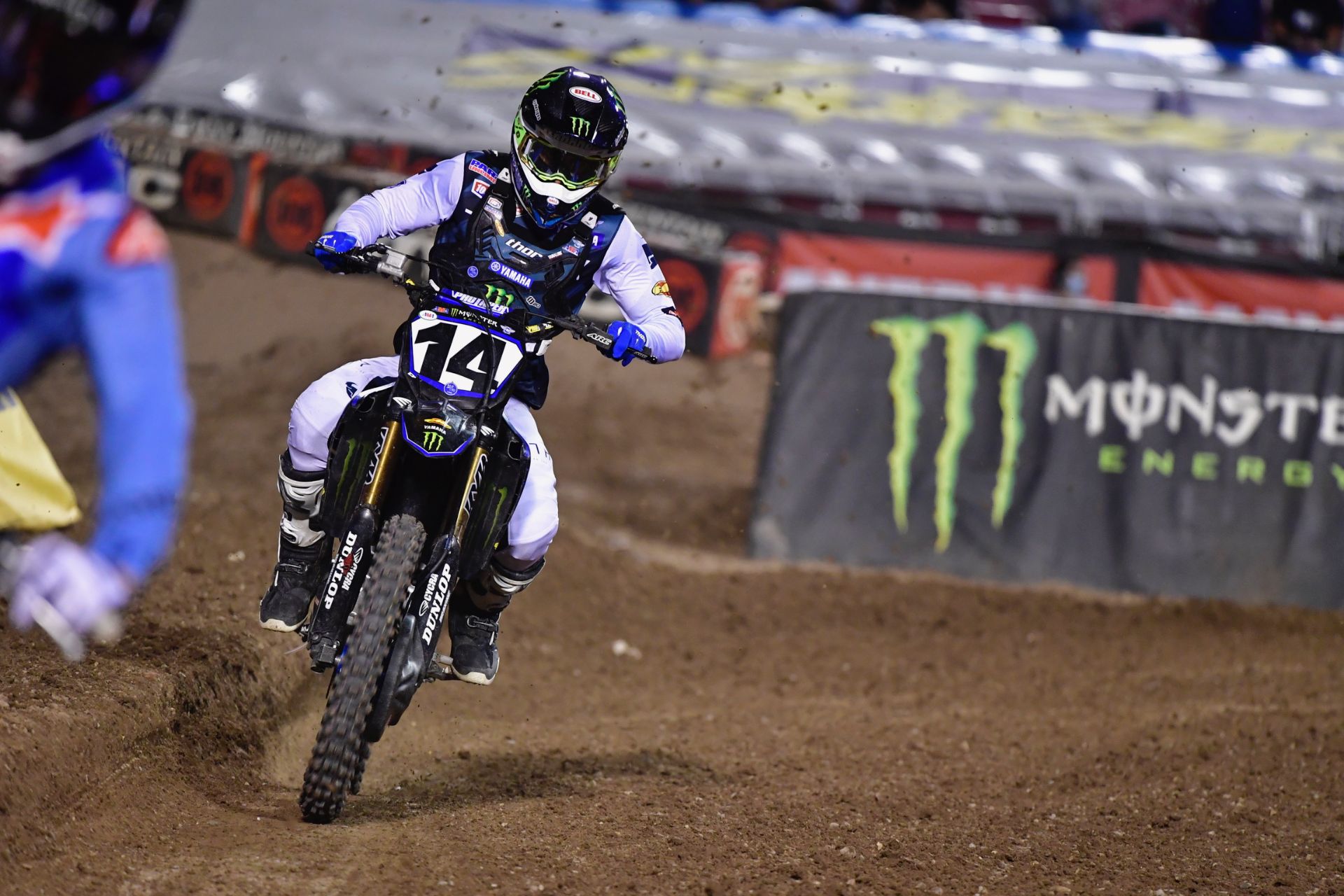 Monster Energy Star Yamaha Racing’s Dylan Ferrandis closed out a solid first year in the Monster Energy AMA Supercross Championship 450 class, earning the AMA Rookie of the Year and finishing just off the podium in fourth at Rice-Eccles Stadium in Salt Lake City. Coming off his first career podium, Malcolm Stewart followed it up with another great ride to finish fifth. Aaron Plessinger rounded out the season on a positive note, finishing the Main Event in eighth. The trio of Plessinger, Stewart, and Ferrandis finished fifth, sixth, and seventh in the championship standings, respectively.

The final round of the year started with a special surprise as Ferrandis was awarded the AMA Rookie of the Year for the 450 class. He proved he was worthy of the recognition with a fourth-place ride to close out the season. He got out to a great start but got pushed out slightly to start sixth. He had a few close calls but when he finally settled in, he started making passes and found his way to finish just off the podium in fourth. Ferrandis closed out the year an impressive seventh in the points.

After earning his first podium last weekend, it was obvious that Stewart was riding with even more confidence on Saturday night. He got out to an okay start in 10th and quickly made moves to the front. By lap seven he was up to seventh but wasn’t done yet, grabbing two more positions by the end of 29 laps to finish fifth on the night. He ended up sixth overall in the points – a career-best.

Like Stewart, Plessinger put together his best overall season aboard the Monster Energy Star Yamaha Racing YZ450F. Saturday’s race was challenging; a great start in the main in fifth, but Salt Lake City’s high elevation eventually took its toll. He held on the best he could, coming across the finish in a respectable eighth place. Plessinger finished fifth overall in the championship standings, a career-best for the Ohio native.

With the closing of one series brings the anticipation of another as the Monster Energy Star Yamaha Racing team gears up for the opening round of the Lucas Oil Pro Motocross Championship. The season opener will take place on May 29 at Fox Raceway in Pala, California.

“All in all tonight was good. We are not racing an easy class with a lot of champions, and the guys showed once again that we can do it. As they are learning the 450 class, we are learning the 450 class, and we’re getting better every week. Overall, the season was good. We’ll put our heads down to be ready for the outdoor season and come back for next year’s supercross season even more prepared to show them what we have got.”

“The race was extremely difficult. I don’t know why but I felt a little more tired compared to last week. The track was really tricky and I made a couple of mistakes, but I gave everything I had. I’m a little disappointed to not finish on the box, but it’s still a good result, and it was a good end to the season with two fourths.”

“I struggled a little bit at the start of the day but the team worked hard and we turned it around when it came to the Main Event. Looking back at the season as a whole – I had a great run and I’m more than blessed to have this team to support me. We got a podium and checked that off the list, and we ended the season with a top-five and had a solid run. We’ve got some things to work on but I feel really good overall about the year.”

“My night started off a little slow. Qualifying didn’t go the way I wanted, but we made some changes and that seemed to help a lot. I got a pretty good start in the main, but my body kind of stalled out during the middle of the race. Compared to the last two years, this season has been way better. I think last year I was 11th overall and this year I was 5th, so it’s been a great turnaround. I can’t thank the whole team enough because they’ve put the work in and it showed. I’m ready for what’s next with the outdoors and to show everyone what we’ve got.”

Team Suzuki Press Office – July 30. The final weekend of July and the first races of August is a Superbike weekend for Suzuki’s GSX-R1000R and GSX-R600 machinery. In America, Round 6 of MotoAmerica AMA […]

Dovizioso and Danilo Petrucci finished eleventh and twelfth respectively in the Czech GP held today at Brno Circuit.The rider from Forlì, who started from the sixth row of the grid after qualifying in eighteenth place […]

The Rockstar Energy Husqvarna Factory Racing Team travelled to Indianapolis, Indiana on Saturday for Round 11 of the 2019 AMA Supercross World Championship at Lucas Oil Stadium. Zach Osborne highlighted the team’s efforts with seventh […]