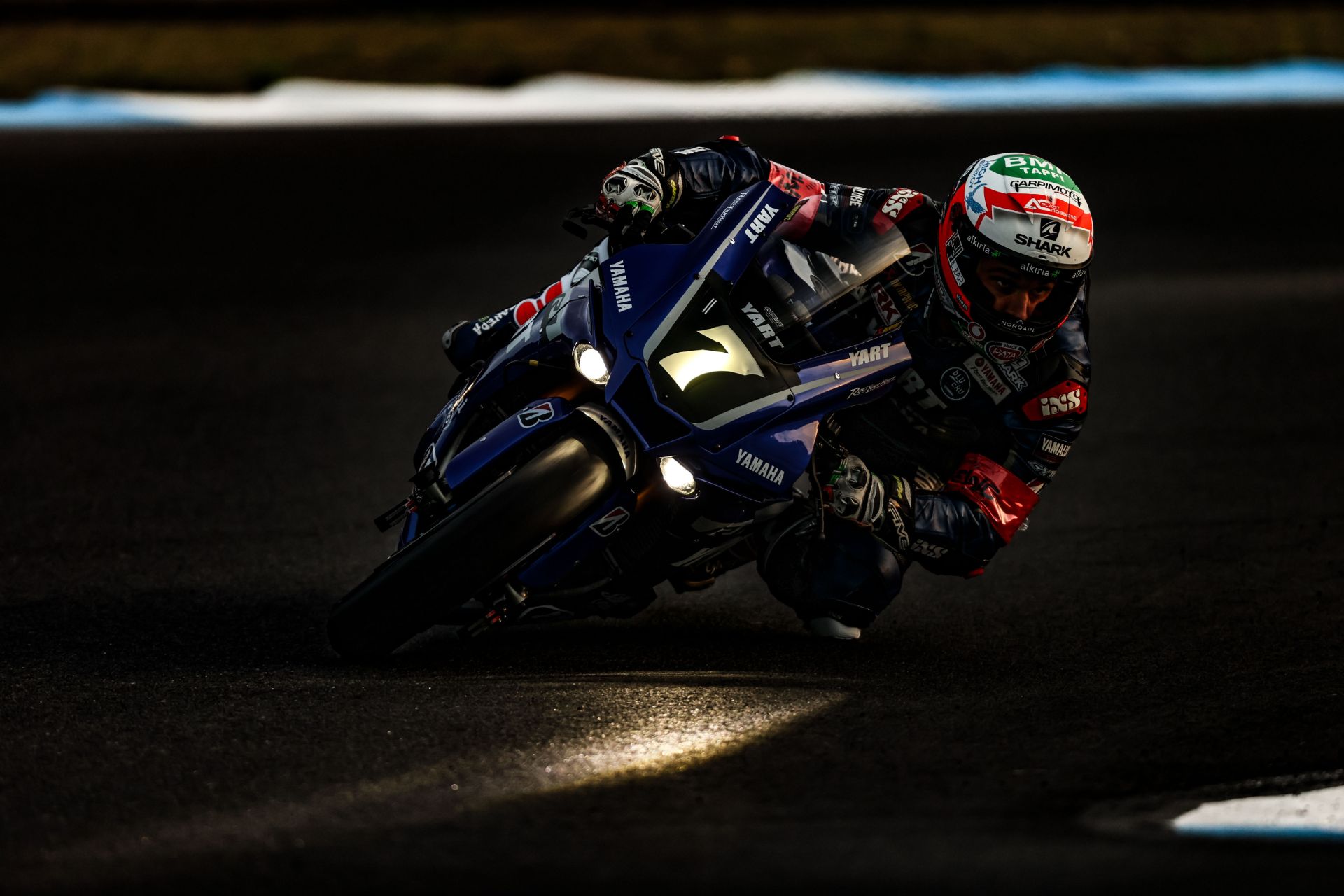 The Yamalube YART Yamaha EWC trio of Karel Hanika, Marvin Fritz and Niccoló Canepa will start from pole position for the Estoril 12 Hour after a dominant qualifying performance.

The team have been the squad to beat so far, topping every session held at the 2.5-mile Portuguese circuit, and that was once again the case in qualifying.

The two-part qualifying got underway on Thursday afternoon, with YART instantly putting themselves in contention with Hanika finishing the opening session second fastest. The 1:39.605 set by the Czech rider was only +0.601s from the leaders, with more pace left in the bike.

German rider, Fritz, then fired the team to the top of the timesheets. The former IDM Superbike champion had a strong start to his 20-minute session, setting the fastest time on his first flying lap. The 27-year-old was the first rider to break the 1:38 barrier, setting a 1:38.778, +0.957s quicker than the chasing pack, handing the team the advantage ahead of the third and final session, with Canepa the final rider to qualify.

His efforts were good enough to secure provisional pole at nightfall; the first Italian FIM EWC Champion finished the session in third, +0.729s behind the pacesetter, but helped secure the top position as the first qualifying session ended.

As the YART YZF-R1 roared back into action for Friday morning’s second and final set of qualifying sessions, the team knew they had to improve to claim the five extra championship points with just one-tenth separating first and second on the timesheets.

Once again, Czech rider, Karel Hanika, was the first YART rider on track but chose to sit out the opening few minutes to find a clear circuit. The decision paid off with Hanika immediately setting the pace. A 1:39.477 was already two-tenths quicker than his best efforts on Thursday, but he later improved to a 1:38.660, finishing second, just two tenths from the top time.

With two riders in the 1:38’s, Fritz chose to sit out the session, carrying his impressive Thursday time into Friday. With the German happy with his time, Canepa was the final rider to take to the track.

Like Hanika, the Italian’s first few laps were immediately faster than his Thursday time, setting a 1:39.193 on his fourth flying lap. The 2016/2017 FIM EWC Champion opted to stay on track for the full session and later improved his lap time to join team-mates Hanika and Fritz in the 1:38s, with YART the only team with all three riders to set sub-39 lap times. Canepa’s 1:38.929 put him at the top of the timesheets by +0.235s, assisting the team in taking another pole position this season.

The Wojcik Racing Team also had a strong qualifying, Gino Rea, Broc Parkes and Sheridan Morais put their YZF-R1 in fifth position as they prepare to battle for the Independent title this weekend.

Joining them in that battle is the Moto AIN Team. Roberto Rolfo, Robin Mulhauser and Hugo Clere will start tenth, finishing as the fastest Superstock team.

The 12-hour of Estoril will get underway on Saturday at a slightly earlier time of 08:00 and finishes at 20:00 local time.

Karel Hanika
Yamalube YART Yamaha EWC Team – Time: 1:38.660
“Since the start of the week we’ve felt really strong, we’ve had to change a few things to the bike and try different tyres to find the perfect option for the race. It seems step by step we’re getting there, Marvin put together a great lap time yesterday and then myself and Niccoló were able to improve our times this morning to keep pole. It will be important not to make a mistake in the race, and I will try to do my best and avoid making the same mistake I made in Le Mans and bring the bike home in first position.”

Marvin Fritz
Yamalube YART Yamaha EWC Team – Time: 1:38.778
“We worked hard from the beginning to find a good set up, everything is working well, and we were the only team to have all three riders in the 1:38s, which is really good for the race. We are confident for tomorrow’s race, the important thing will be not to make any mistakes during the 12 hours, but like I said the good thing is we have three really strong riders which means that we can fight for the win.

“Estoril was a fairly easy track for me to learn, it has a bit of everything which is hard for the body, but I really enjoy riding here.”

Niccoló Canepa
Yamalube YART Yamaha EWC Team – Time: 1:38.929
“I was struggling a lot with the set-up of the bike, the one-lap pace was good, but I was struggling with the race pace. Luckily, we were able to improve the feeling with the bike overnight, which allowed me to go faster and more consistent in the race runs, so I think I’ll be good for tomorrow’s race. We’re still not sure about the tyres as the stints are very long, and the track is very demanding for the rear tyre, but it will be the same for everyone, so we just have to manage everything, and I think we can be really strong and fight for the victory.”

Mandy Kainz
Team Manager, Yamalube YART Yamaha EWC Team
“The performance of the team, bike and tyres were amazing, we are the only team with all riders in the 1:38s, so all three guys are very consistent and good on the bike. So far, the week has been good, so we’re looking forward to the race.

“The Pole is nice because we can close the gap a little bit to the leaders, but with three pole positions in four races, we will have to see what happens. We will fight for the win and give everything we have.”

Round 5 of the 2017 Asia Road Racing Championship, the Indian Grand Prix, was originally slated to be contested at the Buddh International Circuit, but due to problems with the track, the event was moved […]