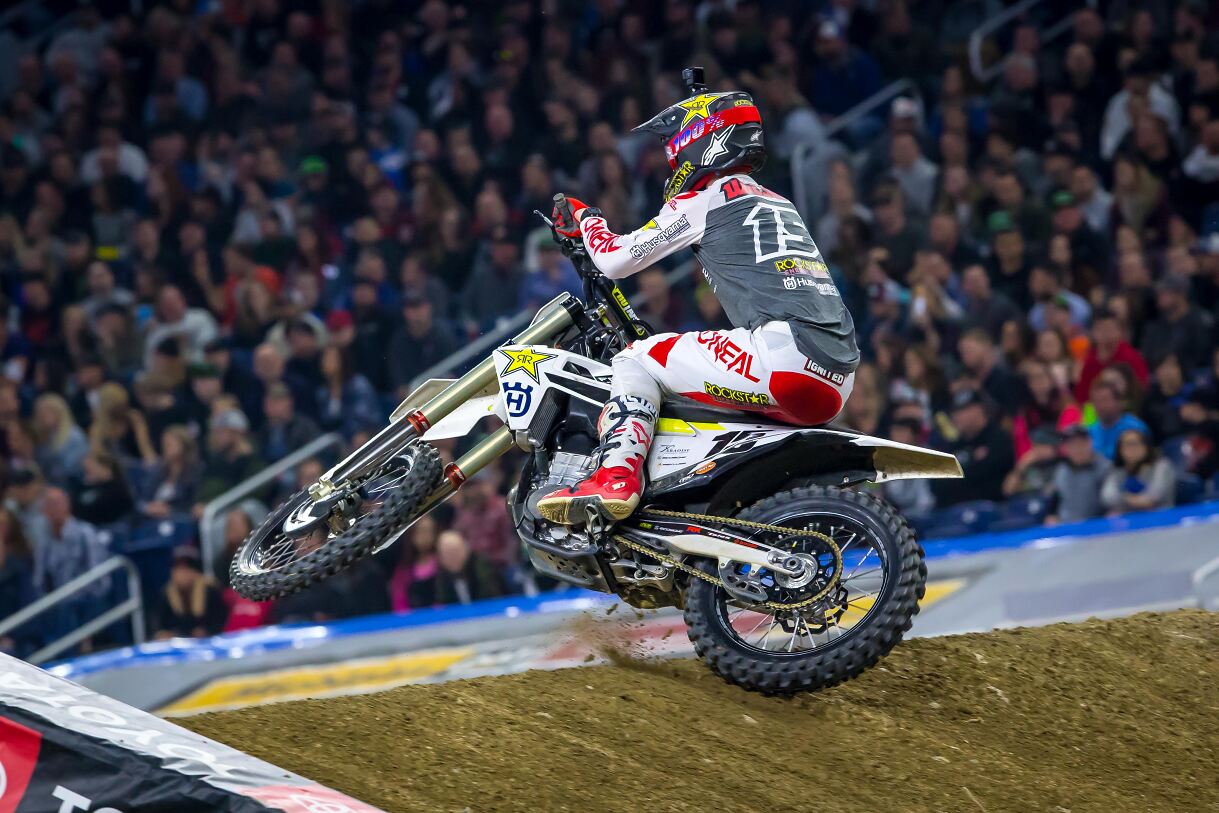 Round 8 of the 2019 AMA Supercross World Championship series took place on Saturday with the second round of the Triple Crown at Ford Field in Detroit, Michigan. Rockstar Energy Husqvarna Factory Racing Team’s Zach Osborne put forth consistent finishes to earn a top-10 overall in the 450SX class.

Making his second appearance back from injury this season, Osborne qualified 13th where he entered the first of three Main Events with a mid-pack gate choice. Osborne piloted his FC 450 into 13th off the start of Main #1. He battled just outside the top-10 for a majority of the race, ultimately finishing 11th. In Main #2, Osborne began in 11th and he quickly moved up to 10th on lap two. He made his way up to ninth behind Wilson and the teammates battled for a lap before Osborne overtook the eighth-place position. In Main #3, Osborne began just outside the top-10 once again, making his way into 10th later in the race. Osborne finished strong with 10th place in the final race, giving him a top-ten overall finish for the night.

“Overall it was a better night for me,” Osborne said. “I ended up 10th overall, so it’s a step in the right direction and something I can build from. Right now, it’s just getting laps and getting my fitness back, finding some settings that I’m super comfortable with again and finding my race trim. I feel like tonight with the Triple Crown, it’s a lot of racing and a lot of opportunity to be out there on the track and find my feet again. I had some pretty decent battles and was able to make some passes and kind of move around a little bit, which is a nice feeling. So, I’m looking forward to Atlanta, I think we can continue to build and make progress and the results will come soon enough.”

Meanwhile, team rider Dean Wilson powered his FC 450 to a seventh-place start in 450SX Main #1 and jumped into a three-way battle for sixth early on. Wilson ultimately dropped back to eighth and fought his way to a seventh-place finish in race one. In Main #2, Wilson got off to a top-five start and battled inside the top-six early on. He fell back a couple positions to eighth and finished ninth in race two. In Main #3, Wilson had a great jump off the line as he climbed his way into second on the opening lap. He dropped back to fourth early on and continued to fight for a top-five position. While battling in a group for fourth-place, Wilson went high in a turn and inadvertently made contact with the rider below him, causing Wilson to go down. He remounted to salvage 13th in the final race and 11th overall for the night.

“Today was about mixed emotions,” Wilson said. “I say that because I qualified second and my riding was really good in both sessions of practice but I struggled in the races tonight. I feel like with my riding I’m a lot more capable than that, so for the third race, I was pretty fired up and came off the start really good. I stayed in fourth the whole race right there and unfortunately, I made a mistake to allow Marvin [Musquin] by me and I went to square him up right before the whoops but I didn’t realize Kenny [Roczen] was right there and I kind of got cleaned out, but that’s racing. Eleventh overall is definitely not where I want to be, I’m very well capable of being on that box but I just need to make it happen.”

Rockstar Energy Husqvarna Factory Racing’s Jordan Bailey had a rough start to the night after going down twice in 250SX East Main #1, resulting in a DNF for the opening race. Bailey came back for Main #2, grabbing an 18th place start on the opening lap. He steadily climbed his way just outside the top-10 by lap six and from there, he held strong to finish 12th in the second race. In Main #3, Bailey got an eighth-place start and battled inside the top-10 early on. He eventually settled into ninth, where he would ultimately finish in race three. With 22-12-19 scores, Bailey finished 15th overall for the day as he sits just outside the top-10 in the overall championship standings after three rounds of racing.

“The first race I had an unfortunate two crashes, which resulted in a DNF,” Bailey said. “The second race, I charged up to 12th and the third moto I finally got inside the top-10 with ninth. Overall, it was a tough weekend and we look forward to the east/west shootout in Atlanta next weekend.”

Rockstar Energy Husqvarna Factory Racing’s Thomas Covington made the tough decision to sit out of Round 3 of the 250SX East Championship following a practice crash that took place during the week.

April 18, 2021 Michael Le Pard News Comments Off on SUPERCROSS HUSQVARNA PUTS ON A GOOD SHOWING DESPITE BAD LUCK IN THE MAIN EVENT

The Rockstar Energy Husqvarna Factory Racing Team concluded its week-long stay in Atlanta Motor Speedway on Saturday with Round 15 of the AMA Supercross World Championship. Jason Anderson picked up where he left off with […]