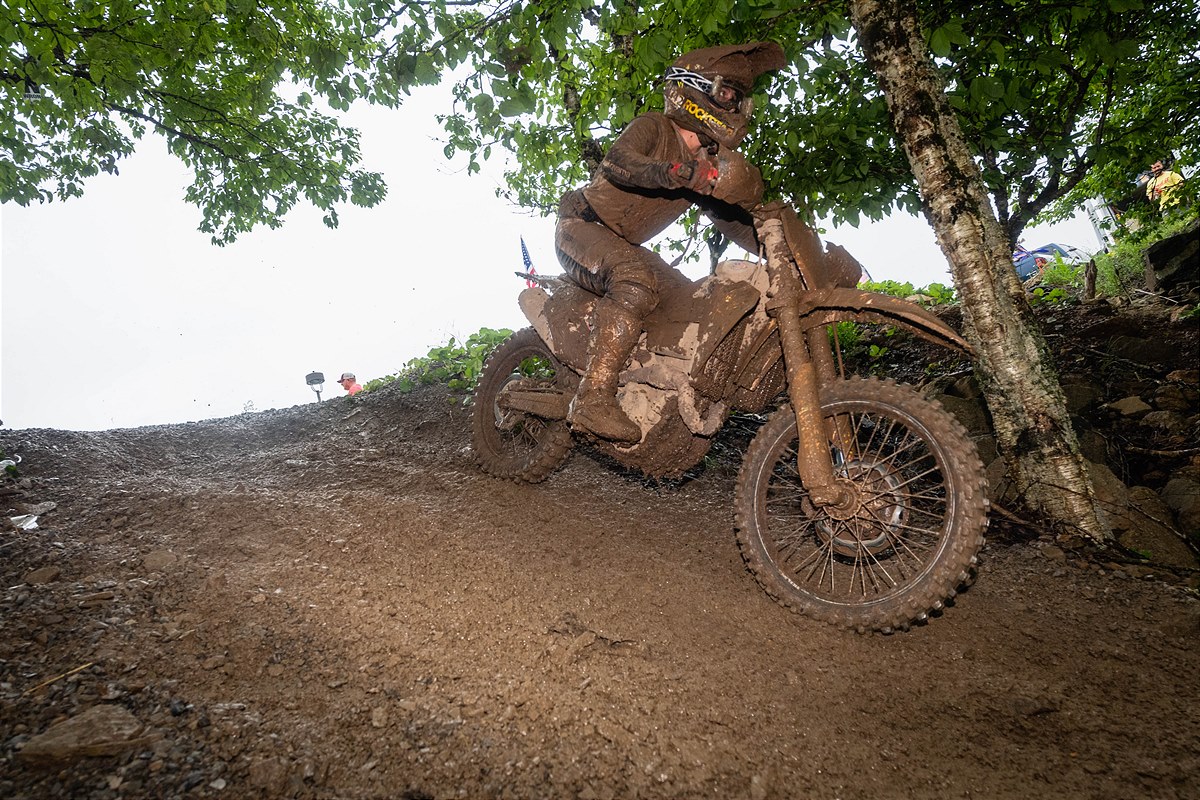 Rockstar Energy Husqvarna Factory Racing’s Craig DeLong had a solid top-five finish at one of the toughest races of the entire Grand National Cross Country (GNCC) Series circuit – the Snowshoe GNCC – in Snowshoe, West Virginia. Teammate Trevor Bollinger battled through injury to come away with a sixth-place finish in XC1 Open Pro and 11th overall at the ninth round.
DeLong grabbed the holeshot and led for a couple miles at Round 9. Upon getting passed, he then trailed the leader for the early part of the race aboard his FX 350. Around the middle of the event, he lost ground due to a few mistakes and dropped back to sixth. He was able to recoup a few positions and settle into fourth in XC1 until the checkers flew. The event marked his seventh top-five overall finish of the season, as well as seventh top-five result in XC1 Open Pro.
“I had a pretty good day,” DeLong said. “I got the holeshot and was able to lead for a couple of miles. I got back to second and then third for a little bit, then back up to second. I stayed there for about two laps, so that was pretty cool to be upfront with the leader. That was something I haven’t been able to do yet, so just getting better and gaining more experience, so that’s a plus. I had a couple mistakes that kind of set me back towards the end but still was glad I finished with a fourth [in XC1 Open Pro] and fifth overall. It was a pretty good day. I finished and got good points, so it was good.”
Not even sure that he would be racing this weekend, teammate Trevor Bollinger was determined to salvage points after breaking his hand at the last round – just three weeks prior. He held steady at seventh in XC1 for the majority of the race aboard his FX 350 before gaining a spot near the end of the demanding three-hour race.
“As you all know, I broke my hand three weeks ago at the last race,” Bollinger said. “As of Thursday night, I thought I wasn’t racing. I was just laying in bed – and it’s been a while since I’ve been here – so I wanted to come give it a go. I tried to ride Thursday and couldn’t ride, so I just toughed it out and ended up 11th overall, which I’m pretty pumped on. Just to get some valuable points and go into summer break, heal up and come out swinging.”
It was only a matter of time before Husqvarna Motorcycles-mounted rider Jordan Ashburn earned his first-career win. Earning five prior podium results this year, he was finally able to make this sixth podium result a win at Round 9 and he now assumes the championship points lead.
In the morning race, Husqvarna Motorcycles-mounted rider Tyla Jones scored fifth, tallying her ninth WXC top-five finish in as many rounds.
Next Round: Beckley, West Virginia – September 11, 2022
Snowshoe GNCC Results
XC1 Open Pro Class
1. Jordan Ashburn (HQV)
2. Ricky Russell (GAS)
3. Steward Baylor (YAM)
4. Craig DeLong – Rockstar Energy Husqvarna Factory Racing Team
…
6. Trevor Bollinger – Rockstar Energy Husqvarna Factory Racing Team
Overall Championship Standings
1. Jordan Ashburn, 187 points
2. Ben Kelley, 180 points
3. Trevor Bollinger – Rockstar Energy Husqvarna Factory Racing Team, 148 points
4. Craig DeLong – Rockstar Energy Husqvarna Factory Racing Team, 141 points
About Michael Le Pard 7905 Articles
"Mr. Totalmotorcycle". Owner and Founder of Total Motorcycle. Supporting over Motorcyclists and Motorcycling for 23 great years. Total Motorcycle is my pride and joy and being able to reach out 375 million people has been incredible but I could not have done it without the support of my visitors, readers and members, thank you so much! You are making a difference to millions of riders worldwide. Thank you.
Website Facebook Instagram Twitter YouTube LinkedIn

Yamaha put their best foot forwards at one of the coolest retro bike events. With six XSR700 Yard Built projects based on a Back to the Future theme, a host of sensational partners and much […]