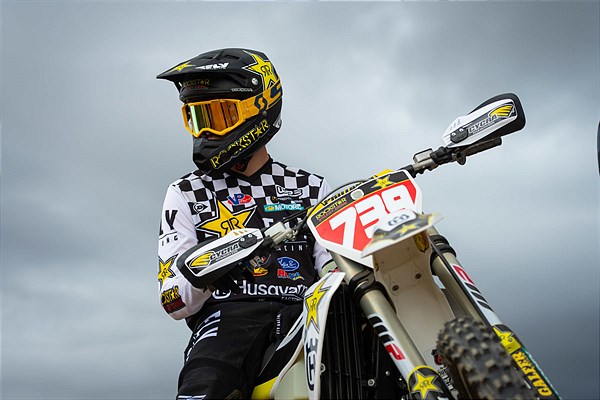 Rockstar Energy Husqvarna Factory Racing announced today that team rider Trevor Bollinger sustained a torn ACL and meniscus in his left leg as the result of a crash during the season opener of the AMA National Enduro Series on February 2.
After taking a week off, it was determined that Bollinger will need to undergo surgery next week to repair the torn ligaments. The North Carolina native was slated to compete aboard the FX 450 in the 2020 Grand National Cross Country Series and AMA National Enduro Series but he will be sitting out indefinitely as he goes through the recovery process.
Bollinger: “This off-season went very smoothly and I was feeling really good coming into the 2020 season. Unfortunately, I crashed in the third test at the National Enduro season opener and I tried my best to push through the rest of the day. After a week of intense swelling in my knee, I decided to get it checked out and now I will be heading into surgery next week. It’s a bummer for my team and myself as we had everything in place to be good year.”
About Michael Le Pard 4899 Articles
"Mr. Totalmotorcycle". Owner and Founder of Total Motorcycle. Supporting over Motorcyclists and Motorcycling for 21 great years. Total Motorcycle is my pride and joy and being able to reach out 330 million people has been incredible but I could not have done it without the support of my visitors, readers and members, thank you so much! You are making a difference to millions of riders worldwide. Thank you.
Website Facebook Instagram Twitter YouTube LinkedIn