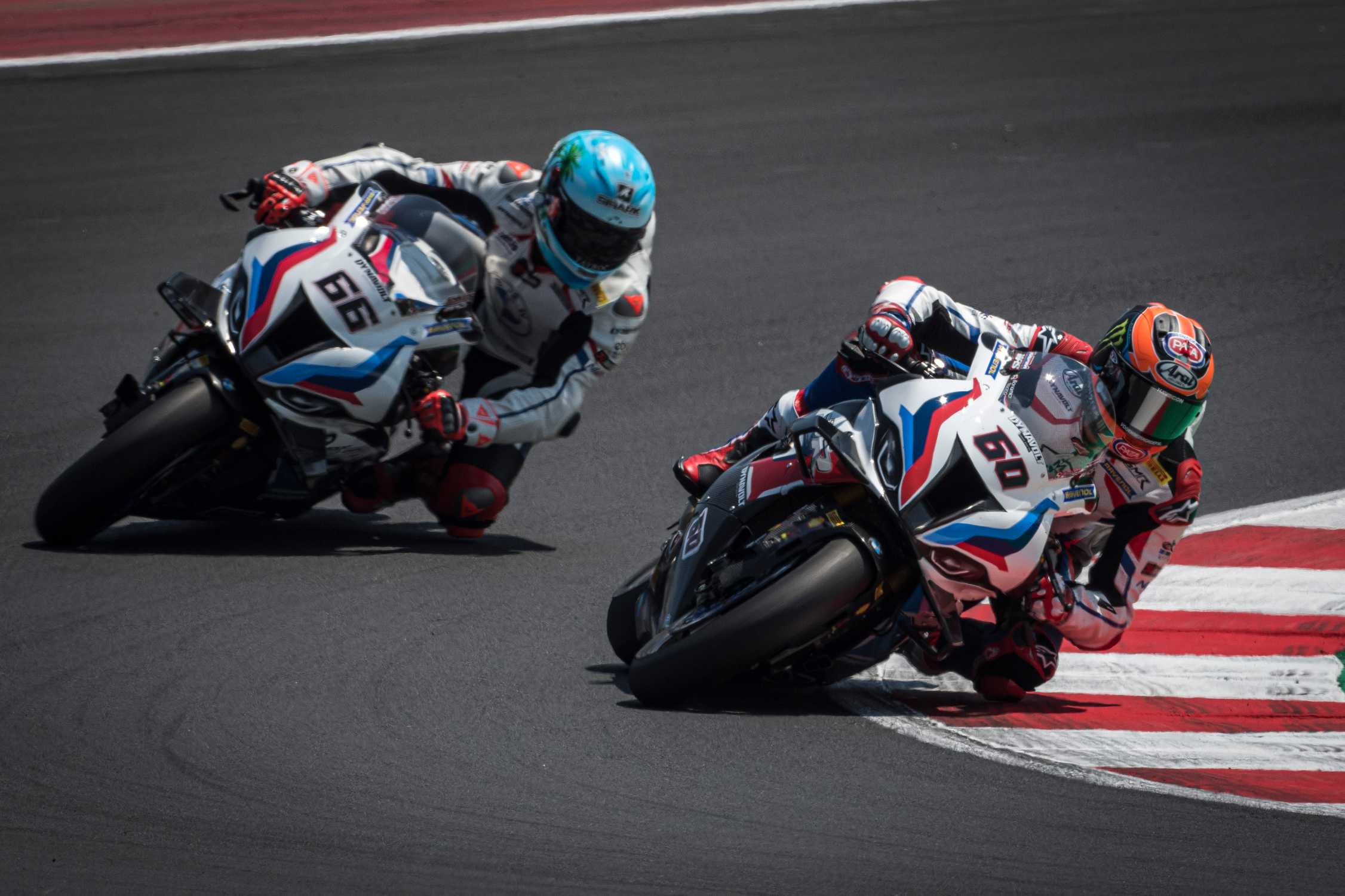 Munich. Donington Park (GBR) is the next stop for BMW Motorrad Motorsport in the FIM Superbike World Championship. The fourth round of the 2021 WorldSBK season will take place this coming weekend (2nd to 4th July) at the historic circuit in the heart of England. The BMW Motorrad WorldSBK Team will once again be competing with riders Michael van der Mark (NED) and Tom Sykes (GBR), as well as Eugene Laverty (IRL) and Jonas Folger (GER) for the BMW satellite teams RC Squadra Corse and Bonovo MGM Racing.

After the third round at Misano (ITA), WorldSBK took a short break with no races taking place over two weekends. BMW Motorrad Motorsport used that time for two days of testing at Navarra (ESP). The Spanish circuit has been added to the calendar this year and will host the seventh race event of the season from 20th to 22nd August. The tests provided an opportunity to continue development of the new BMW M 1000 RR, while simultaneously becoming familiar with the characteristics of the circuit.

The focus now switches to the upcoming weekend at Donington Park. The very first WorldSBK race took place on this track in April 1988. Donington has been a fixture on the calendar since then, even though the event had to be cancelled last year due to the crisis.

Quotes ahead of the Donington round.

Marc Bongers, BMW Motorrad Motorsport Director: “The first three events of the season showed us what areas we need to work on with our new BMW M 1000 RR, and we did that during testing at Navarra, among other things. We tried out and evaluated a few new parts in the chassis area, for example. Now we are looking forward to the race weekend at Donington Park. That is a traditional, old-school circuit and the layout has a really challenging mix of everything. There are fast, fluid sections as well as hairpin bends, climbs and slopes. We will see how well our M RR copes with this track. We are excited to see what the weather will be like at the weekend, as that can always be an unpredictable factor at Donington.”

Shaun Muir, Team Principal BMW Motorrad WorldSBK Team: “We’re looking forward to coming to the UK round of the World Superbike Championship. The Navarra test was quite conclusive for us. We have a better direction with the chassis after the chassis work both Tom and Michael have done. Hopefully we can transfer some of that into the Donington event. The forecast for the Donington event is quite changeable. Friday is fair weather but Saturday and Sunday it looks like we have some wet weather appearing just right during the mid-days. So we could be racing in changeable conditions with potential pit stops so we need to be ready for that eventuality. Overall as a team, we are in a good position, disappointed from Misano for sure, but we need to put things right for Donington and hopefully we can do just this.”

Michael van der Mark, BMW Motorrad WorldSBK Team: “It was good to have a test at Navarra, not only as we race there later this year, but also as we had faced some problems at Misano and BMW responded very quick so we had some new parts to Navarra test. I was happy with the test; it was a step in the right direction but of course you have to see if it also works on a different track but luckily we have Donington this weekend. Donington is fantastic; I really love these old-school circuits. I had some good results there in the past and I love the circuit and the history and after missing it last year, it is good to go back there now. Regarding the characteristics, for me the first part is the best; it is fast and flowing and a really exciting section of the track. The last part does not really fit to that but there you have some really good overtaking opportunities so the circuit is exciting in two very different ways.”

Tom Sykes, BMW Motorrad WorldSBK Team: “For me, the Navarra test was good for a number of reasons. First and foremost it was to continue the development of the new BMW M 1000 RR. We had some items that we needed to confirm there and we were able to do that. Then it was great to learn the circuit and get some data there for when we go back in August for the races. Now I am obviously looking forward to my home race at Donington. I’ve had a lot of success there in the past and I really hope that we can find the set-up to enable me to be more consistent and stronger over the race weekend. We need to work on finding those last little items now to put us in that position. The new M RR has had a big step in terms of engine and braking performance and quite a number of other things so we just need to find the last part of the jigsaw so we can use all of this. I am looking forward to going there and fingers crossed we can have some good British weather. But we take what we get and try to get a strong result.”

Eugene Laverty, RC Squadra Corse: “The three-week break has given me a chance to recover fully from my Misano crash. I feel fit and ready to get back in the mix. The majority of the Donington circuit has a flowing nature and that suits the BMW M 1000 RR well. That said, we will continue to work on our weak area of braking because that’s where the races are often decided at Donington Park. Three hard braking areas finish the lap and that will be the main focus of our work during Friday practice in order to be ready for the races.”

Jonas Folger, Bonovo MGM Racing: “I am already looking forward to Donington, even though it has been a while since I was there last – 13 years. As far as I can remember, it is a cool track. Donington is a real classic on the racing calendar. I hope that we can take another step forward after testing at Navarra and that we can improve.”

San Antonio, Texas (February 14, 2019) VP Racing Fuels, Inc., today announced they have acquired a new property and facility in Huntingdon, Tennessee, citing a favorable atmosphere for business growth and development. With all that […]

The new Honda connectivity system, specific for motorcycles and scooters, facilitates secure access to the most used functions of Android ™ smartphones   The ‘Honda Smartphone Voice Control’ System is available as standard equipment on […]