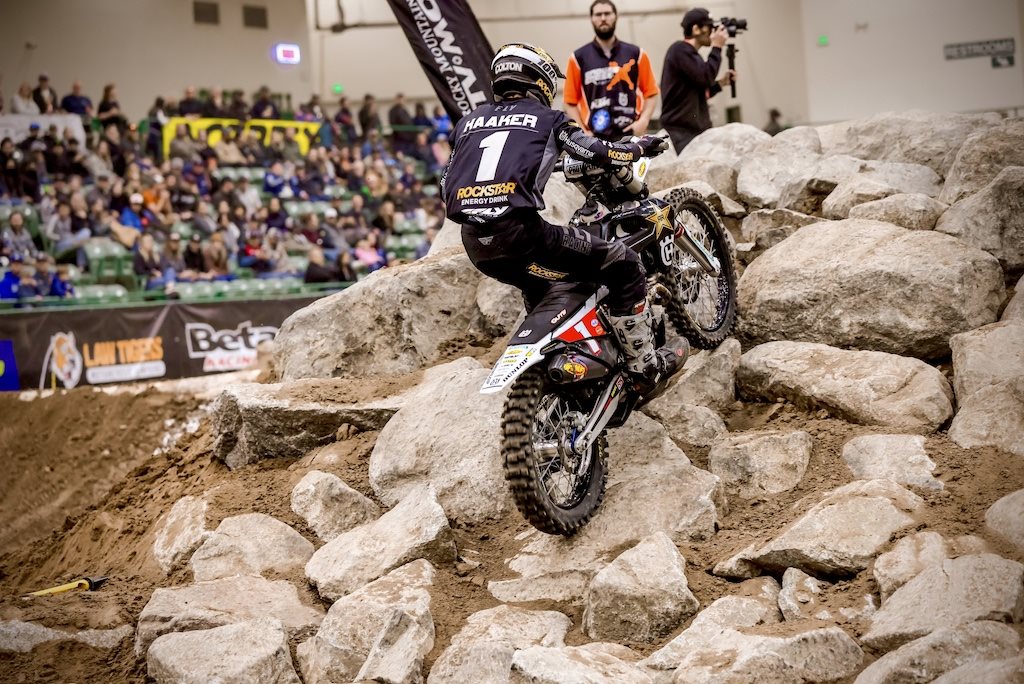 Rockstar Energy Husqvarna Factory Racing’s Colton Haaker had a consistent night of racing in Reno, finishing second overall with 2-2-3 Main Event finishes. Three rounds into the 2021 AMA EnduroCross Series and Haaker holds a nine-point lead in the championship standings.
He got off to a strong start, topping the hot laps with a fast time of 56.129. The Reigning Champion assumed the early lead in race one but a mistake in the matrix section caused him to drop a position. Unable to regain the lead late in the race, Haaker crossed the line in second.
With an inverted start in race two, Haaker got off to a mid-pack start and quickly battled to get around riders early on. By the time he made his way into second, race leader Trystan Hart had already extended his lead and Haaker held strong to bring it in for second.
In race three, Haaker got off to another mid-pack start and he quickly moved into third. He positioned himself to put pressure on the leaders mid-way through but a costly mistake took him out of the lead battle and he came through with a third-place podium finish. With 2-2-3 Main Event finishes, Haaker captured second overall on the night he maintains the championship points lead with three rounds remaining.
“Round 3 was a little bit rough for me but I’m happy to finish second overall on the night,” Haaker said. “The hot lap went great but I just couldn’t find my flow in the motos. We will regroup these next two weeks and come out ready at the next round.”
Round 4 of the 2021 AMA EnduroCross Championship will take place on Saturday, October 23 in Prescott Valley, Arizona.
Super EnduroCross Results – Round 3
1. Trystan Hart, KTM, 1-1-1
2. Colton Haaker, Rockstar Energy Husqvarna Factory Racing, 2-2-3
3. Cooper Abbott, KTM, 3-3-2
Super EnduroCross Championship Standings
1. Colton Haaker, 85 points
2. Trystan Hart, 76 points
3. Cooper Abbott, 67 points
About Michael Le Pard 7922 Articles
"Mr. Totalmotorcycle". Owner and Founder of Total Motorcycle. Supporting over Motorcyclists and Motorcycling for 23 great years. Total Motorcycle is my pride and joy and being able to reach out 375 million people has been incredible but I could not have done it without the support of my visitors, readers and members, thank you so much! You are making a difference to millions of riders worldwide. Thank you.
Website Facebook Instagram Twitter YouTube LinkedIn

A challenging opening round of the 2021 FIM Motocross World Championship saw Monster Energy Yamaha Factory MXGP’s Jeremy Seewer post solid points. He rounded out the top five in Orlyonok, Russia, with a 6-5 scorecard. […]